Skip to content
You are here
Home > Community > Celebrating the lives of elders Frank J. and Alice Billie 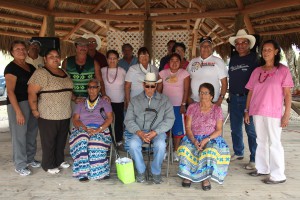 BIG CYPRESS — Family, friends and Tribal citizens acknowledged the important contributions of Tribal elders Frank J. and Alice Billie during a celebration of life and birthday party on Feb. 28 at the camp of Nancy and Michaelene Billie.

Born around the early 1920s, this brother and sister represent two of numerous children born to John Billie and Margaret Huff Dixie in their Wind Clan Camp in the heart of what is today Everglades National Park and the Big Cypress National Preserve.

While the actual time of their birth remains a mystery, government agencies have assigned them Jan. 1, 1925 and 1922 as their respective birthdates on record. Oral histories and a review of their accounts of actual events push these dates back a minimum of three to five years. Regardless, they represent a century of valuable Seminole history and have had a major impact upon the lives of current generations.

The life stories of Frank and Alice closely parallel the history of the Big Cypress Reservation, of which they are founding members. Their great grandparents had fled from the invading soldiers into the isolation of the Everglades swamp in an effort to avoid eradication or removal from their homeland. As small children, their parents and grandparents cautioned them against adopting outside ways and accepting education which could result in their assimilation and loss of culture.

During their early years, the Billie family hunted and trapped. They also sold their arts and crafts at the trading posts to supplement their needs. With the opening of the Tamiami Trail and encroachment of white settlers, their homeland was becoming restricted, and they began to rely more heavily upon the new economy that was evolving. Many of the people feared that cultural changes might follow.

A few Seminole villages had existed for several years in the isolated lands south of Lake Okeechobee, and the U.S. Government selected this area to set aside acreage for the Big Cypress Reservation. However, the Seminoles shunned intervention by the government in their lives, and it was not easy to entice them to move to this new place.

Through an unfortunate act of trickery, Alice became one of the first new residents at Big Cypress when she was hauled there for a visit on an old flatbed truck around 1939 or 1940.

It took all day for the journey on the muddy, pothole filled, log reinforced trace known as the Old Government Cut that joined Big Cypress with Immokalee. She was abandoned there to live off the land with the few families already in residence.

Relying upon the skills of her ancestors, she created a home for herself. During the years that followed, she was instrumental in building the Tribal community, and she raised a family.

A year or so later, her brother Frank followed. He was a deeply spiritual individual who studied traditional medicine and the cultural background of his people. His heritage was very important to him, and he felt a strong sense of responsibility to preserve it.

Both Alice and Frank felt that the knowledge of their ancestors had been entrusted to them to be passed to the future generations, and they spent a lifetime striving to achieve this goal.

Eventually, Tribal leaders like Josie Billie and his brother Ingraham Billie Sr. followed the slow migration to Big Cypress with their families. The community continued to grow and thrive. Influenced by the arrival of the Oklahoma missionaries, particularly Stanley Smith, the residents embraced Christianity, and Frank and Alice were some of the first members of the newly founded church.

While Alice supported her family doing physical labor on the farms near the reservation and selling the products of her traditional arts and crafts, Frank learned to operate heavy equipment. He became a skilled grader operator and was instrumental in building many of the roads on and near the Big Cypress Reservation through his job with the government.

When the first cattle arrived at Big Cypress, Frank began the foundation for his own herd and participated in the establishment of the cattle industry for the Seminole Tribe. From open range grazing to improved pastureland, herd management and selective breeding programs, Frank did his part to build the productive cattle and range program that exists today at Big Cypress.

With their families fearful of acculturation into outside society, the Billies were denied an education. They both recognized that reading and writing would be necessary to preserve their culture rather than destroy it. They welcomed the arrival of the new Ahfachkee School and spent a lifetime encouraging youngsters to get an education.

“I am very fortunate that Frank J. took my brother Timothy and I under his wing,” said former Chairman Mitchell Cypress. “With no children of his own, he opened his heart to us and became a driving force in the shaping of my life. He worked hard to keep me walking the straight and narrow and insisted that I go to school in Clewiston. He encouraged me to further my education in boarding school in Oklahoma and supported my decision to enter the military. He is one of my heroes, and I owe him a great deal.”

Guests came from all across Seminole Country to honor Frank and Alice on their special day and show their appreciation to the Tribal icons. Attendees enjoyed live entertainment and a hearty meal at the Nancy Billie Camp in Big Cypress.

Nancy and Michaelene Billie coordinated the preparation of a traditional dinner that brought back memories of days gone by and provided an opportunity for everyone to experience a portion of their past.

“Wise men have said that in order to know where we are going, we must know where we came from and have pride in our heritage,” Ronnie Billie Sr. said. “My mother and uncle always believed that it takes a village to raise a child and opened their hearts to their neighbors as they followed the camp tradition of sharing with each other.”

Big Cypress Tribal Council Rep. Mondo Tiger, nephew of both honorees, was one of several speakers who paid respects to the Tribal pioneers during their special celebration.

“When you’re a kid with no father growing up, you’re very appreciative of someone who fills that role,” Councilman Tiger said. “I hold a big, big spot for my uncle in my heart, Frank J. When I was growing up, he was working in the BIA (Bureau of Indian Affairs) roads department. That’s what got my interest in my early days. If it wasn’t for him, I would have never gotten into construction.”

The Big Cypress Councilman went on to discuss Alice’s impact on his life.

“She reminds me of my grandmother so much,” Councilman Tiger said. “It just seems like my grandmother is still around every time I see her. She always gives me words of encouragement and gives me a hug when we’re together. Those things mean a whole lot to me.”

Attendees waited in line to greet Alice and Frank, embracing them in thanks for the impact they made on their lives.

Special family guests included: Tribal seniors Nina and Ollie Tiger, who are both half-sisters of Alice and Frank; Tribal senior Thomas M.A. Billie, who is the son of Alice; Jane Billie, daughter-in-law of Alice; and Alice M. Billie, granddaughter of Alice, to name just a few.

Because of their limited command of English, Ronnie spoke on behalf of Alice and Frank.

“My mother and uncle often mention how much they miss the camp life they enjoyed while growing up,” Ronnie said. “Everyone was a part of the daily life from the smallest baby to the oldest person. Today, you have made them the center of the activities, and they are grateful for the opportunity to share in the lives of their many friends and neighbors.”

Naji Tobias contributed to this article.