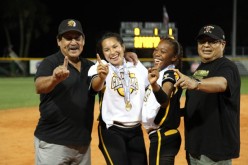 American Heritage claimed the Class 5A title with a dramatic 11-10 walk-off win against Belleview. It was the Patriots’ sixth state title, but the first for Tribal members Ahnie Jumper and Kiauna Martin.

Jenna Goodrich’s perfectly placed squeeze bunt scored a streaking Emily Rini with the winning run that capped a remarkable rally by American Heritage. The Patriots trailed by eight runs in the third inning, but they battled back with one run in the third, five in the fourth, one in the sixth and two in the seventh.

“The team wasn’t making plays, which was uncharacteristic for us,” said American Heritage coach Marty Cooper. “We were down 10-2, but our kids pulled it together, played hard and kept focused. I’m very proud of them.”

“We were down until the last inning when we won it,” Jumper said. “We never gave up. We fought the fight.”

American Heritage finished with a 25-6 record. The Patriots, whose state titles have all come in the past 10 years, received medals and the championship plaque following the thriller.

“It was very exciting,” Jumper said. “All our hard work during the whole season paid off. We always have energy on our Heritage team. There’s never a dull moment. The team was very confident. We never gave up.”

Heritage’s victory came in front of family members who joined players on the field for photos after the game.

“This is such a great experience for these girls,” said Moses Jumper, proud of his granddaughter Ahnie. “Even those who didn’t get to play a lot in the tournament, they got a rare chance to feel what it means to be the big winner. They know what pressure is at the highest level. That is something that is hard to teach. You got to get to the state tournament first.”

Ahnie Jumper and Martin, both freshmen, saw limited playing time on the varsity level this season. According to varsity statistics from the FHSAA, Jumper played nine games and had three hits in eight at-bats with one double and two runs batted in. Martin appeared in 11 games with two hits in six at-bats and seven runs scored.

Martin was used as a courtesy runner in Heritage’s 4-0 state semifinal win against previously undefeated Ponte Vedra. It was the first loss in 29 games for Ponte Vedra, which was ranked No. 4 in the nation before the game.

Similar to American Heritage, Class 3A’s Moore Haven enjoyed a memorable semifinal victory at Dodgertown. With Tribal members Skyler Burke, Darla Cypress, Sydnee Cypress, Kalgary Johns and Jessie Osceola in the lineup, the Lady Terriers earned a spot in a state final for the first time in school history by winning a 15-10 state semifinal marathon in 10 innings against Carrollwood.

Seminoles proved to be the difference, both in the field where the defense was super, and at the plate, where the Lady Terriers pounded 18 hits. In fact, it was freshman utility player Sydnee Cypress who broke open a tight game in the last inning with a bases-loaded, two-run double, one of her three hits for the day. Fellow outfielder Johns, a sophomore outfielder, had two hits, including a bases-clearing triple. She scored three runs and led all players with four RBIs. Darla Cypress, a junior third baseman, scored a game-high four runs and had one hit. Burke, a senior shortstop, had one hit.

Osceola was among Moore Haven’s top hitters all season, including the playoffs. The senior first baseman helped the team get to Vero Beach by going 6-for-12 in regional wins against Bradenton Christian, St. Stephen’s Episcopal and St. Petersburg Catholic.   Moore Haven finished with a 17-5 record.