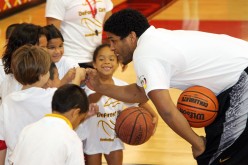 BIG CYPRESS — The contributions DeForest Carter made on the basketball court last winter were significant. The numbers don’t lie. He led Embry-Riddle Aeronautical University in several categories, including assists.

But perhaps his most important assist came May 8 when Carter lent his expertise and knowledge to about 35 Seminole youngsters at the first DeForest Carter Basketball Camp.

The Herman L. Osceola Gymnasium – where Carter spent much of his youth – was filled with kids who performed dribbling, passing and shooting drills while wearing white T-shirts adorned with DeForest Basketball Camp 2014.

“Every time I come back in here it’s awesome, so many memories in this place,” Carter said. “It’s a great feeling.”

After helping run drills, Carter spent most of the dinner break signing autographs for the players, some of whom were given basketballs with his signature at the end of the evening.

“The whole rez is proud of him,” said Gianna Wargolet, 17, who recently concluded her high school basketball career at Ahfachkee School. “That’s good that he’s giving back to the community.”

“He’s a role model to me. I look up to him,” said aspiring point guard Ricky Garza, 12, a cousin of Carter.  “This camp is amazing. He’s helped us out a lot.”

Big Cypress Recreation Department hosted and organized the free, three-hour camp. Site manager Josh Jumper said he wanted to kick off the department’s summer basketball season with something special. He knew Carter would be a big hit with the kids.

“We support him,” said Jumper, who started the camp by introducing Carter to the kids sitting at midcourt. “He’s doing a great thing. We want kids to go on and excel in their sports and especially in their education. He’s a fine example for the kids here on the rez. He’s a great role model.”

For a versatile player who thrives in so many areas on the court, it’s no surprise that Carter tackles a variety of academic endeavors off the court. He is working toward a degree in interdisciplinary studies with minors in business, homeland security and psychology.

An offseason injury prevented Carter from showing the kids the athleticism and moves that helped the 6-foot-1, 200-pound guard average a league-high 5.9 assists per game last season along with team-high averages in points (14.4), steals (2.7) and blocks (1.3), but the more important aspect of the evening for Carter was to teach drills, offer advice and positively influence Tribal youth.

“I want to inspire someone to have something that I had. It’s a great feeling overall that you’re doing something good,” said Carter, who had surgery more than a month ago after he broke a bone in his foot in a pickup game. He said he will be healed long before the start of the upcoming season.

As a kid, Carter didn’t have to look far for basketball inspiration. He remembers sitting in the stands watching his mother, Myra Jumper, and grandmother, Mary Tigertail, play in tournaments. Carter, who started playing basketball at age 9 after trying football, also had his brothers, Greg and Josie, to shoot hoops with as youngsters. Greg and Josie helped their younger sibling run the camp along with friends and Recreation staff.

“A basketball family,” Carter said. “When we were kids and (attended) camps, we always said we wanted to do our own camp. I’m happy I can share this with my brothers and my old friends from back in the day.”

The camp T-shirts made the event more memorable.

“(The Recreation Department) surprised me and made shirts for this. It’s pretty awesome,” Carter said.

Carter will enter his senior season with a good chance to become Embry-Riddle’s all-time leader in assists. Ranked second, he needs 93 more assists to move to the top. Of course, those don’t include all the helpers he dished out to his brothers when they were younger.

“When I was growing up, I wasn’t about the points. I’d hear my brothers talking about 30 points. I’d say, ‘Well, I had 17 assists. It wasn’t just you. I helped you out,’” said Carter, who is also in the top six all-time in blocks, free throws made and steals.

Carter, who hopes to pursue pro basketball after college, said he was grateful for being asked to run the camp.

“I’m just thankful I got to do it one time. If I get another opportunity, I’m jumping at it,” he said.