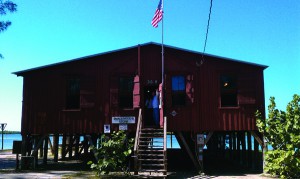 CHOKOLOSKEE — The beleaguered Smallwood Store, the historic icon that anchors the extreme Southwest Florida coast, remains in a battle against developers. Despite years of court actions, Highlands County land speculators Florida-Georgia Grove LLC (FGG) still wants to remove the store’s only access road and encircle the old wooden building with a marina-style resort on the edge of Florida’s wild Ten Thousand Islands, a fishing paradise where the Gulf and the Everglades meet.

McMillin and her husband, Gary, have been at the helm during the FGG saga, which threatens the store that was named to the National Register of Historic Places in 1974.

“We don’t have any money to go to trial,” she said. “And Collier County, which has a stake in this issue since that’s who owns the road (Mamie Street, the oldest road in Collier County and named after her grandmother), doesn’t really care at all. We’re stuck between two evil forces, neither of which is on our side.”

More than $6,000 in donations to the Smallwood Store’s legal fund were collected and offers of pro bono help came in from out-of-town law firms.

“But where are they?” she said. “They call and I never hear from them again. And, of course, the money has gone for legal expenses.”

The FGG property, which was purchased from the Seminole Tribe of Florida a decade ago, is now an unkempt eyesore, McMillin said.

“The grass and weeds have grown up as tall as the fence,” she said. “It looks horrible. We see people pull up in their cars, take one look at that mess and turn around, afraid to come further down the road to where we are.”

Several months ago, FGG – under orders from Collier County – made an effort to clean up the lot, which also contains lime rock boulders. Despite warnings regarding the site’s archaeological significance, FGG shaved the landscape. State and federal archaeologists were stunned. They investigation is ongoing.

“I haven’t heard a word about any of that,” McMillin said. “They came out here, picked up a bunch of evidence in their bags and left. It’s like those (developers) can waltz in here and do whatever they want without recourse.”

“Actually the incident at Chokoloskee at the property next to the Smallwood Store is still under investigation as far as I know,” said Paul Backhouse, Ah-Tah-Thi-Ki Museum director and Tribal Historic Preservation Officer, whose staff is assisting in the probe. “Nobody is sure what is going to happen next, but I know the U.S. Army Corps of Engineers is definitely interested. It’s still an active case.”

In fact, believing that Mamie Street was a private road that they owned and not a county road, FGG installed a fence across the road, blocking access to the store for six months – a move that was later reversed by a Circuit Court judge who ordered the road repaved and access restored.

“They wouldn’t do what they promised to do,” she said.

Calls to FGG offices were not returned.

Ted Smallwood’s trading post was the original post office for this part of Florida. Storekeeper Smallwood was the first white man in the area to trade with the Seminole Indians following the Indian Wars, permitting the Natives to camp on his property and giving them monetary credit. It is also famous as the site where outlaw Ed Watson was gunned down by a vigilante force of locals – a legendary incident explored by author Peter Matthiessen in his 2008 “Killing Mr. Watson,” part of his “Shadow Country” trilogy that won the 2008 National Book Award.