BRIGHTON — Ahfachkee School and Pemayetv Emahakv Charter School squared off for the first time in FHSAA history on April 3 at the Brighton Reservation’s Ollie Jones Memorial Park.
The Charter School’s head softball coach and athletic director Darryl Allen came up with the idea for the schools to play each other.

“It’s such a great opportunity to take these two schools and put them together,” Allen said. “We wanted to make the game competitive, yet still friendly at the same time. It’s absolutely unbelievable.”

The matchups turned out to be the home and season finales for both Brighton teams. Both teams’ eighth-grade players and their parents were honored for their contributions in a special pre-game ceremony.

Brighton Councilman Andrew J. Bowers Jr. said the occasion will be a day to remember.

“It’s sure something new for us,” Councilman Bowers said. “I’m sure we’re going to remember who won and who lost this game. We’ll also use the friendly competition as a way to bring more unity within our Tribe.” 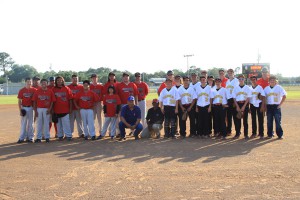 The Charter School Seminoles’ first-year coach Harry Tewksbury said his team came into the game on a mission to protect the home turf.

“The game against Ahfachkee was hyped around here and made the atmosphere here very exciting,” he said. “We didn’t want to lose at home for one, and we didn’t want to lose to them. We weren’t sure what we were going to see against them, so we put our best pitcher (Elijah Finney) on the mound to start the game.”

Tyrus Billie was Ahfachkee’s starting pitcher for the game.

“They had a lefty on the mound, and we hadn’t seen that all season,” Tewksbury said. “Their pitcher did pretty well. We just hit the ball a little better than he pitched.”
Cleckler agreed.

“I thought Tyrus Billie had a good outing, even though the score didn’t reflect that,” Cleckler said, attributing some of Ahfachkee’s challenges to struggles among their defense.

Finney, who recorded six strikeouts in two innings of work, was replaced by relief pitcher Zach Hudson in the third inning for the Charter School.

In the game’s final three innings, Hudson had seven strikeouts and allowed only one walk to close it out in five innings.

“Zach has pitched in the past, but not at all this season for us,” Tewksbury said. “He did a wonderful job for us out there on the mound.”

“For a young team, I was impressed with Pemayetv’s defensive fundamentals and aggressive play on offense,” Cleckler said of the Charter School, whose entire batting lineup recorded at least one hit in the game. “Their coaching staff seemed to be a good group of individuals who are teachers of the game. With coaches like that, players will grow and get even better.”

“We struggled to hit the ball, as their pitchers had good control and speed on their pitches,” Cleckler said. “Defensively, we struggled to make the routine plays to keep runners off the bases. The game got away from us, and we didn’t recover from that deficit.” 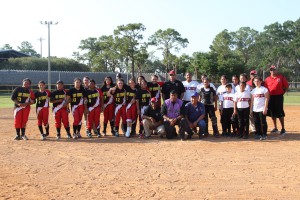 The Charter School Lady Seminoles’ softball team closed its season in style, scoring 14 runs in a three-inning stretch to cap off an amazing comeback.

Down 6-2 in the second inning and 7-5 in the fourth inning, the Charter School made quite a comeback, closing out the game at 19-8.

“I knew we were tough and that we’ve persevered all season, but that was a big test for us,” Allen said. “Being prepared to handle pressure situations for a team this young is amazing…We’ve been known to go on scoring tears in late innings of games to pull away from teams, so that didn’t surprise me.”

That blast in the park was followed by two doubles from Taylor Fulton and Katie Bert, with Fulton’s run putting Ahfachkee up 2-0 in the top of the first inning.

The Charter School countered with two runs of their own in the bottom of the first inning, thanks to a series of hits from the Brighton team, who willed their way to score on Tommie, Ahfachkee’s starting pitcher.

Tied at 2-2 in the second inning, Ahfachkee tacked on four more runs, which included runs scored from Dayra Koenes and Savannah Tiger. The Charter School faced a 6-2 deficit in the bottom of the second.

“The emotion of my team worked against us when Danni Jae hit that home run,” Allen said. “I felt like we were slightly shell shocked. We normally start fast and take the other team’s will from them. It went in reverse this time for us, where we had to come from behind.”

The Charter School scored three more runs off Tommie, bringing the game to 6-5 going into the third inning.

Ahfachkee scored another run in the top of the third when Alyssa Osceola ran herself to home plate, giving Ahfachkee a 7-5 lead. The score would stay the same until the fourth inning, when the Charter School began scoring in the bottom of the inning.

With two outs in the bottom of the fourth, Shore smacked in two RBIs off Tommie and sent runners Sunni Beardon and Shae Pierce home to tie the game up at 7-7.

Ahfachkee managed to salvage the inning, thanks to a timely stop by Ahfachkee’s catcher Sabre’ Billie, who tagged Shore out at home plate to end the fourth.

The fifth inning proved the most pivotal for both teams. The Charter School’s superior defense ruled out Ahfachkee’s trio of Osceola, Koenes and Chelsey Alvarado. With two runners on base, Alvarado was tagged out at second by the Charter School’s Kalgary Johns as she tried to steal first base.

It was Ahfachkee’s final chance to hold steady in the game, but the Charter School’s batters scored six runs in the bottom of the fifth, thanks to runs from Chastity Harmon, Camryn Thomas, Martina Herrera, Crysten Smith, Jaylynn Jones and Shae Pierce. The fifth inning ended with the Charter School up 13-7 – an 8-0 scoring run in two innings played.

In the sixth and final inning, Ahfachkee scored one more run, thanks to an RBI double from Fulton, who sent Tommie home to cut the Charter School’s lead to 13-8.

Ahfachkee would get no closer than that the rest of the way. The Charter School benefitted from a series of fielding errors from Ahfachkee’s defense, with Kailin Brown, Harmon, Herrera, Jones, Pierce and Smith scoring in the final inning.

“I know we are young, but I also know we’re tough, and winning is embedded in this group of girls,” Allen said. “To me, the only negative to playing this game is that someone had to lose. How can you go wrong with these two reservation schools playing each other? These young ladies, coaches, communities will talk and remember this forever.”

Many staff members were glad to witness the Tribal schools’ sports teams make history.
“It was good to see the teams come out here to play,” said Ahfachkee School principal Lucy Dafoe. “We told our kids to just go out there, represent and do their very best. I was glad to see them play hard until the end.”

“It’s really a dream come true,” she said. “We know we have athletes on both of our reservations, and we knew it was going to be competitive. When these players’ children and grandchildren play each other one day, they will always remember the history that came out of this game. We’re very, very proud to be able to host two Indian schools on our reservation.”

Allen said there could be a home-and-home series each year between the Brighton and Big Cypress softball and baseball teams. If it happens, the games will either be played in Big Cypress or on a neutral field next year.

For now, Allen would like to soak in the moment.

“The meaning of this game shows the growth of these two communities,” Allen said. “To play an official FHSAA softball and baseball game amongst each other and in a Tribal community speaks volume for long-term growth.”