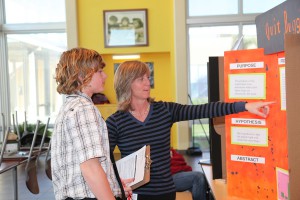 While only the advanced science students are required to participate in the Science Fair with their projects counting toward their grade, science teachers Kelly Bass and Renea Finney encourage others.

“We like them to participate even if they aren’t required,” said Bass, the middle school science teacher. “The kids are encouraged to participate. It is a lot of work but it is worth it because what they are doing is they are actually learning the scientific method hands on.”

For students the Science Fair project began way back in August at the start of the school year.

“The first week school they get a dateline and a timeline and a guideline and on that they have a date of when everything is due,” Bass said. “Most of these kids have already done a Science Fair project before. We actually start them in the fifth grade, so they have an idea; it’s more of a kit type thing where Mrs. Finney actually kind of holds their hand and they go through every step, so when they get to me it actually should be pretty second nature.”

Over the five months leading up to the actual judging, students started thinking of ideas and eventually picked their topics to begin the scientific method for their project.

Eighth-grader Melany Williams stumbled upon her topic even before school started.

“I heard it on television and thought it would be interesting to see if it actually worked,” Williams said.

“There’s not a lot of data to it but the project itself is a wonderful idea,” Bass said. “And it was something she came up with all by herself.”

Williams’ hypothesis was correct: the greater the facial symmetry, the more tips earned.

“Usually beauty is an opinion but facial symmetry is a fact and I just found it really interesting,” Williams said.

The judges were just as impressed with Williams’ topic, along with many others that focused on sports and music.

Mrs. Finney, fifth-grade science teacher and science fair judge, said she was really intrigued with the ideas the students came up with this year.

“They are not all consumer projects this year,” Finney said. “A lot of the students thought out of the box and picked something of interest to them such as sports.”

Zach Hudson used his love of golf as a topic for his science fair project, “Driving Range.” Hudson’s project focused on whether the price of the golf ball truly made a difference when it came to driving distance. Hudson and his father are huge golf enthusiasts, so Hudson figured he might save some money by conducting a project on the topic.

“I’ve always been a golfer and I’ve spent a lot of money over the years on golf balls, so I wanted to see which ball gave you a bigger bang for your buck,” Hudson said.

Hudson’s trials discovered that the most expensive golf balls did not get the most yardage but that the medium-grade balls finished with the longest driving distance. Along with saving money from what he learned, Hudson found a way to enjoy his project.

“I enjoyed it a lot,” Hudson said. “It was exactly what I was looking for. In years past I used to hate doing Science Fair but this year it was fun.”

Brothers Michael and Erik Garcia, both interested in music, decided to do projects relating to music. Michael focused on the guitar to see if the sound waves of a high note on the instrument were longer than a low note. Brother Erik chose to incorporate the science of botany into music to see what genre of music helped plants grow the fastest.

None of the students expressed any signs of nervousness while judges Finney and teacher Heather Dobbs roamed the rows questioning them on their methods and variables.

Students who place first or second will go onto districts held in Glades County at the Doyle Conner Building in Moore Have on Jan. 26.

“We have had some really good projects,” Bass said. “The kids put a lot of work into them and some of the boards are beautiful but creative. Each year they progressively get better and more difficult and get more creative.”