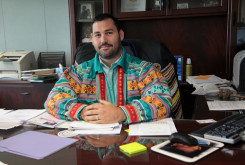 MILWAUKEE — Treasurer Pete Hahn was honored by the National Center for American Indian Enterprise Development for his outstanding leadership to the Seminole Tribe. The organization named him one of the 2014 “Native American 40 Under 40” award recipients.

Hahn received the award at the 39th annual Indian Progress in Business Awards Gala (INPRO) held Oct. 8 during the Reservation Economic Summit at the Potawatomi Hotel and Casino in Milwaukee, Wisconsin.

The Seminole Board of Directors nominated Hahn. Criteria include demonstrating initiative and dedication and providing significant contributions to the community.

“It’s great to be recognized for contributions I’ve made in the past, and it will push me to continue to contribute in the future,” said Hahn, 33. “It’s nice to know the Board and the selection committee feel I am worthy of this award.”

Hahn, who was appointed Treasurer in August after serving as deputy treasurer since 2007, began his career with the Tribe as an intern before graduating with a bachelor’s degree from Haskell Indian Nations University in 2005. He is a member of Leadership Broward Class XXV and is an ambassador for Americans for Indian Opportunity.

“With his recent promotion, I knew he’d be a shoo-in,” Hollywood Board Rep. Steve Osceola said. “He got the education to be prepared to step into this job. He is a success story for the Tribe and our youth by stepping into the role of leadership. He has the full support of the Board and we are very proud of him.”

Because of the opportunities he was given while growing up – including education, sports and recreation – Hahn said he can now give back to the Tribe through his leadership position. He wants to help show Tribal youth how the Tribe operates.

“I want young people to know education, work and dedication are important and that the Tribe provides opportunities to be a part of the business itself,” he said. “So take advantage of what’s offered because no one will take better care of the Tribe than Tribal members.”

Hahn looks forward to staying connected to the economic development divisions of other Tribes throughout Indian Country, many of which he met at INPRO.

“The Seminole Tribe is perceived as one of the leaders for gaming, business and overall economic development in Indian Country,” Hahn said. “Our first thought is how our decisions will affect the Tribe and whether something is in our best interest. But then you think about the ripple effect; all Tribes are interconnected and decisions can have an effect on other Tribes.”