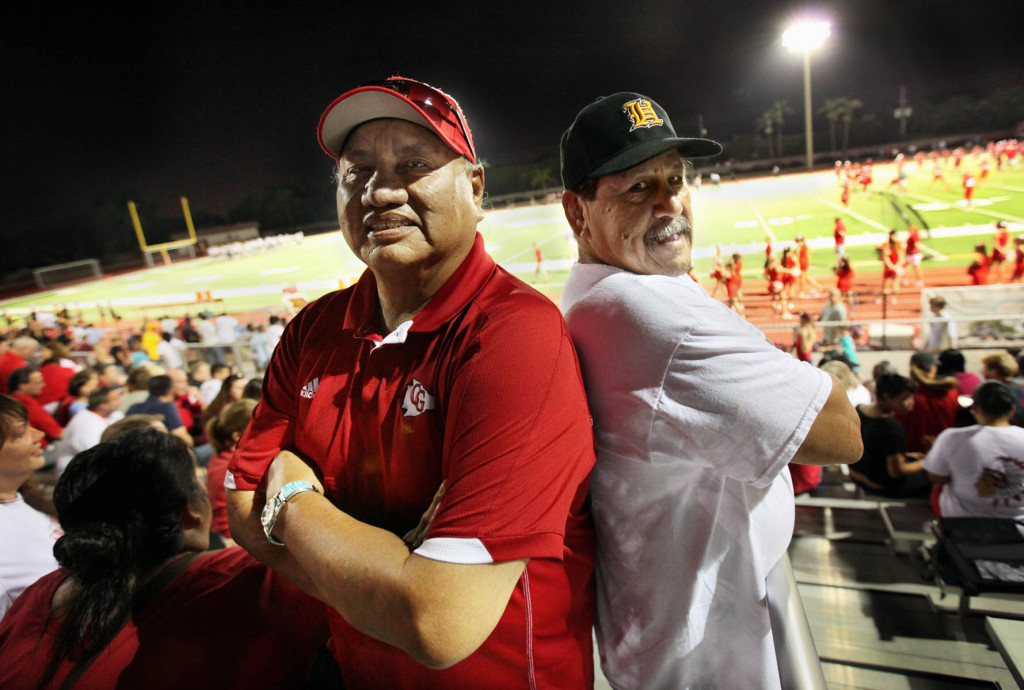 Recently, while sitting in bleachers at a high school football game in Fort Lauderdale where Max’s grandson Trevor Osceola played on the special teams unit for Cardinal Gibbons and Moses’ grandson Andre Jumper played defense for American Heritage, the two admitted that while much has changed in the past half century, boys are still boys.

“Our own competition days may be over, but tonight is the first night our grandsons go head to head. We can still have fun with it,” Max said.

In the end, American Heritage won 71-24 but both grandfathers were happy just to watch their protégés from the cheering section.

Max and Moses used to joke that the day would come when they would need seat cushions to watch their grandchildren play. Max said he daydreamed about including leather bleacher covers just for the two when he helped build the ball field on the Hollywood Reservation.

Both went to Stirling Elementary then Driftwood Middle School and played on Hollywood Optimist club teams before winning spots as varsity football players in the mid-1960s for McArthur High School. Together with three other Seminole teammates, Joe Osceola, Mike Tiger and Moses Osceola, the bunch dubbed “The Fearsome Five” helped win the 1967 District Championship.

“My late mom (Laura Mae Osceola) used to say, ‘It doesn’t ever matter if you are a Seminole and people talk down to you – go take it out on the field,’” Max said.

Later, Max and Moses took their talent to college fields. Both played at University of Tampa and Oklahoma State University and a handful of colleges and other sports, along the way. Eventually, Moses chose baseball and a degree in physical education which he parlayed into the top spot as director of Recreation for the Tribe. Max quit playing sports to major in business at the University of Miami which helped forge his future as a Tribal Councilman.

When Max was inducted into the Broward County Sports Hall of Fame in 2013, he picked Moses to stand by his side.

“In our family, sports are part of who we are,” Moses said.

The next competition between the first cousins will likely come in January when Max gets knee replacement surgery. Moses already had one bum knee replaced but said he may have the other fixed just so he and Max can challenge each other for first place – that is, who will get back on his feet first.

“Our football coaches used to say, ‘Talk is cheap. You gotta walk the walk,’” Max said.