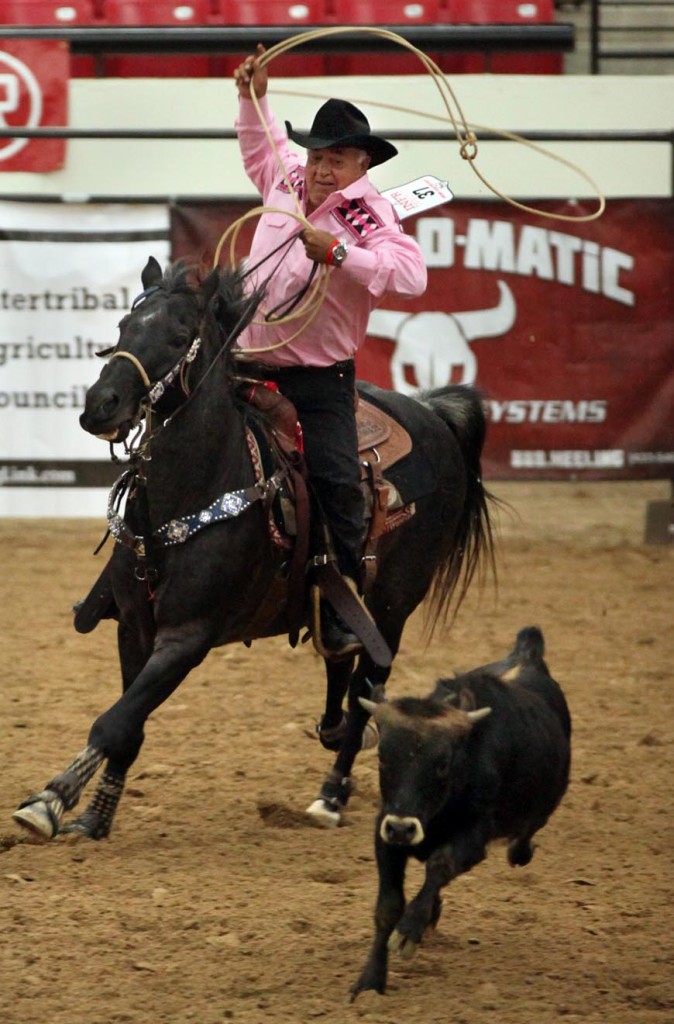 “It’s custom for Native people to ride. It’s a natural ability we’ve developed over centuries right where we live and work,” said Willie Johns, a community outreach specialist in Brighton and an INFR commissioner.

Native life in rural America – steeped in family tradition, culture and daily work on farms and ranches – led 288 contestants to the South Point Arena and Equestrian Center, one of the largest indoor rodeo arenas in the U.S.

“In South Florida, we started raising and training Spanish horses generations ago. The cattle industry, plus raising sheep and goats, is the way our Native kids grow up,” said Johns, a former six-time INFR qualifier.

Spectators filled the 4,600-seat area. In all, 73 Tribes, the largest contingent from the Navajo Nation, were represented in livestock suppliers and contestants.

“When we say all-Indian, we mean it,” Hooper said.

Contestants earned spots by racking up points in multiple regional rodeo events and national rodeo tours over the last year. More than a dozen cowboys and cowgirls from the Eastern Indian Rodeo Association (EIRA) packed up horses and saddles and headed west after earning leader board scores at rodeos in Immokalee, Big Cypress and Brighton.

“This is our day, Las Vegas,” called the arena announcer to a packed house of Stetson hats, Lucchese boots and Wrangler jeans-wearing fans. “And we have a lot of angry hamburger in the house,” he said referring to rough stock.

Nelson scored 150 in two rides for fourth place overall. It was a good showing after fracturing his leg in a September competition, then riding only three times before INFR.

“I’ll be back next year. I’ll practice more and be ready to take it all,” he said.

Johns earned no score after being tossed before the buzzer. Bruised Head landed in 13th place though he scored in the top three spots through the go-rounds and finished fastest in the final round.

Bruised Head jumped the barrier before the calf left the gate, penalizing him with an additional 10 seconds that stole a higher standing.

Team ropers Josh Jumper and Preston Williams, of Big Cypress, and Justin Gopher and Hilliard Gopher, of Brighton, were put out in the third round, while Dayne Johns, of Brighton, was shut out of the steer wrestling category at his second round.

Spectators cheered every contestant with every elimination.

“We have top qualifiers here who prove they can do things. In rodeo, it doesn’t work out every day, but every day is a new day,” declared the announcer.

Norman Johns put on a good show with near perfect breakaway roping skills in the senior category but was shut out also in round three when his lasso missed the steer.

Among the male junior contestants, breakaway ropers Jacob Parks and Jaylen Baker were cut short with no scores in the second round. Baker also made it to round two for junior bull rider but did not advance.

“For all of the contestants, it’s an accomplishment just to get (to INFR),” said Stacy Parks, who traveled from Dania Beach to watch her son Jacob compete. “We’re proud of them all and next year we’ll be back to kick butt.”