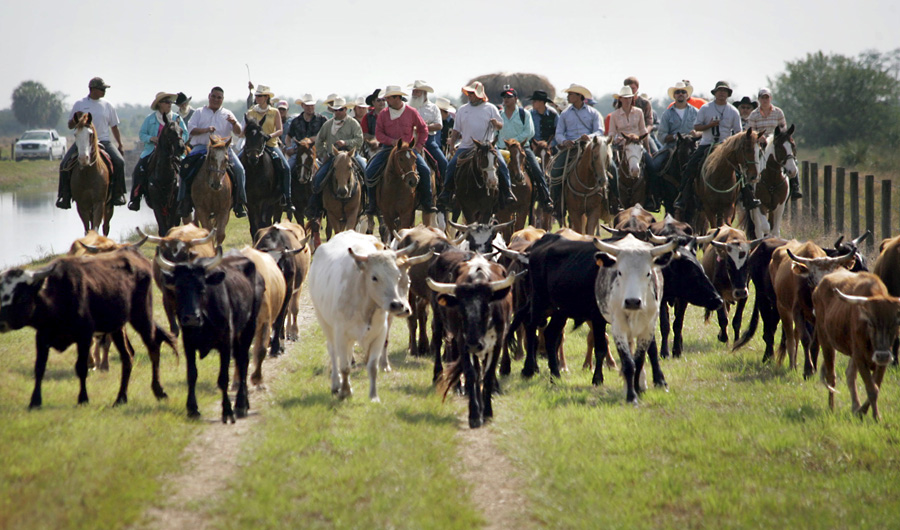 BIG CYPRESS — Monica Chavez was still a filly when she saddled up for the first time to help rustle dozens of 1,000-pound beefy beasts during a cattle drive on the Big Cypress Reservation.

“Every year it’s fun and exciting,” she said. “It’s always good to go down memory lane.”

Reliving four centuries of local Native American cattle history is the point of the drive, said Moses Jumper Jr., who co-founded the event in 1997 with Paul Bowers Sr. and Richard Bowers Jr. with support from then-Chairman Mitchell Cypress.

“The past cattlemen and women not here today are looking down on us,” Jumper said. “We do this to honor them and to remind the community that we’re more than casinos and alligator wrestling.”

Tribal ancestors had bartered cattle with Spaniards as far back as the 1600s.

Every necessary job for a historic cattle drive was held by nearly 100 cowboys and cowgirls for the 7-mile journey through what Jumper called, “The heart of Seminole cattle land.” Groups of five or more took point and swing positions, clusters of a half dozen made up the flank, while scores more rode the back drag as if in a grand parade.

Two swamp buggies from Billie Swamp Safari, a carriage pulled by white horses and a stream of rugged ATVs rounded out the cavalcade.

In the old days, before streets, fences and long before the Tribe was recognized by the U.S. government in 1957, cattle owned by area Native Americans roamed free. It could take two months to round up the herd and another three days to count, tag and care for them, said Cypress, nephew of Junior Cypress.

“I remember the open range. We ran Brahman during the times when screw worms were eating the heck out of the cattle. We’d be the youngest ones out there – me and James Billie and Joe Frank – doctoring up the cows and calves,” Cypress said. “Some of the young ones these days will never know how hard those days were.”

Perseverance paid off. Today, the Tribe ranks among the top three beef producers in Florida and the top 10 in the U.S.

Leading the herd of 30 steer was Benny Hernandez, the former director of the Junior Cypress Rodeo Arena. The honor of trail boss went to the family of Albert Billie. Born around Jan. 4, 1900, Billie was one of the first Seminole cattle entrepreneurs. He died on Feb. 26, 1993.

Billie’s granddaughter Mary Jene Coppedge Koenes and grandson Gene Coppedge rode in a buggy at the head of the pack along the fringes of pastures, passed canals and atop roadside knolls. Koenes recalled Billie’s hardworking life. He was a “horseless cowboy” who would set out on foot every morning “at dark 30” to work his herd in a pasture 4 miles from home.

“He had a cracker sack he made into a tool bag. Inside he had all the tools he’d need for the day: a hammer, fence pliers, rope and lunch,” Koenes said. “He would be so proud to know the cattle program continued – four generations later.”

Jumper recited one of his many poems that pay tribute to Seminole cattle history and culture.

He spoke of men who welcomed the night after a long day of hard labor, lying under a tin shelter, listening to the babble of a nearby creek and the buckling of old leather Army saddles. He dismissed Hollywood cowboys with names like Roy, Gene and Wayne. Instead, he invoked Morgan and Dixie Smith, Charlie Micco, Naha Tiger and other Seminole cowboys.

“Those were real men from the tip of their boots to the top of their hats,” Jumper said.

The $50 per rider fee paid for a hearty breakfast, a commemorative kerchief, lunch, a barbecue dinner, an alligator show and a sanctioned Eastern Indian Rodeo Association rodeo. Participation was about half Tribal and half non-Tribal.

Efrain Gill, of the Miami Redlands, rode the drive on horseback with his wife, Elizabeth, and 16 fellow equestrians. The group has participated in trail rides for several years but did not know anything about Seminole history or that Big Cypress even existed.

“We had no idea that it would be the best ride we’ve ever done,” Gill said. “It’s organized, the people are really nice and it’s great to be able to ride through such history.”

Ruben Ruiz-Velasco, of Miami, who owns a 3,000-acre cattle ranch in Mexico, said he never experienced a drive with more cowboys than cattle.

“Usually we have one cowboy for every 30 cows. Today is very relaxing,” he said.

For Big Cypress cowgirl and rodeo competitor Aize Henry, riding the swing position in the Junior Cypress Cattle Drive on her home reservation was about sharing tradition and culture with the larger community.

“Cattle has always been in my family and I’ve always been a part of the drive,” she said. “It’s my way of life.”