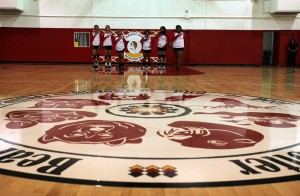 For months during the “facelift,” the team and the girls’ varsity volleyball team had been forced to play “home” games in rival school courts.

The new stress-relieving floor, similar to those of professional NBA courts,  is constructed with a moisture barrier, a thick layer of resilient pad, two layers of hardwood subfloor and a maple parquet top layer. The “give” of the floor absorbs shock, reduces stress on joints and decreases the potential for injury.