Skip to content
You are here
Home > Education > Brighton, Big Cypress students pray at the pole 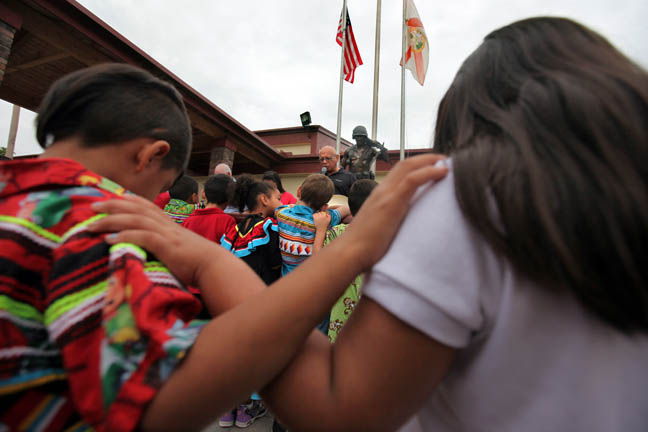 Decades have passed since 1990 when a handful of Texas teens gathered under the cover of night to pray at school flagpoles in spite of laws that prohibited organized prayer in the classroom.

This year, more than 3 million students worldwide met Sept. 24 for the national See You at the Pole, outside schools and before classes began, under flags that waved freedom, courage and strength. Included were dozens of students from Ahfachkee School in Big Cypress and Pemayetv Emahakv Charter School in Brighton.

“Every one of us knows there is a God, a Creator, a Son who loves us and sacrificed for us and that we are free to honor Him,” said Pastor Salaw Hummingbird, of Big Cypress First Baptist Church, during the Ahfachkee student assembly held at the Herman L. Osceola Gymnasium flagpole memorial.

At PECS, about 60 students and staff mustered in a breezeway where the school’s Fellowship of Christian Athletes club sponsors Chris Goodwin and Diana Harrison led prayer and songs with Luke Enfinger, a music leader from More 2 Life Church in Okeechobee.

There, sixth-grader Caylie Huff read a poem she wrote for the occasion that included the line, “The Lord is first in my life, my family second and some things in my life are going to be hectic but it will all be OK because Jesus Christ will lead the way.”

The United States Supreme Court banned prayer in public schools through two rulings, one in 1962 and another in 1963. However, according to the United States Department of Education website, “students may organize prayer groups, religious clubs and ‘see you at the pole’ gatherings before school to the same extent that students are permitted to organize other non-curricular student activities groups.”

Ahfachkee and PECS students chose to observe See You at the Pole, though the schools are on Tribal land and sovereign by most standards.

“It is for that freedom that we are here. That is what we stand for,” Hummingbird said.

Hernandez compared the event to the biblical story of David and Goliath in which David, a mere youth, puts his faith in God to defeat the seemingly invincible giant Goliath.

“The theme this year is, ‘Never Stop Praying,’” Hernandez said. “We have many reasons to pray and we pray to win against our hugest giants.”

Children were urged to pray daily for each other and their families, schools and Tribal leaders.

“We are all here because we are the answer to someone’s prayer,” Rep. Frank said. “Whether you call Him Jehovah, the Creator, God, Allah or Yahweh, don’t be afraid to talk to Him.”