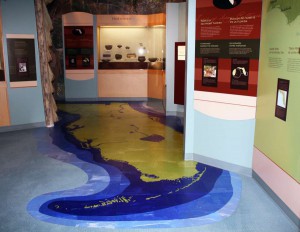 TALLAHASSEE — Phase One of the new Forever Changed: La Florida, 1513–1821 exhibit opened at the Museum of Florida History last month, highlighting an important, but often overlooked era in state history.

The exhibit aims to show that when Europeans came ashore almost 500 years ago, Florida was already home to large and diverse groups of Native people, such as the Calusa, Apalachee, Timucua and other ancestors of today’s Seminole Indians.

Other focuses of the large exhibit include an overview of Spanish exploration and the interactions between European, African and Indian cultures that occurred in Florida in 1513 and later. Next year will mark the 500th anniversary of explorer Juan Ponce de Leon’s visit to the land he named La Florida.

Information about the lifestyles and material culture of the Native people is presented in the exhibit’s “Land of Many Cultures” section, featuring more than 50 original American Indian artifacts from approximately 1000-1500 A.D. Additionally, there are several reproduction objects, such as copper repoussé breastplates and carved wooden masks, that interpret the rich culture of Florida’s first people and represent all regions of Florida.

The long-distance trade that existed 800-1,000 years ago is highlighted by non-local trade materials, such as greenstone and copper. Visitors will see a variety of ceramic vessels, as well as shell, bone and stone objects.

Jeana Brunson, director of the Museum of Florida History, made a surprise visit to the Tampa Seminole Easter party at the Lakeland property on April 6. While talking with Tribal Cultural director Herbert Jim about the traveling Seminole elder trips he helps coordinate, Brunson extended a personal invitation to Seminoles to visit Phase One of the Museum’s brand new La Florida exhibit.

“We would be honored to have Seminole people see this exhibit,” said Brunson, a 25-year Museum staffer who has been director for 10 years. “We would love to know what you think about it.”

In addition to text panels, maps and photographs, there are a number of elements with which visitors can interact. A palm-fiber net, made using the same techniques the Key Marco Indians used, is on display, and visitors can also try their hands at weaving. A three-dimensional diorama shows what a farming village in north Florida may have looked like more than 500 years ago. Two computer stations provide more information as well as a fun quiz.

The main visual element in the exhibit is an 18-foot-high thatched structure representing a Timucua family’s dwelling. The Timucua people, composed of dozens of different Tribes who all spoke dialects of the Timucua language, lived in northeast Florida and along the St. Johns River. Visitors can enter the dwelling, listen to a descriptive audio program and view a mural inside.

In the Meeting of the Cultures section, there is a full-size figure representing Chief Saturiwa, a Timucua-speaking leader who lived near present-day Jacksonville in the 1560s. A display of a reproduction bow and arrow, sharks teeth club and atlatls are additional highlights.

Planning is underway for Phase Two of the exhibit, which will highlight the years from 1565 to 1821. The Museum hopes to have the entire exhibit completed by the end of 2013.

The Museum of Florida History offers tours and educational programs to school groups throughout the year. For more information, visit www.museumoffloridahistory.com.