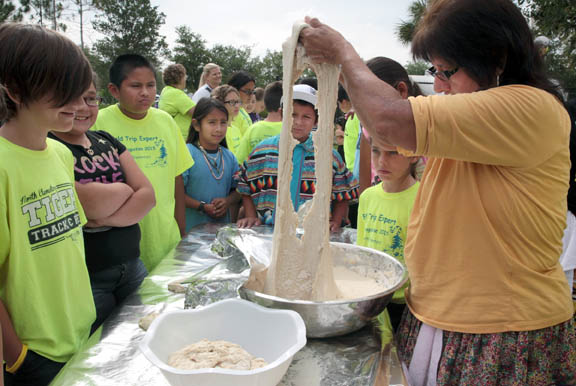 BRIGHTON — Florida history recently came to life for Pemayetv Emahakv Charter School and Okeechobee’s North Elementary School fourth-graders as they reenacted the era of the book “A Land Remembered” and saw the past through each other’s eyes.

The 1984 book, by Patrick D. Smith, tells the tale of white Florida settlers in the mid-19th century and their encounters with Seminoles. The book explores the symbiotic nature of their relationship.

Dubbed A Land Remembered Day, the event served as a culture exchange between the two groups of students. One hundred Okeechobee students spent June 2 at PECS, where they made and ate frybread, tasted sofkee, created traditional beaded necklaces and learned about the Seminole Wars and Seminole legends to understand Seminole culture and history. PECS students had previously tasted the cowboy lifestyle during a May 26 trip to Williamson Cattle Ranch in Okeechobee.

“The book has some really good things related to Florida’s history,” said PECS teacher Joy Prescott, who helped organize the PECS event. “The book has two main groups, the MacIveys and the Seminole Indians. One group without the other wouldn’t have worked.”

In the book, which covers the period from 1858-1968, the Seminoles taught the MacIveys how to graze cattle and fatten them for market. PECS mimicked the mutually beneficial relationship at the school’s culture camp where culture staff taught Okeechobee children how to make frybread. In culture teacher Jade Osceola’s classroom, they learned about the Seminoles’ place in Florida from the Tribe’s perspective.

“Native Americans always say, ‘Keep your hearts in the past, your head in the present and one foot in the future,’” Osceola said. “That’s what we teach here, to be aware of history. You need to know where you come from to know who you are.”

Osceola explained that the Seminoles derived from other Tribes, which were named the Creek people by Europeans because they lived by creeks. After a civil war between Creek factions in 1814, about 3,000 fled south to Florida. The Spaniards called them the Cimarron, or runaway slaves, which evolved into the name Seminole.

She told students that the Seminole Wars against the U.S. Army – from 1816-19, 1835-42 and 1855-58 – began when slave owners tried to retrieve their runaway slaves, who found safe harbor with the Tribe. The U.S. also wanted the land that the Seminoles called home. With the passage of the Indian Removal Act of 1830, Tribes in the Southeast were moved to Oklahoma. The Seminoles resisted.

“We are all descended from the 300 who didn’t go to Oklahoma,” Osceola said.

“Before they came to Florida, Indians wore buckskin clothing,” Prescott said. “When they got here, they traded the skins for fabric. It was very common to see men in long shirts to their knees with a belt.”

In the early 1900s, sewing machines were introduced to the Tribe and the tradition of patchwork began. Okeechobee students learned the patchwork they saw PECS students wearing was all handmade in the same tradition.

“I wanted them to learn about our Tribe and that the Indian Removal Act was bad, but they fought for their land,” said PECS student Jarret Huff.

Okeechobee students said they learned a lot and that the history, Creek language and frybread were among the highlights of the day.

While at Williamson Cattle Ranch in Okeechobee on May 26, PECS fourth-graders learned the perspective of the cowboys’ lifestyle in the book. They ate pole beans and dried beef, used a cow whip and branding iron, and learned to square dance, Prescott said.