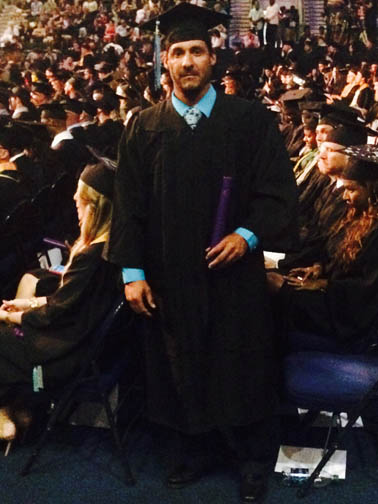 For example, the newly minted graduate of Florida SouthWestern State College in Fort Myers has shown his children they, too, can achieve great things.

“I can tell my kids I graduated college,” he said. “It was stressful, but once I finished, it was an accomplishment. Now that I can say it’s done and over with, is awesome.”

Wilcox hadn’t always planned to attend college but a 2011 boating accident, in which he nearly lost a leg, changed his life. He worked as a hunting guide at the Big Cypress Wildlife Department since 2003 and was promoted to director in 2010.

“I was always one of those workers who liked to sweat,” Wilcox said. “I like being outdoors.”

Faced with the prospect of working indoors for the rest of his life because of his injuries, Wilcox made the decision to educate himself.

“If I did have to work in an office, I didn’t just want to answer phones,” he said.

He enrolled as a full time student in 2012 shortly after landing a job in the Tribe’s Executive Operations Office, just a few months after the accident.

His bachelor’s degree in supervision and management suits his job as a program supervisor. He supervises businesses at Big Cypress Reservation, including Billie Swamp Safari, the RV Resort and Campground, rodeo, Rock Pit and Wildlife. His aims to continue working for the Tribe and learn everything he can.

His degree has already positively impacted his job.

While studying ethics, leadership and accounting at school, he saw examples of them at work and implemented what he learned right away.

“My education allowed me to be more confident in my job as I try to do my best for my Tribe,” Wilcox said. “As a Tribal member, you have two pressures on you; you want to do your job to the fullest because it is for your family and you want to be productive and effective.”

His biggest challenge during college was commuting to and from Fort Myers – more than 60 miles each way – for class after a long day at work in Big Cypress. While keeping up with his studies, Wilcox learned to juggle work and family time, including coaching his daughter’s softball team and competing in rodeos as a team roper. He found a way to make it all work and made the A/B honor roll every semester.

Wilcox said his family was the motivation and inspiration for his success.

“I just wanted to be able to provide for my family,” said Wilcox, who lives in Big Cypress with his wife, Crystal, daughter Jaylee, 9, stepson Jacob Cotton, 17, and foster daughter, Illiana Robbins, 10.

Wilcox said he is grateful for the Tribe giving him the opportunity to pursue higher education.

“I’d like to give back and speak to the younger generation and let them know they can go to school and do the same thing,” he said. “I’d like to encourage them to get an education and then come back to work for the Tribe.”