The addition of firefighter/paramedics Marvin Ayers, Alain Borges, Enrique Ferreira, Kevin Herrero, Machir Marsh and William Neunzig was celebrated with a graduation and employee recognition ceremony at the auditorium in Tribal Headquarters.

The importance of family – at work and at home – was stressed throughout the evening by speakers, including Fire Chief Donald DiPetrillo, Big Cypress Board Rep. Joe Frank and Executive Director of Public Safety/Police Chief William Latchford.

“Once you join the Tribe, you are part of one big family,” DiPetrillo told the graduates. “The Tribal members count on us as a family and as co-workers to support them as much as we count on them to help us.”

Those sentiments were echoed by Rep. Frank.

“… I think it’s important to thank the families. The individuals that are entering this profession and that have been in it need strong family support,” said Rep. Frank, who ran the Tribe’s wildlands unit for several years.

As one of the newcomers, Neunzig said he’s looking forward to being part of Public Safety’s family.

“The family atmosphere will probably be the best thing,” Neunzig said as he held his 9-month-old daughter, Alyssa, after the ceremony.

For fellow graduate Borges, firefighting is a new experience in his immediate family. The son of parents from Cuba, Borges grew up in Miami and said he is eager to start his career.

“First generation firefighter. I’m very proud to be here. I love everything about it. I’m willing to protect and serve everybody,” Borges, 26, who also considered entering police before opting to take the fire route. “I was indecisive between fire and police at first, but definitely fire was the right gear for me.”

“The six of us are close. We have a great bond and we have our own family amongst each other as well,” he said.

Ayers, part of that family, comes to the Tribe with paid and volunteer experience under his belt having served on fire rescue departments in DeSoto County and Lauderdale-By-The Sea.

“You’ve got to love what you do, and I absolutely love what I do,” he said.

After the speeches and a rocking video tribute to Fire Rescue set to ACDC’s “Thunderstruck,” firefighters who earned promotions were recognized on stage before Class 16-01 was called up to receive their badges.

“It’s a big family,” Borges said. “It doesn’t matter what fire department you are from, if you are a firefighter, you’re family. I’m honored to be part of this family.” 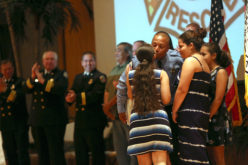 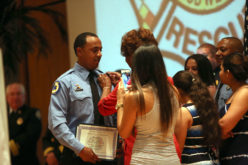 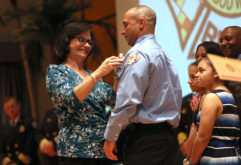 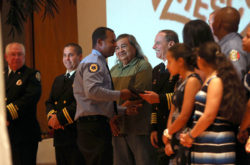 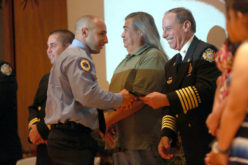 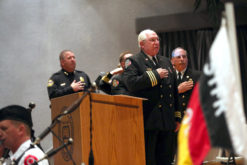 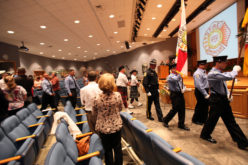 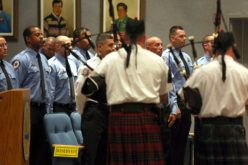