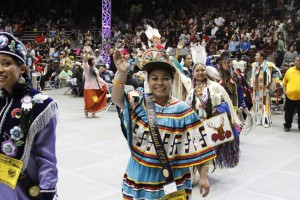 Dancers dressed in traditional garb adorned with colorful beads and flowing feathers kicked off the event with the grand entry at the University of New Mexico Arena, commonly referred to as The Pit. Along with competitive dancing, attendees experienced native food vendors, arts and crafts, live music and the Miss Indian World Pageant.

Miss Florida Seminole Alexis Aguilar traveled from the Immokalee Reservation to attend the three-day event and represented the Seminole Tribe at the pageant, in which 16 contestants from North America and Canada competed.

Unlike traditional beauty pageants, the Miss Indian World Pageant focuses on the knowledge each contestant has about her own culture. The winning contestant serves as a cultural goodwill ambassador for all indigenous people, helping achieve the mission of the Gathering of Nations. Founded in 1983, the powwow promotes Native American culture and tradition and dispels stereotypes created about indigenous people.

With a smaller group of contestants this year, Aguilar met all the young women vying for the title. “Getting to meet the other girls and making friends with them” served as the highlight of the event, she said.

Showing her support for Aguilar was Jr. Miss Florida Seminole Brianna Nunez, who stood out in her patchwork skirt, sheer cape and crown among the eagle feathers of the other dancers.

The Miss Indian World title went to Kansas Begaye, of the Diné (Navajo) Nation, who said she was able to secure the title for her Tribe through lots of practice. It was her second attempt at the crown. And even though Aguilar did not win, she came away with knowledge of the other indigenous Tribes.