ALBUQUERQUE, N.M. — Miss Florida Seminole Destiny Nunez trained since November for the Miss Indian World Pageant and last month, she and 23 other contestants from throughout Indian Country vied for the crown. Although she didn’t win the title, Nunez emerged as a winner in other ways.

“I’m really proud of myself,” she said. “Before this year, I would have never put myself in this situation.”

A naturally shy person, Nunez entered the Miss Florida Seminole Princess Pageant last summer to help her overcome anxiety. The strategy worked. Nunez is now comfortable speaking to people she doesn’t know and in front of a crowd.

The Miss Indian World Pageant, part of the Gathering of Nations April 28-30, required contestants to present a cultural talent, speak extemporaneously in front of a crowd on the popular Stage 49 venue and dance competitively for the judges.

The pageant began April 28 with the talent presentation in the Albuquerque Convention Center. Contestants showed expertise in their Tribe’s culture by telling stories, demonstrating dance moves, sharing historical facts and explaining the significance of traditional garb. Some girls were comfortable on stage; others showed their nerves.

“These ladies are all awesome,” said Miss Indian World committee member Beulah Sunrise. “You never know how it will turn out.”

Nunez was confident as she told a story of survival and dignity from the time of the Seminole wars. She said a war party went out of the village and didn’t return, leaving a boy to wait for his father. Finally, the boy ventured out to look for him and found his father burying the victims of a massacre in a nearby village. Despite the threat of more soldiers coming to destroy the Seminole people, the man honored the dead and left a lasting impression on his son.

All the contestants exhibited pride in their heritage.

“I may not be rich with money but I am wealthy with my language, history and culture,” said Edith Starr, San Carlos Apache, who spoke while showing her expertise at a hoop dance.

Junior Miss Florida Seminole Skyla Osceola attended Gathering of Nations to walk in the Grand Entries with royalty from other Tribes and to get a feel for the pageant in case she decides to compete next year. According to Sunrise, contestants do not have to be Tribal royalty but many Tribes send their princesses to represent them.

“If I ever do compete, I’ll know what to expect and have an advantage,” Osceola said. “I’m also looking forward to the Grand Entries.”

An accomplished basketball player, Osceola competed in the Princess Pageant last summer because of a knee injury which required surgery. Being royalty has been a new and exciting adventure for her.

“Playing sports and being a princess are so different,” she said. “As Junior Miss, I have to make appearances and be ready to speak. When I play basketball, I just play. Both are fun and I love doing them both equally. It’s been a great experience.”

Next on the Miss Indian World contestants’ busy schedule was the impromptu speaking event on Stage 49. Although the day was cold and blustery with rain and some hail, the contestants spoke confidently from the heart. Nunez described the best thing about the Seminole Tribe.

“We are unconquered and never gave up,” she said. “That is why I’m proud to be a Seminole.”

The Miss Indian World contestants had an honored place in all four of the Grand Entries during the event. They came out smiling and waving right behind the head dancers and before the rest of the 3,000 participants filled “The Pit” arena floor at the University of New Mexico.

Prior to the dance competition April 29, announcer Sunrise explained to the judges that the contest was meant to be an interpretive dance and could be in typical pow-wow or their Tribal styles.

“Judge them on the expressiveness of the dance,” she said.

The 23 hopefuls demonstrated their skills in a variety of dances such as shawl, jingle and traditional styles. Dressed in a time-honored patchwork skirt and cape, Nunez did a quietly dignified stomp dance.

Danielle Ta’Sheena Finn, Standing Rock Sioux, from Porcupine, North Dakota, won the title to rousing applause from the other contenders. They all took a victory lap around the floor, while waving to the crowd.

“All the girls are really nice and everyone is united,” Nunez said. “It’s been empowering to be around these strong Native women.” 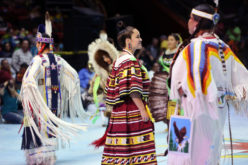 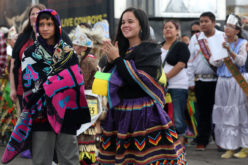 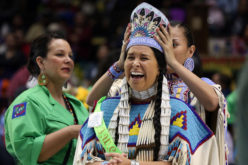