FORT MYERS — About 50 girls from Seminole reservations took over the Alico Arena at Florida Gulf Coast University on June 9 for a high level volleyball clinic led by FGCU’s coach.

The girls made the “Nest” – the arena’s nickname – their own for the day as they polished and practiced skills to make their games stronger. FGCU head coach Matt Botsford led them through a litany of drills including passing, setting, serving and hitting.

“They have a good foundation. I want to refine the concepts and ideas that will help them in the sport. I’m impressed that they’ve been taught all the right things; they’re doing a really good job,” said Botsford, whose FGCU team reached the ASUN Conference championship game last season,

It was the second year of the onsite FGCU volleyball program, but this year the Brighton Reservation invited the Chobee Volleyball Academy to participate with them. A few Tribal girls play for the organization, which has seven teams. The 14 and under team, which includes Karey Gopher and Elle Thomas, recently won the AAU South Florida Super Regional Tournament and qualified for the AAU National Volleyball Tournament.

“Last year the clinic really helped them,” said Kelly Smiley, Brighton recreation office coordinator. “It refreshed their skills and sharpened them up.”

“We just love having the kids from the Tribe here,” Perchan said. “But there is a bigger part of this. Sports are meant to help kids finish high school and look at college or trade school. If not FGCU, then make it some other school.”

The university also offers summer STEM (science, technology, engineering and math) and dual enrollment programs for Native American students. Perchan said the plan is to make it a five-week residential program next summer.

On the court, the volleyball action was intense as the girls went through the drills.

“Make your hands cradle the ball, shape them like a ball,” Botsford told the girls as he taught them how to set properly. “Get your forehead behind the ball.”

Ball-handling “rapids,” where three girls quickly set and then passed the ball to each other, were next.

“Everybody wants to hit, but hitting is irrelevant if you can’t pass and set,” Botsford said. “That’s why we do this first and then get into hitting. The highest value to a team is these two skills.”

Footwork and spiking the ball go hand in hand, so to speak. The coach explained that a three-step approach to the net and being able to rotate to gain momentum increases a player’s attack velocity.

“Use your arms to jump and create momentum and you will always jump higher,” Botsford said. “Undersized attackers can be really effective by perfecting these techniques.”

During the serving drill, the players took turns hitting it over the net. Coach Botsford told them to avoid putting spin on the ball as they served.

He told the group that most young players toss the ball too high or too far or to the opposite shoulder. The goal is to have as little motion as possible.

The players worked hard on their moves and appreciated the tips.

“It’s awesome,” Canaan Jumper said. “I learned the importance of the mechanics of everything.”

“It was amazing and it will help us accomplish more,” Lexi Thomas said.

“They really put us to work,” added Akeelah Mitchell.

At the end of the day, Botsford reiterated the best advice he could give.

“Try to simplify the skill itself,” he said. “Get rid of extra movements that don’t add to the skill.”

The young players will surely take those words and the day’s workout to heart.

“I feel like I’ll be more prepared and play better when practice starts in July,” said Jordan Osceola, who has been playing on the Sagemont School team for three years. 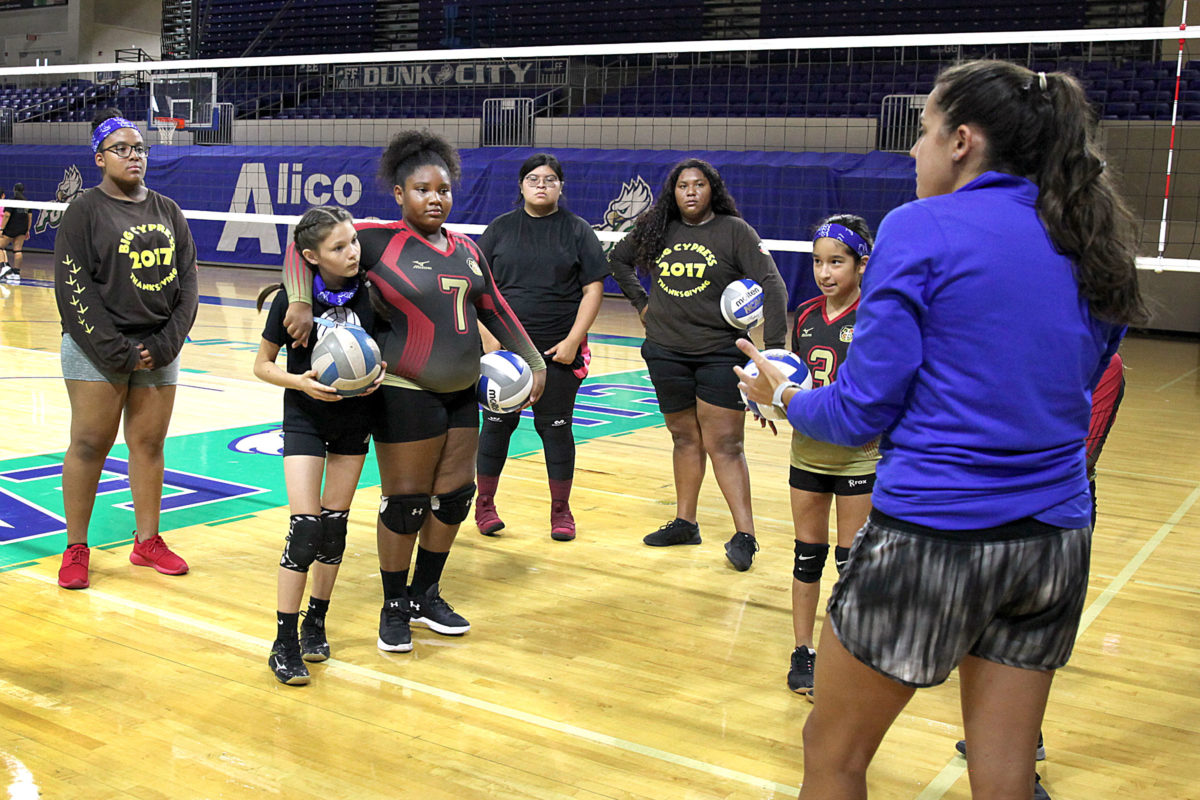 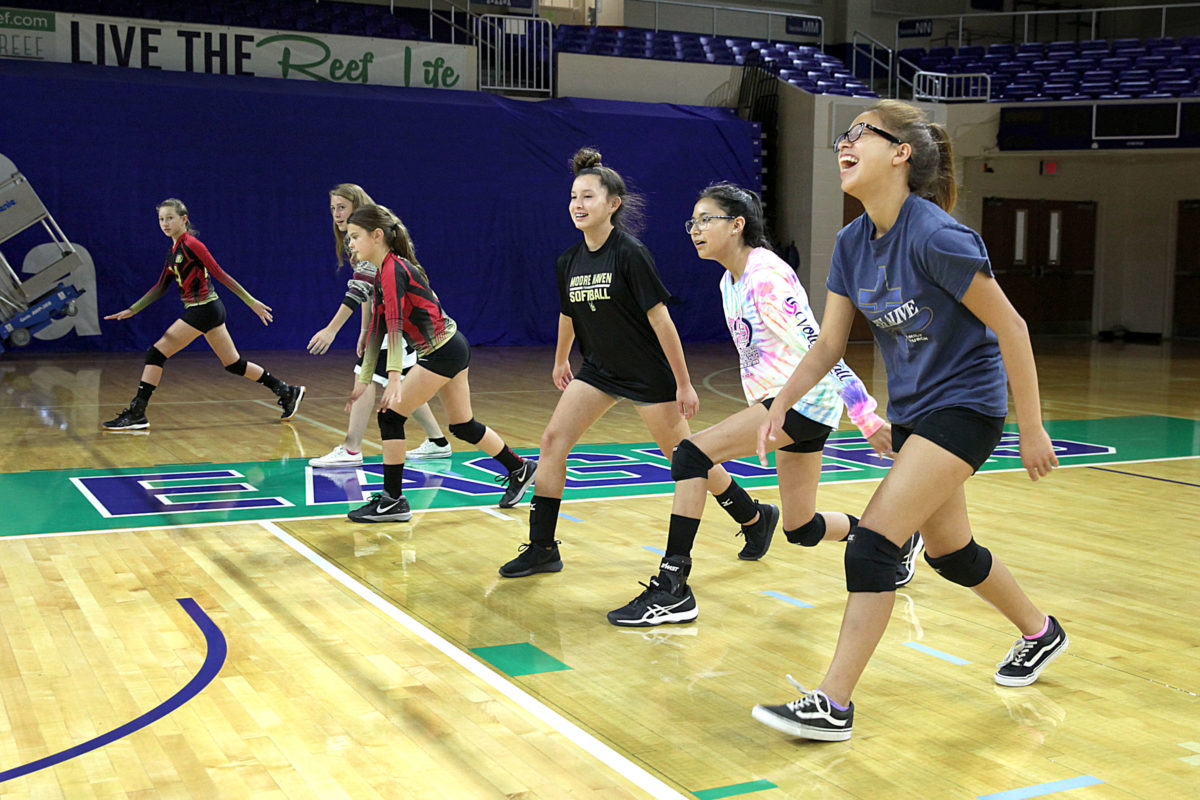 The footwork drill brought out the giggles for some of these girls, who attended the volleyball clinic to improve their skills. (Beverly Bidney photo) 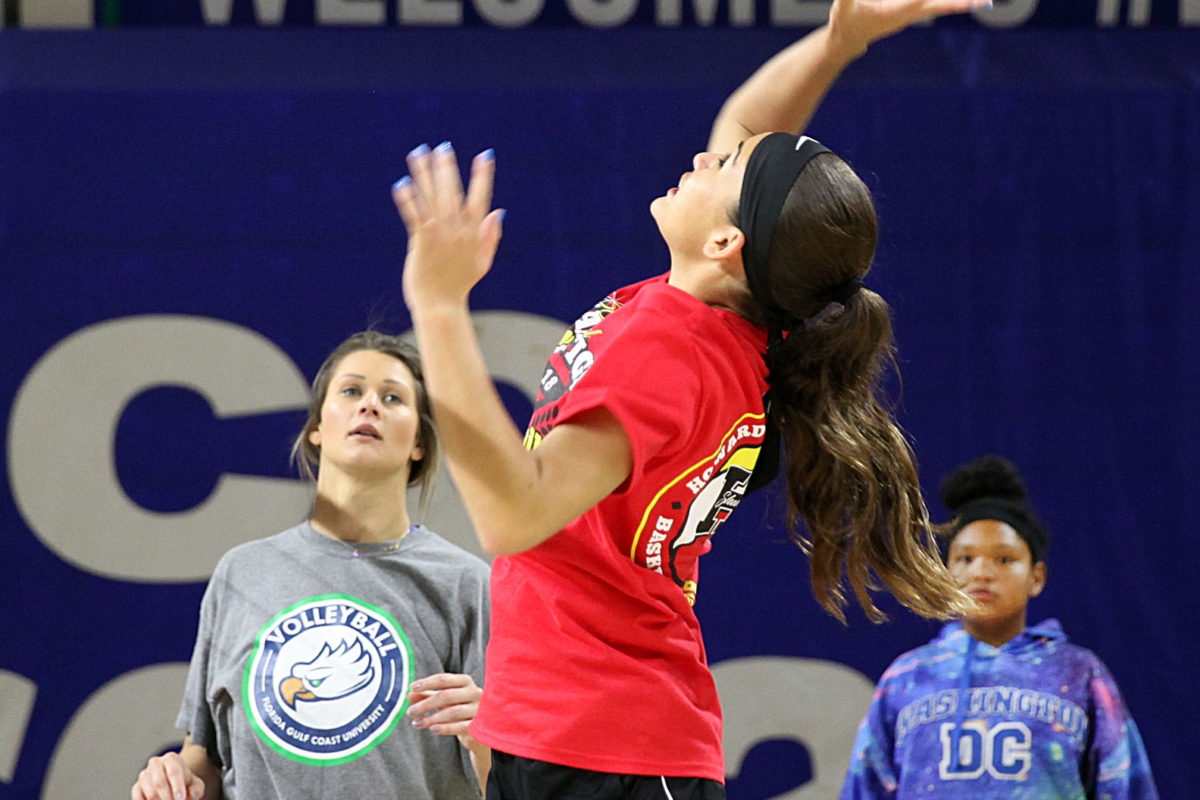 Carlise Bermudez gets ready to spike the ball over the net during a drill at the FGCU volleyball clinic. (Beverly Bidney photo) 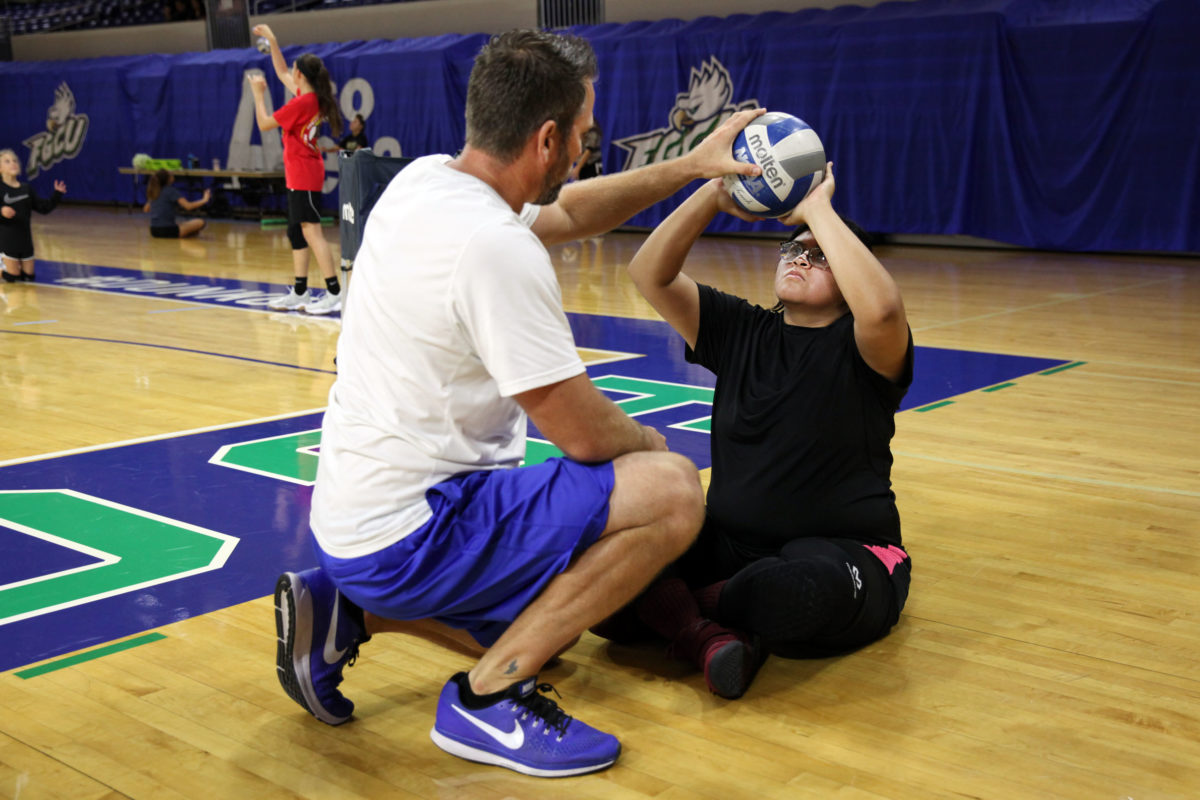 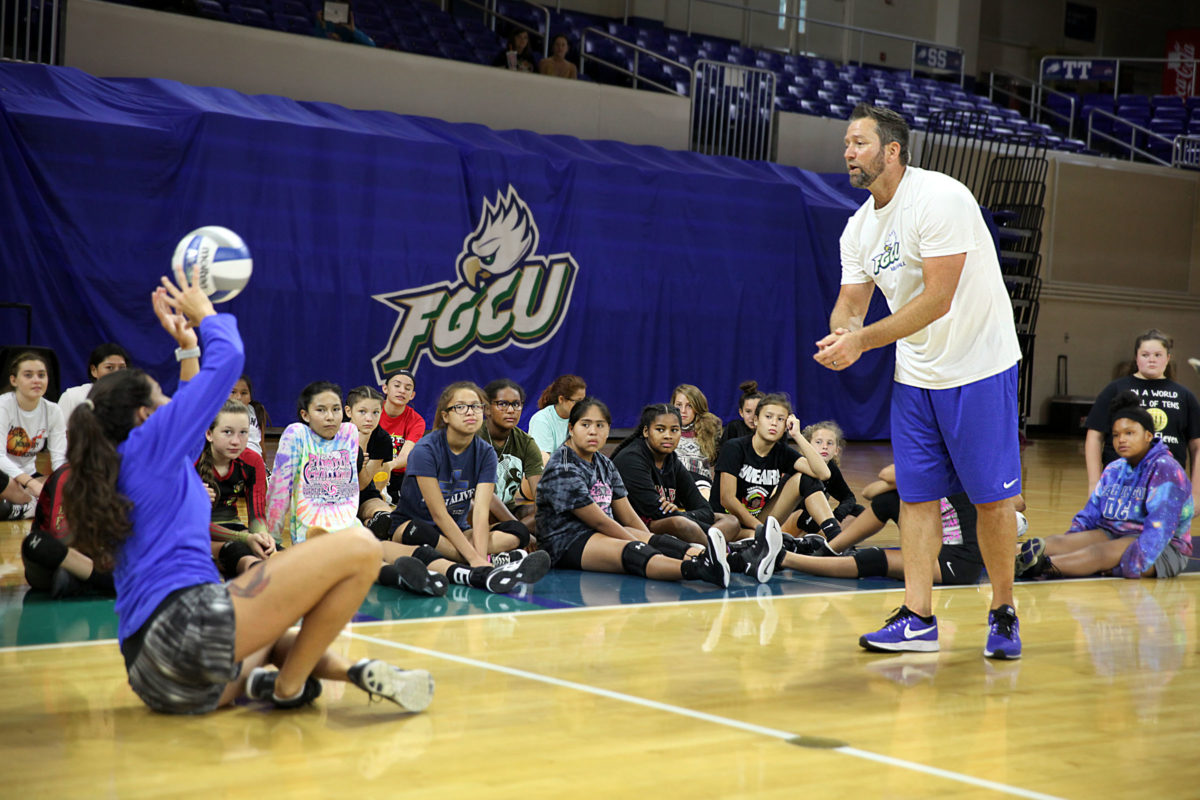 FGCU volleyball coach Matt Botsford shows the group how to line up behind the ball to return it, even if it means leaning a lot. (Beverly Bidney photo) 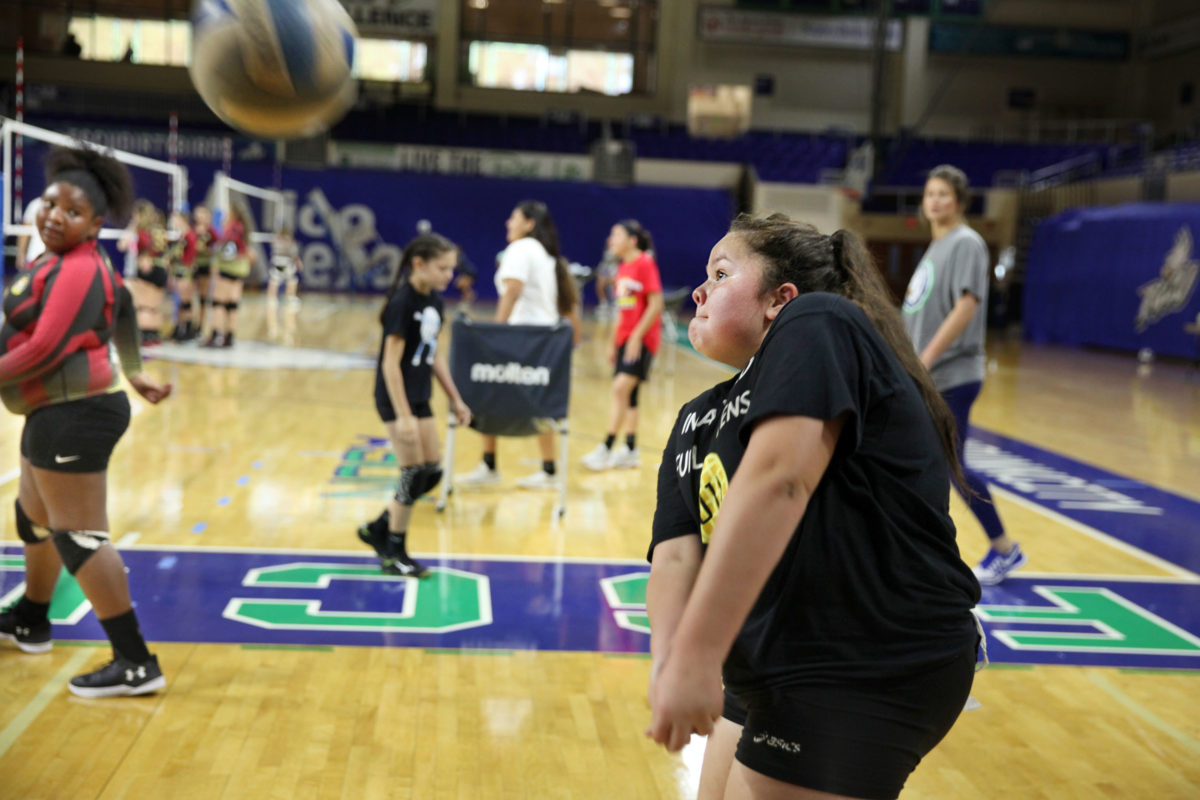 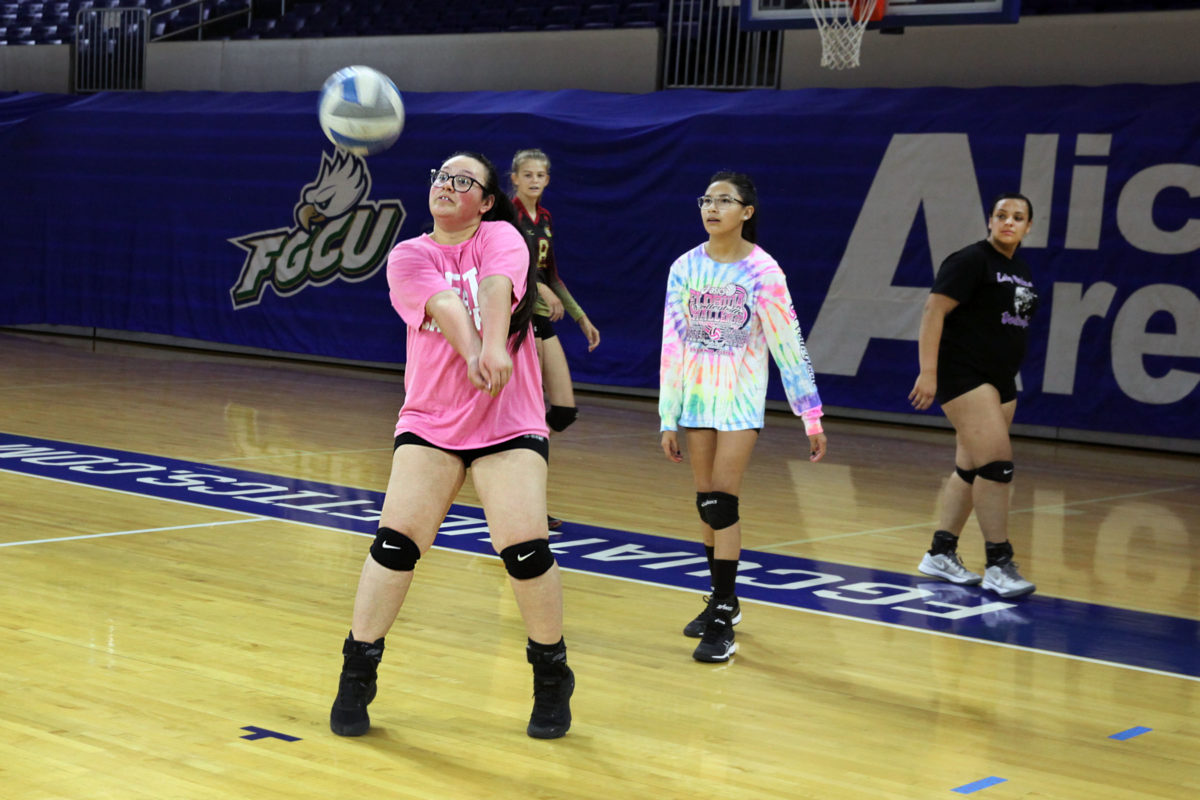 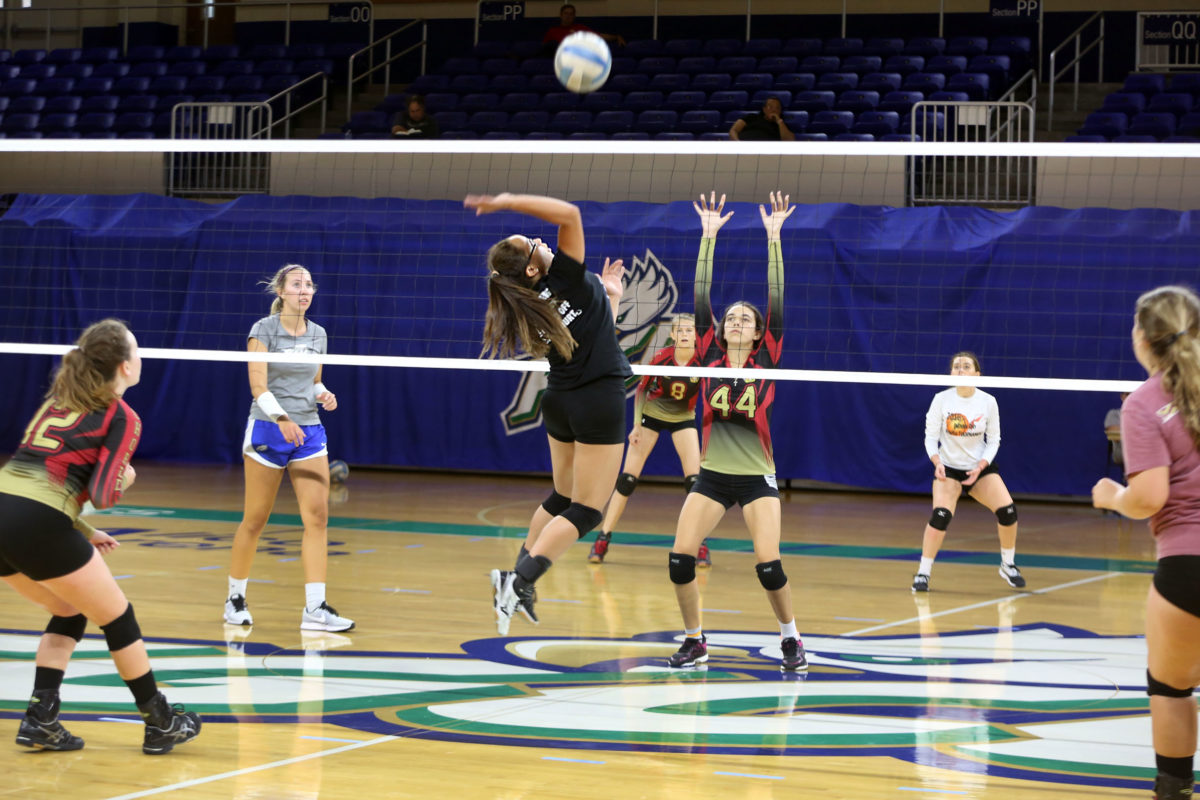 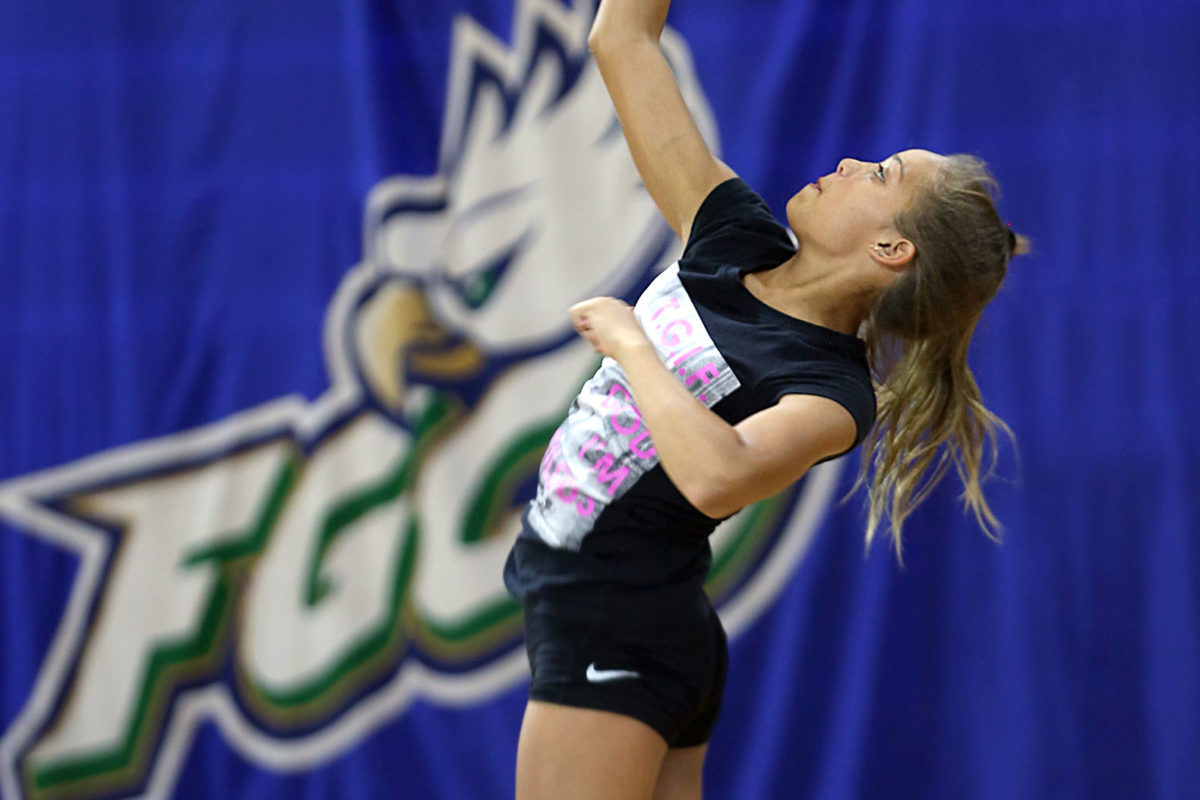 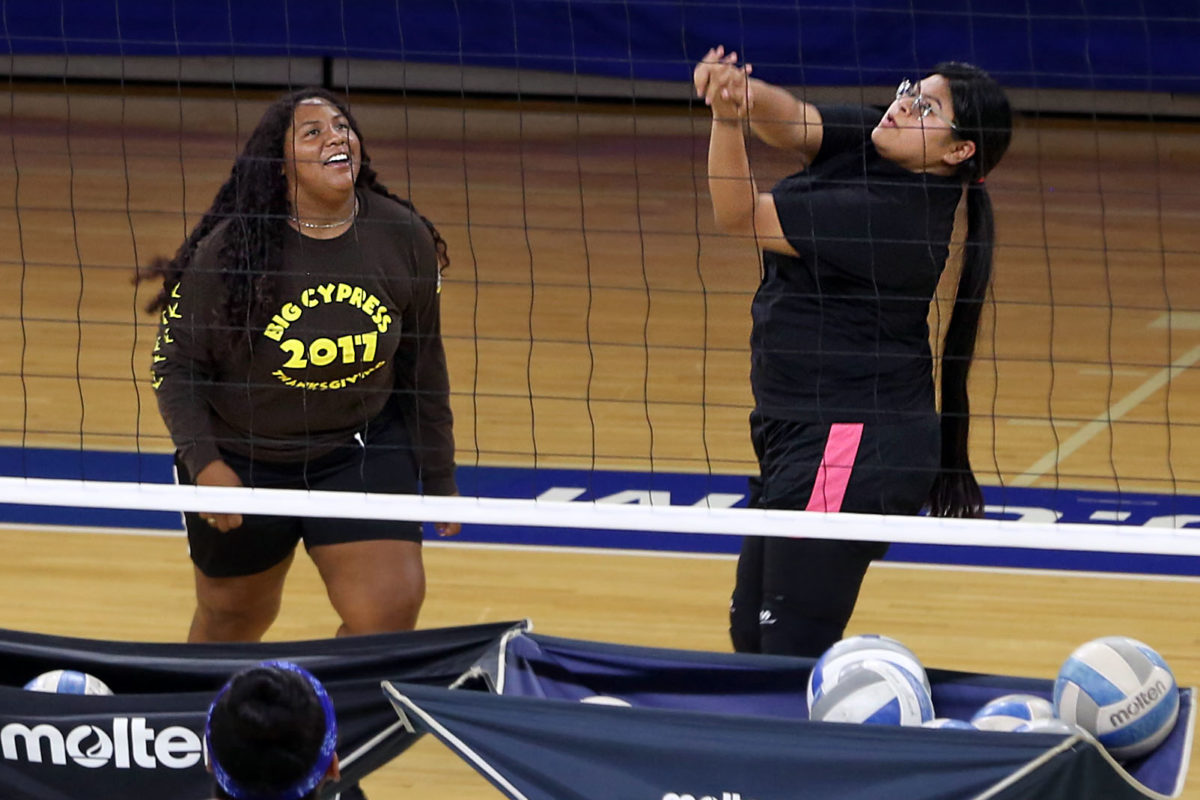 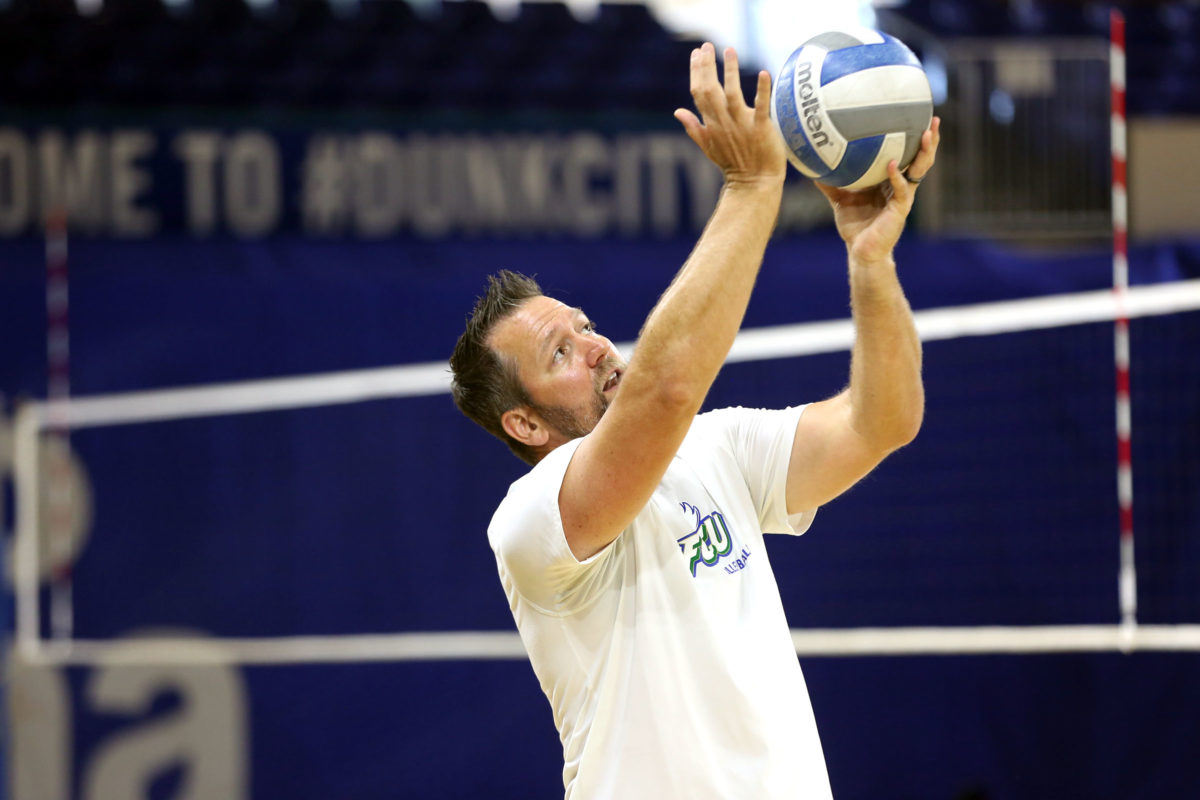 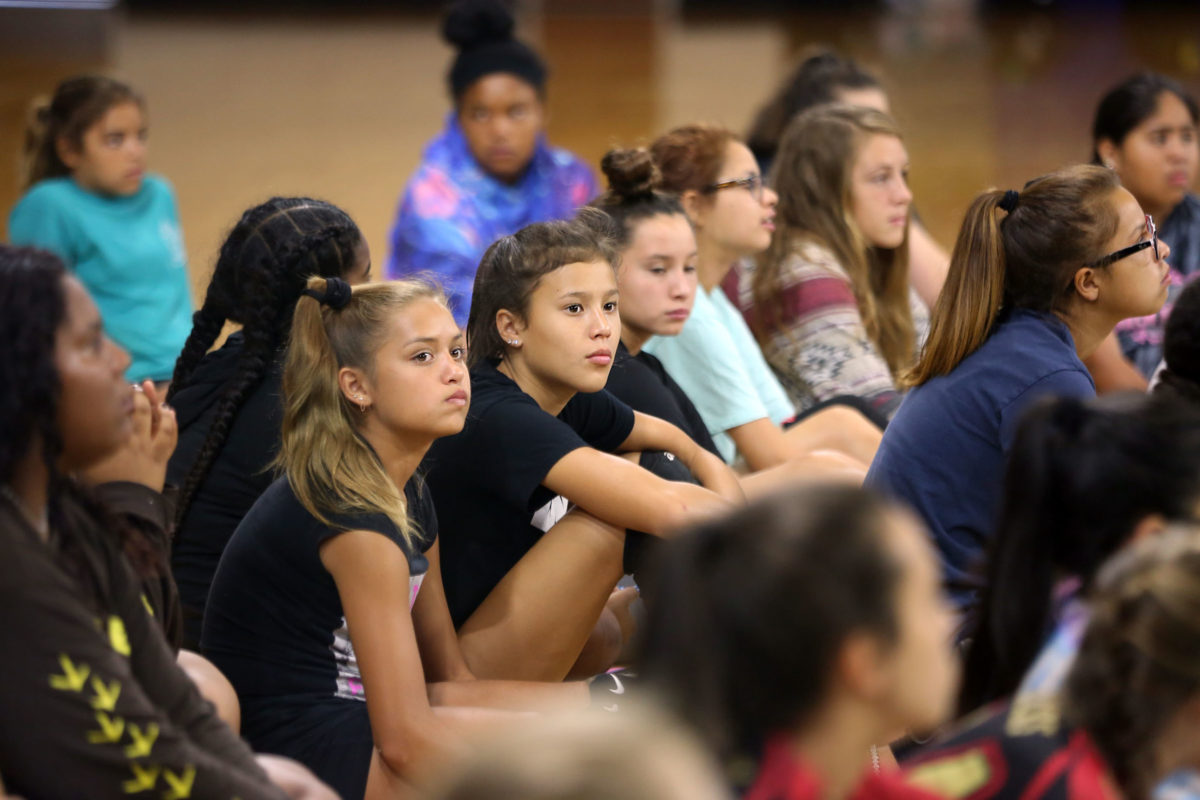 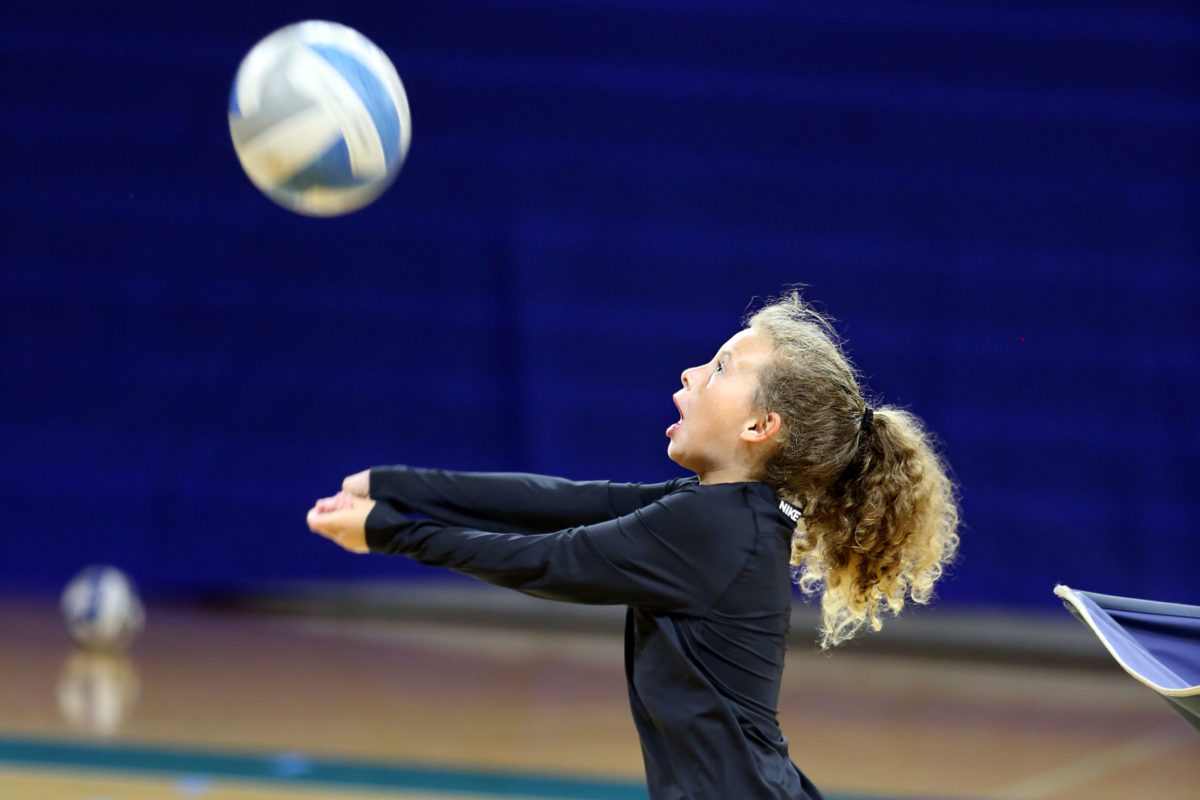 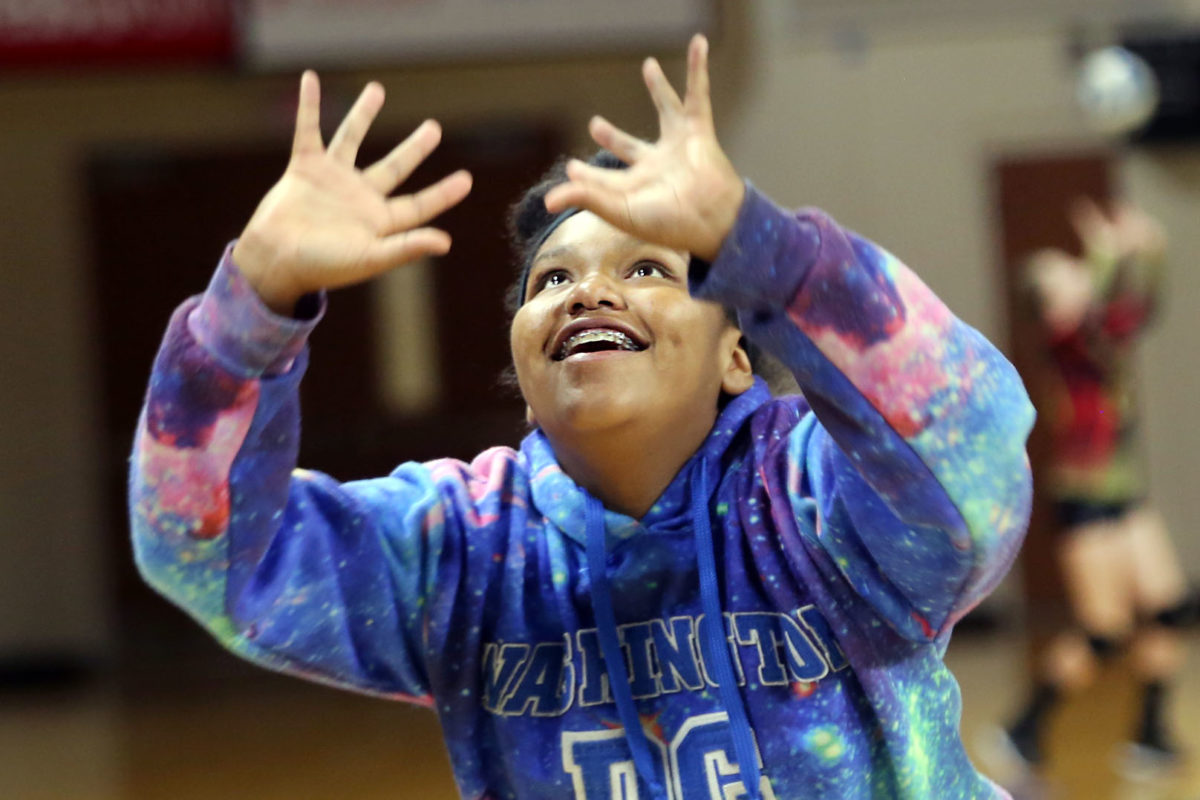 Jana Johnson has a ball as she hits one back during a drill at the FGCU volleyball clinic. (Beverly Bidney photo) 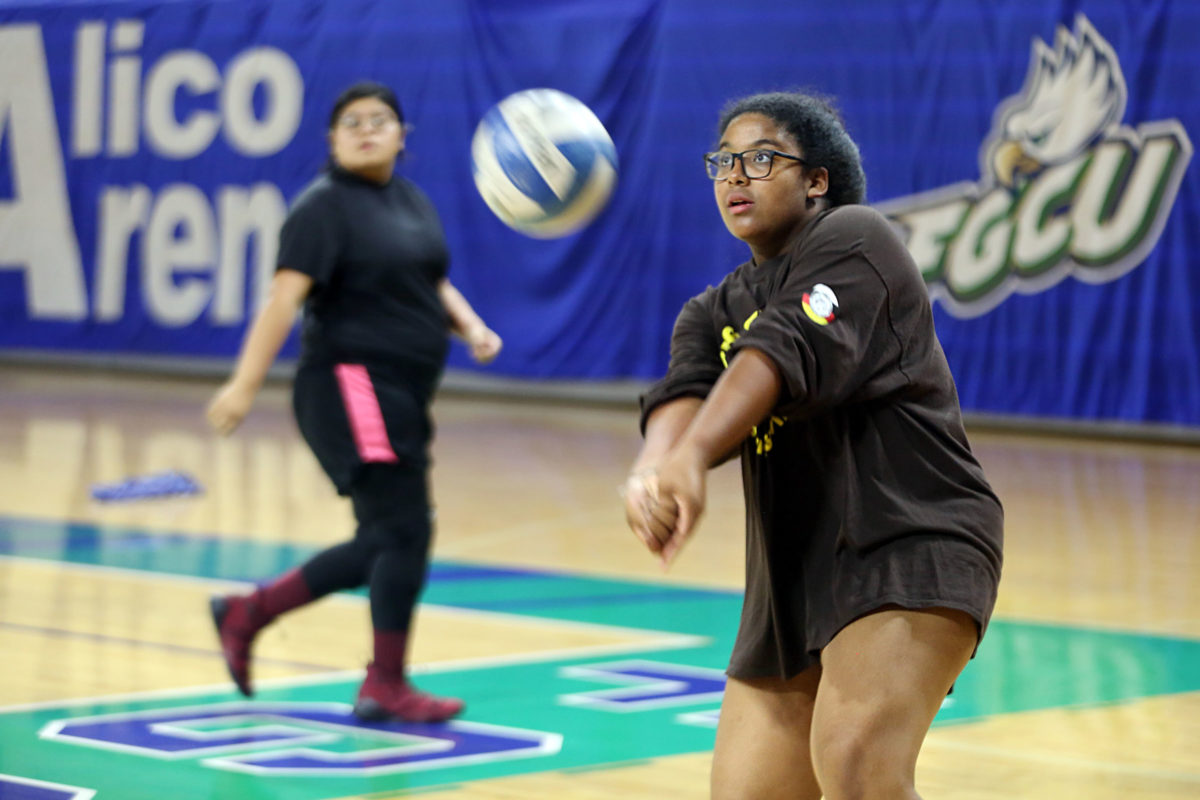 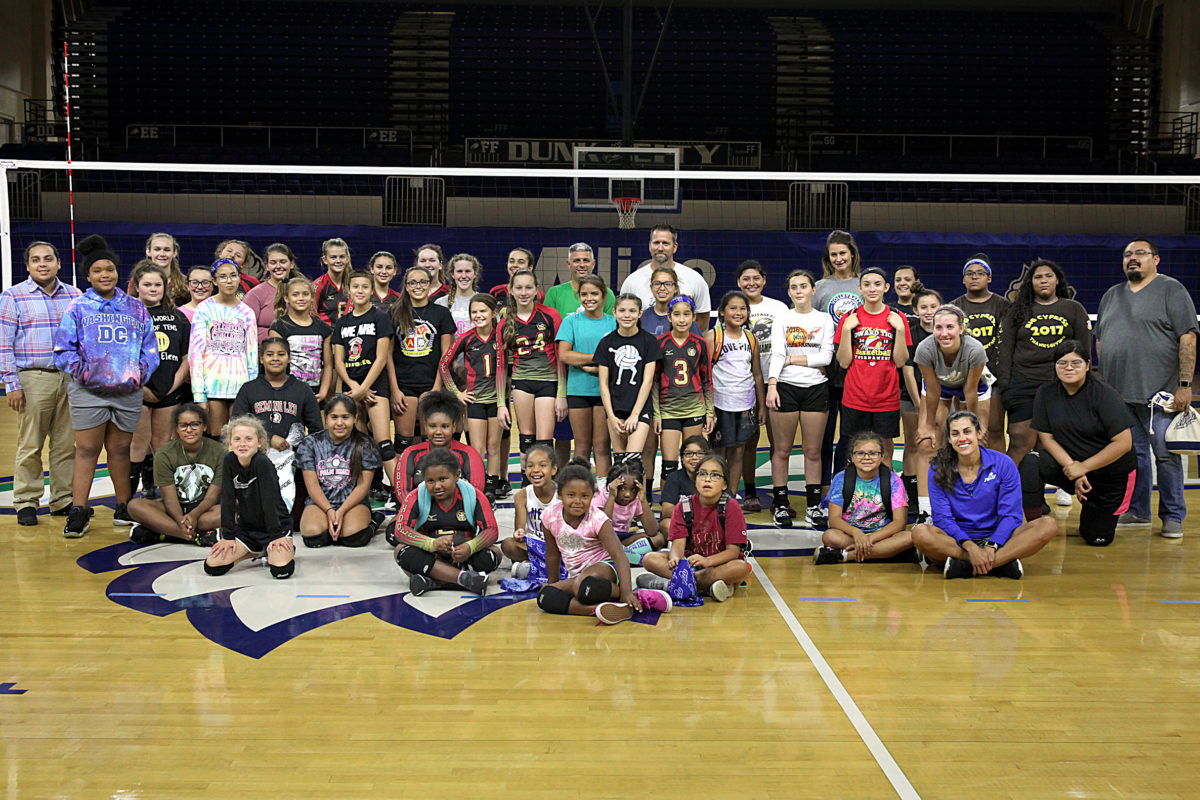 Florida Gulf Coast University volleyball clinic participants and coaches gather on the court for a portrait June 9 at FGCU’s Alico Arena in Fort Myers. Most of the players were from the Brighton and Big Cypress reservations. (Beverly Bidney photo) 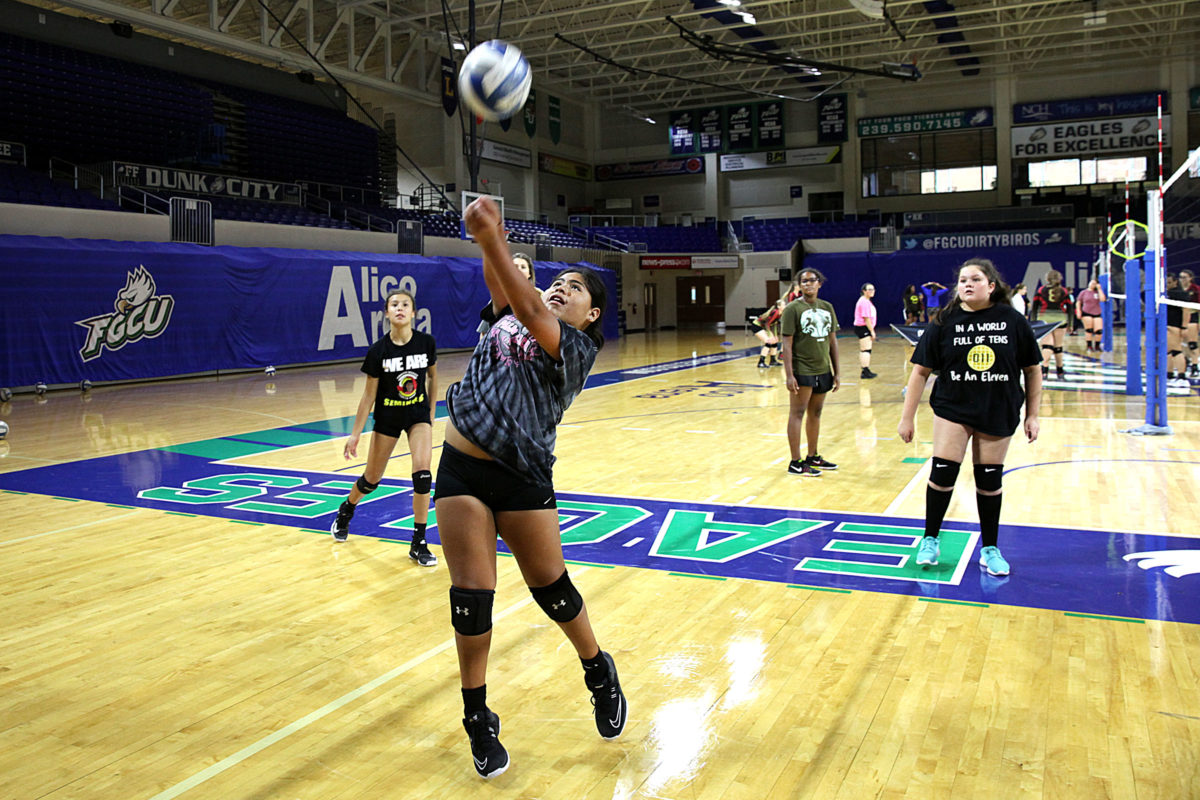 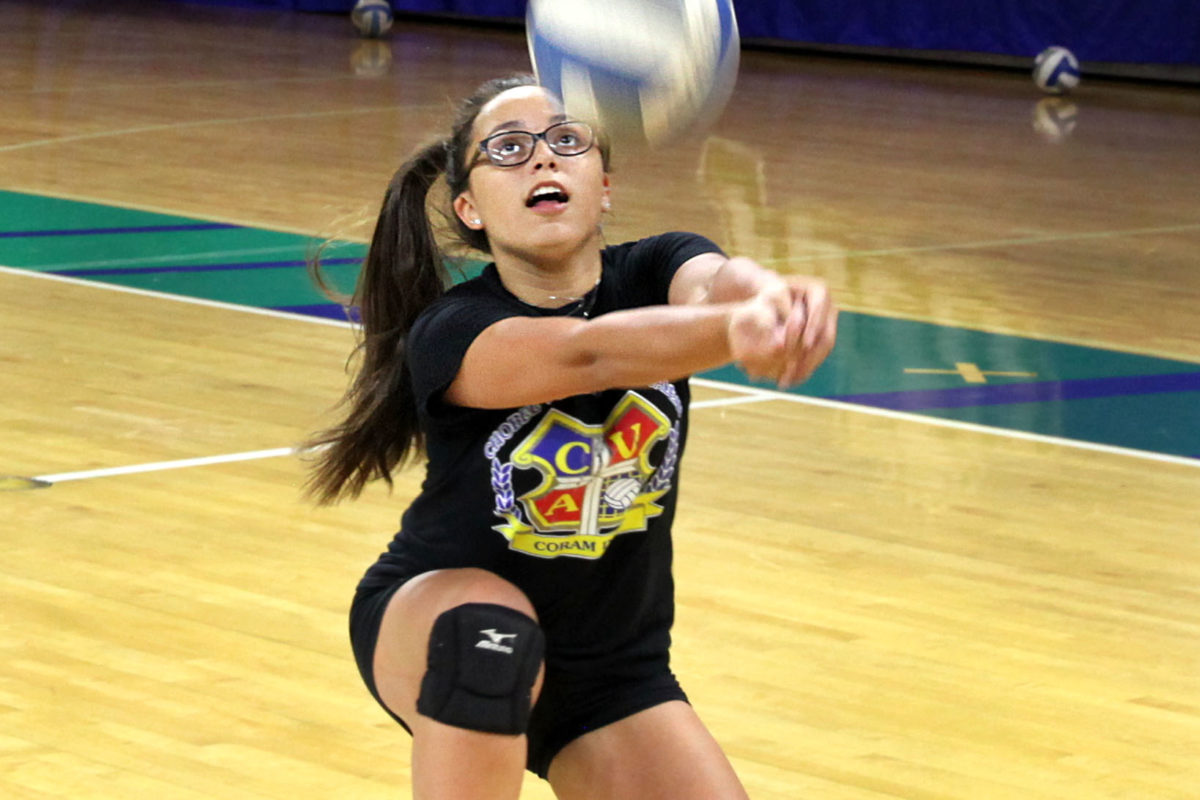 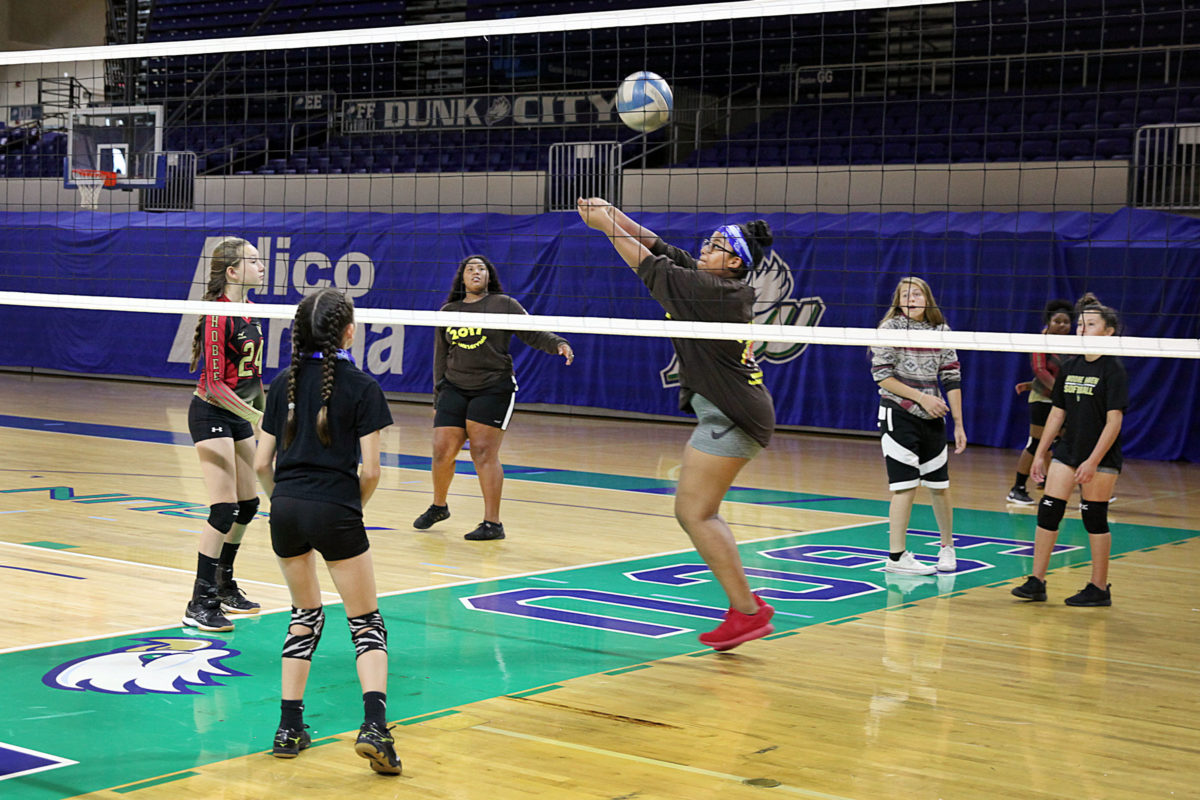