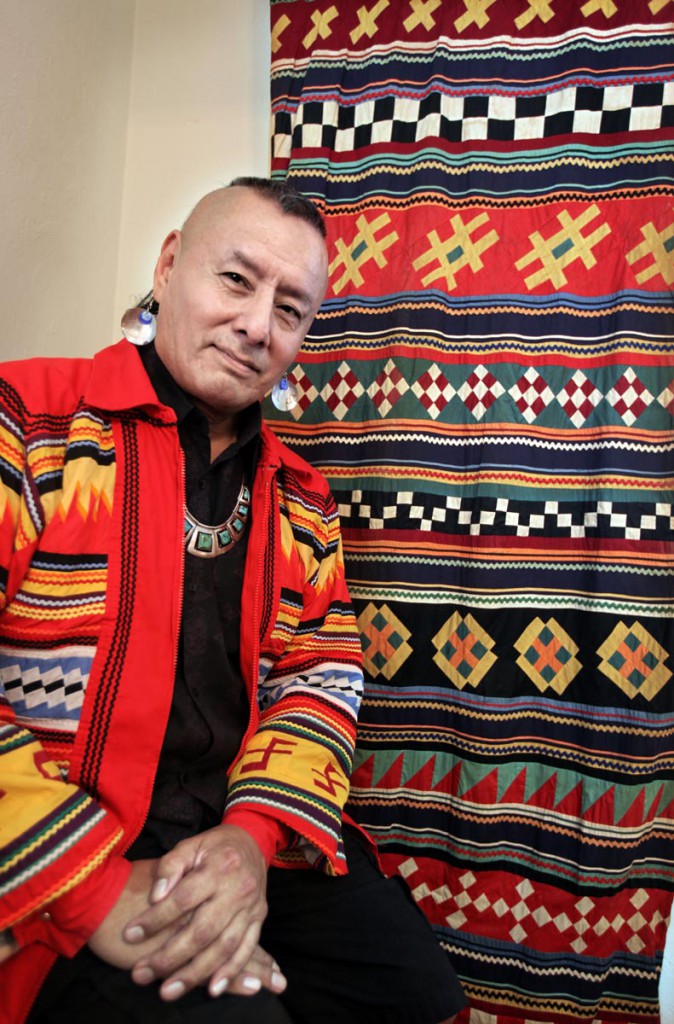 FORT LAUDERDALE — No matter what road Larry Mike Osceola II traveled during the past 55 years of his life – in the Army, through parts of Europe and a decade of adventures in Key West – his heart never left home.

Now settled in Fort Lauderdale, Osceola is on a mission to bring the past home by discovering and purchasing dozens of Seminole artifacts, especially patchwork, off the Internet auction site eBay.

“Welcome to the ‘east side consulate,’” he joked, leading a guest through his driveway, past the billowing mass of a large Seminole flag and through his front door.

The great-great-great-grandson of warrior Chief Osceola and son of Big Mike Osceola, a member of the historic Seminole Tribe’s Constitution Committee, introduced a recent “holy grail” find amid nearly 125 items that fill shelves, walls and closets.

“This is my jewel,” Larry Mike Osceola said.

The 5-foot-by-10-foot tapestry made up of more than 40 fabric sections, 10 of them intricate patchwork and more than a dozen ric rac strips, hangs regally by a window. A pillow made of patchwork rests on a nearby stool.

“These could be the only pieces like them in existence,” he said. But questions linger about whose hands crafted it.

Osceola said the items were from a six-panel window treatment fashioned by Seminole women in the mid- to late 1940s and purchased by then Florida State Attorney George Ambrose Worley for his North Carolina summer home. A portion of the right side of the floor-to-ceiling drapery turned tapestry is frayed and sun bleached. The pillow was likely crafted from remnants of another panel.

According to Worley’s grandson, R. A. Worley, from whom the tapestry was purchased for $125 in September 2013, it is unknown if the panels were commissioned or bought already made. It is unlikely, though, for handmade window drapes to be executed without measurements ordered by a buyer.

“And what part of the state did (my grandfather) travel to to get them? He was wealthy and eccentric,” said R. A. Worley in a letter that authenticated the purchase.

Osceola and partner Brian Hill believe that the panels were probably made by Seminole women at the Musa Isle or Tropical Hobbyland tourist villages on the Miami River from 1935 to 1940. The duo, owners of Talla-Hasee Exports, hope to find out from a Tribal member exactly who stitched the historic drapery.

“Sometimes a Tribal member might recognize a pattern, or colors or anything else distinguishing,” Osceola said.

Other treasured patchwork Osceola rescued from eBay include three small, primarily pink wall hangings by Tribal elder Effie Osceola, of Trail, who is known for her high-level patchwork technique. The patchwork was sold to Osceola by a woman in St. Petersburg who said the pieces were displayed for decades in her parents’ gift shop. Original, now yellowed tags scrawled with Effie Osceola’s name, confirm their origin. A fringed sash, creator unknown, is another favored piece. No information came with the sash.

Larry Mike Osceola, whose mother is honored Seminole doll maker Minnie Doctor and grandmother is the late Alice Osceola who may have been the first to incorporate patchwork into a cape, also has rescued dozens of dolls, baskets, musical instruments, postcards and photographs from the Internet retail site.

Tiger, credited as the force behind the Miccosukee Tribe’s eventual recognition by the United States government, signed at least two items now in the Osceola and Hill collection.

“I am the curator of these pieces, but their importance goes way beyond me,” Osceola said.

Eventually, some of the historic items will find homes at the Ah-Tah-Thi-Ki Museum on the Big Cypress Reservation, but they hope a solid inventory of new, high-quality and authentic creations could be inventoried for sale in a boutique setting in Paris, France.

“I’ve always been a big history buff but now I appreciate the absolute beauty of the patchwork art form, the uniqueness and the history behind it,” Hill said.

Osceola and Hall are careful not to purchase “bogus” Seminole works.

“A dead giveaway is bunched stitches and patchwork that does not lay flat. Sometimes, the giveaway is that it is too perfect. Sometimes the patterns are too big so they lack creative spirit,” Osceola said. “You have to see a grandmother’s hand on the work.”

If anyone can identify the makers of the drapery turned tapestry recently purchased by Larry Mike Osceola II, call 954-646-5764 or send an email to MikeOsceola@comcast.net.