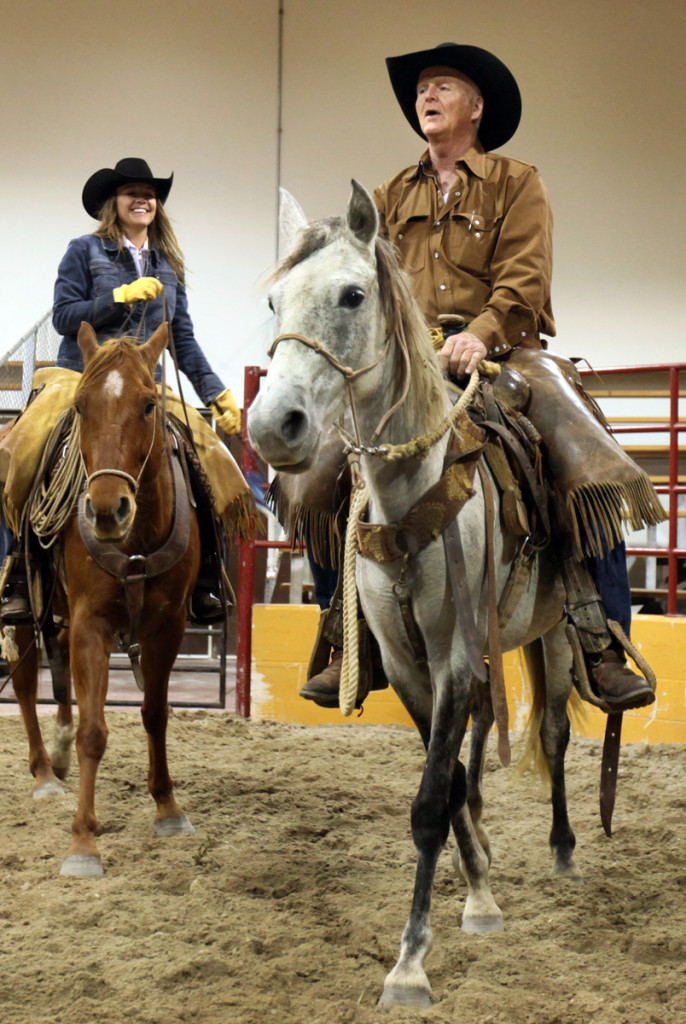 BIG CYPRESS — Paul Daily takes no credit in secrets, magic or super powers for his rare ability to calm, saddle and ride a wild horse in just two hours. The Louisiana cowboy and founder of Wild Horse Ministries said his talent comes from a higher authority.

“It’s the way God works in us. It takes attention, trust and submission,” Daily said to a crowd of 50 spectators gathered Jan. 15 for a heavenly inspired horse training clinic at the Big Cypress Reservation.

Step by step inside the clay covered 4-H arena, Daily led an unnamed and untamed Cracker mare to being saddled, trotted and laid prone before him in complete surrender. For Daily, the demonstration, which he first introduced at a Sunday school lesson in 1997, is about learning life lessons through the love of God.

The Rev. Salaw Hummingbird, of Big Cypress First Baptist Church, said the message is universal. Rev. Hummingbird, with Moses Jumper, brought the ministry to the community for the eighth year.

“The round pen of the corral represents the world. The horse is us. We may run from God or the church, but God has a purpose for us and if we listen to His word and trust in Him, we will learn that purpose and respond to it,” Rev. Hummingbird said.

The gray dappled horse was at first fearful and hesitant while Daily and his daughter Lenore on horseback slung soft ribbons that caressed the mare’s body. Soon, Daily walked closer, eventually lifting his hand to touch the mare’s face. Within the first hour, father and daughter were able to stroke the mare with both hands.

All the while, Daily spoke alternately to the horse and the crowd, gently paralleling how becoming one mind with the horse and accepting God are similar.

“It’s like looking in a mirror,” Daily said. “See how the mare tried to pull away at first, but now is still? One touch led to this.”

The mare began to circle the corral as Daily tied a line around her head and began with gentle tugs to nudge her steps in the right direction. Still, the line was loose and the horse was free to choose her participation.

For Daily, trials and tests are a way of life. Humans walk in circles, too, like he did, until they walk with the Lord, he said.

“Sometimes we can’t control what comes our way, but we can control how we respond. Wherever I lead, she follows. Wherever He leads, I follow,” Daily said. “God does not drag you around.”

Only bucking twice, the mare succumbed to Daily‘s direction. She accepted the saddle cushion, the saddle, a bridle and Daily’s body riding atop freely around the corral before Daily had her lie down at his feet.

Jumper, who called Daily a “horse whisperer,” said spectators are always amazed at how quickly Daily can bring a horse to peaceful obedience.

“It is not a trick. Horses do not lie down and stay down like that,” Jumper said.

But Daily does not refer to himself as a “horse whisperer.” For him, it’s about understanding and trusting how God uses challenges to change lives. He said a horse is always a reflection of the rider.

“I haven’t won anything. It was not a competition. For me, when I don’t know who to trust I can know I can always trust God,” Daily said.