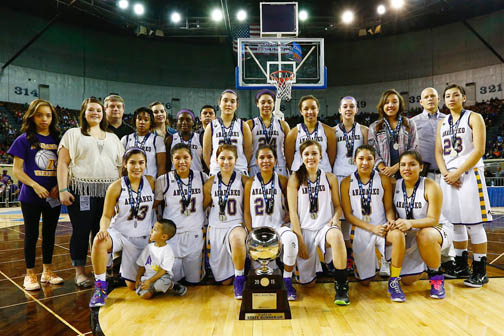 Three years after winning a state championship as a freshman, Cara came up just shy of capturing another state title, as her Anadarko High School girls team fell to Locust Grove, 51-33, in Oklahoma’s Class 4A final March 14 at State Fair Arena in Oklahoma City.

It was the third state championship game in the past four years for Anadarko. For the second consecutive year, Anadarko earned runner-up honors. This year didn’t feature the late heart-breaking drama of last year’s championship game, so the outcome was easier for Cara to digest.

“I was over it because we didn’t play as good as we should have,” she said. “Last year we lost on a last-second shot. This year we were down the whole game.”

The teams were tied 11-11 after the first quarter before Locust Grove seized control with an 11-4 spurt in the second quarter.

Cara scored four points, snagged a team-high three steals and grabbed five rebounds. Controlling the boards – especially on defense – is one of her strengths.

“That’s doing my job. That’s my specialty,” she said.

Cara, a second-year starting forward, said the team figured it had a good shot to win it all this season because it was basically the same unit – including six seniors – that reached last year’s final.

“We all grew up together,” Cara said about her teammates from the class of 2015.

Anadarko, which went 27-3 this season, won more than 100 games during Cara’s four years on the team.

As she transitioned to her spring slowpitch softball season at Anadarko, Cara had already accumulated plenty of honors in her senior year. She was named homecoming queen, selected to play in a 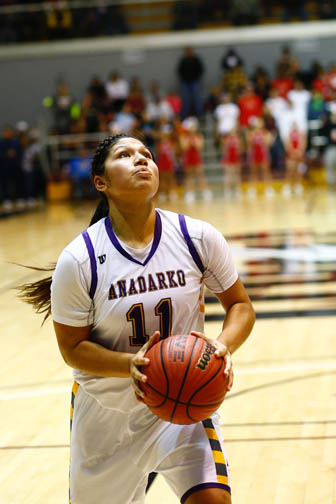 After graduation, Cara said she will likely attend Cameron University in Lawton, 40 miles south of Anadarko. The daughter of Tara Tartsah and Curtis Osceola Sr. plans to study nursing.

Cara wasn’t the only Osceola in her household to reach the state tournament this year. Anadarko’s boys basketball team, which features her brother Curtis Osceola Jr., won its district, area and region before being eliminated by McLain in the 4A state quarterfinals, 53-51, on March 12. Anadarko compiled a 25-2 record.

Curtis, a sophomore, also plays for the school’s football team, which posted an 11-1 record last fall.

The Osceola family also made its mark in the collegiate ranks. Kaitlynn Osceola, who was a teammate of her sister Cara on Anadarko’s state championship team three years ago, concluded her first season on the Haskell Indian Nations University women’s team in February. Haskell won 10 of its first 11 games on its way to a 20-9 record, by far its best season in the past four years.

For the season, Kaitlynn averaged under 10 minutes of playing time in 24 games and had 32 rebounds. Last year Kaitlynn played for Broward College.