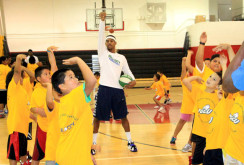 BIG CYPRESS — The tallest man on the basketball court received the most attention.

Eric Moeller, a 6-foot-11 forward, was a fan favorite for about 60 youngsters who participated in Florida Gulf Coast University’s youth basketball clinic Sept. 6 at the Herman L. Osceola Gymnasium in Big Cypress. When the kids were asked who is their favorite basketball player – Moeller, LeBron James or Kobe Bryant – the player known as “Molls” received the loudest applause.

The clinic served as another example of the continuing relationship between the Seminole Tribe and the Fort Myers university, whose student enrollment of 14,000 includes 115 Native Americans.

Why was Moeller – a sophomore transfer who has yet to play his first game for FGCU – the most popular player?

Dunks put FGCU on the nation’s college basketball map in 2013 when the Eagles slammed their way into fans’ hearts with stunning upsets against Georgetown and San Diego State in the NCAA tournament.

The “Dunk City” nomenclature earned during the journey to the Sweet Sixteen remains with the program, including on the back of the kids’ T-shirts.

“They throw a lot of alleys and they dunk a lot. Pretty cool,” Ricky said.

As a seventh-grader on the Ahfachkee School basketball team, Ricky has plenty of time left to hone his skills and attain his goal of playing college basketball. The young point guard made a step in the right direction at the clinic by being named camper of the day.

“Usually the camper of the day has the best attitude, always has a smile on his face and asks questions. He’s coachable. He does a great job at being a player,” Tyler Schwab, FGCU basketball’s coordinator of operations, told the kids before announcing Ricky as the winner.

With the camper of the day prize – a new basketball autographed by the FGCU team – tucked under his arm, Ricky said the clinic proved beneficial in more ways than one.

“It was great. They’re really good. I learned you have to work hard and stay good in school,” he said.

The clinic tried to reach beyond layups and jump shots.

During a question and answer session at midcourt, Schwab and the players stressed to kids that all Eagles had to focus on their schoolwork and maintain certain academic requirements to remain on the team.

Afterward, senior guard Jamail Jones said kids should never give up on school.

“Just stick with it, no matter how hard it is. Get some help. Get a tutor. Stay with it,” said Jones, a senior guard from Atlanta.

Jones found his academic niche when he arrived in Fort Myers as a freshman and made sociology his major.

“I’m a people person,” he said. “I like being around people and interacting with people. I like talking in general. I felt like why not study people and how they interact and what they think.”

Jones is on track to earn a bachelor’s degree in spring 2015.

“I can take a deep breath once I get my degree in my hand because I’ve been at school pretty much all my life,” Jones said. “Once I get my college degree – the last step of school – it will be exciting, emotional. It will be one of the best days of my life.”

Brett Comer, a senior guard from Winter Park, echoed his classmate’s sentiments. FGCU’s all-time assist leader is also slated to earn his degree in the spring.

“It will be one of the proudest moments in my life. Graduating college is a huge deal,” Comer said.

Comer became a Dunk City star thanks to his game-high assist totals in the two NCAA tournament victories. Off the court, he tested various majors, including business and criminal justice, before determining public relations would suit him best.

After college, Comer and Jones said they plan to pursue professional basketball.

“I’d love to play in the NBA, but if that doesn’t happen, I’d play in Europe or Australia,” Comer said.

Regardless of where and how far they advance, Comer and Jones will always have their education.

“When I’m done playing basketball – whenever that might be – I can have something to fall back on,” said Comer, who noted a career coaching basketball is another possibility after his playing days end.

“I might try to be an entrepreneur after – whatever my degree will let me do that will make some money,” Jones added.

The clinic, organized by the Seminole Tribe Recreation Department, marked the first time a basketball team from FGCU visited Big Cypress. About a quarter of the youngsters were girls.

J. Webb Horton, assistant director of FGCU’s Office of Community Outreach, said there’s a chance that the Eagles women’s basketball team will offer a clinic on the reservation at a later date.

Horton said the relationship between the Tribe and FGCU Athletics is about 4 years old. Tribal kids have attended FGCU basketball and softball games in Fort Myers and met student-athletes. FGCU personnel, including Horton, were speakers at educational events in Big Cypress and Brighton. The Tribe sponsored a FGCU annual Night at the Nest dinner and auction.

Horton said the relationship is about more than sports.

“[Big Cypress Councilman] Mondo Tiger’s big thing is education,” Horton said. “The basketball camp shows our commitment to the kids here, not only at this reservation, but any reservation we work with. They get to meet young men … Education is the basis for everything you want to do.”

Because the oldest kids at the clinic were middle school students – such as Pemayetv Emahakv Charter School sixth-grader Dalence Carrillo, who won the clinic’s knockout game – it will be at least five years before any of the participants enter college at FGCU or elsewhere.