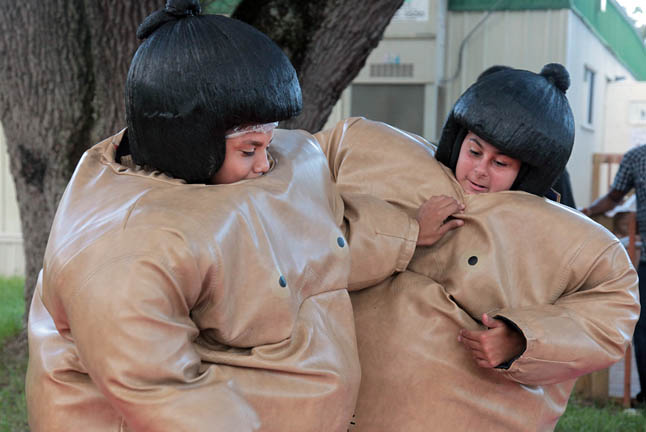 HOLLYWOOD — The ancient sport of sumo wrestling was embraced by the Hollywood Boys & Girls Club Sept. 4 with bouts to determine which young competitor would emerge victorious.

The 2,000-year-old sport was the highlight of a Japan-themed, end-of-the-month celebration for community members. Revered throughout Japan, sumo originated in the Shinto religion; strict rules and traditions compel the sport and the lifestyle of the wrestlers.

Seminole kids mimicked professional sumo wrestlers, or rikishi, by wearing large padded suits while trying to push each other out of the ring. Master of ceremonies Anthony Gentry, 13, made sure the event had the appropriate level of levity as he called bouts and helped competitors prepare.

“Now put on the weave of truth,” he said as he secured a plastic helmet, which resembled the traditional sumo top-knot hairdo, on a competitor.

Clad in padded armor, opponents faced off and the fun began – spectators and wrestlers broke out laughing when someone hit the mat. The fiercest competitor, C.J. Osceola, 13, went undefeated.

“You bring great honor to your name,” emcee Anthony said.