NEW ORLEANS — Although not widely associated with Mardi Gras regalia, intricate Native American beadwork is a common feature on the costumes of the Mardi Gras Indians.

Comprised of African Americans who pay tribute to Native American tribes that helped runaway slaves escape in the 18th and 19th centuries, the Mardi Gras Indians have a long tradition of dancing, singing and competing for the prettiest “suits” or costumes during Mardi Gras in New Orleans and on the Sunday before or after St. Joseph’s Day.

A trio from the Mardi Gras Indian Show performed during the 2016 Excellence in Journalism Convention hosted by the Society of Professional Journalists, the Radio Television Digital News Association and the Native American Journalists Association in New Orleans on Sept. 19.

“The escaping slaves ran away into the swamps, where they met up with Indian Tribes,” said Mardi Gras Indian Show producer Herb Gibson. “The connection grew between the slaves and the Native Americans; they got used to each other’s cultures.”

Legend has it that some Choctaw, Seminoles and Chickasaws living in Louisiana in the early 1700s aided escaping slaves in the bayou. With the help of the tribes, the slaves learned to survive off the land and lived in camps with the Indians just outside of New Orleans.

Unable to participate in traditional Mardi Gras groups, African American revelers developed their own tradition by organizing the Mardi Gras Indian tribes as krewes. There may be between 20 and 50 of these tribes, but secrecy is also part of the tradition. Each independent tribe has between half a dozen to several dozen members. Prior to the 1960s, Mardi Gras Indians used to clash violently to claim territory and settle disputes with rival tribes. Now they keep the competition friendly with theatrical displays of dominance through dance.

“They stopped fighting and became more of a competition of elaborate costumes,” Gibson said. “Now they all compete to see who has the best-looking ‘suit’ on Mardi Gras day.”

During the parades, the Mardi Gras Indians continue to honor the Indians who helped slaves reclaim their freedom with songs and dances that are a mix of Native and African American culture.
Beadwork is prominent on the costumes, which also feature colorful ostrich plumes, feathers, sequins, rhinestones and ribbons.The costumes can weigh up to 100 pounds and are considered works of indigenous folk art.

The Backstreet Cultural Museum, in the Tremé section of New Orleans, houses one of the largest collections of Mardi Gras Indian costumes. Made by local artists, the costumes can take up to a year to construct and cost tens of thousands of dollars. 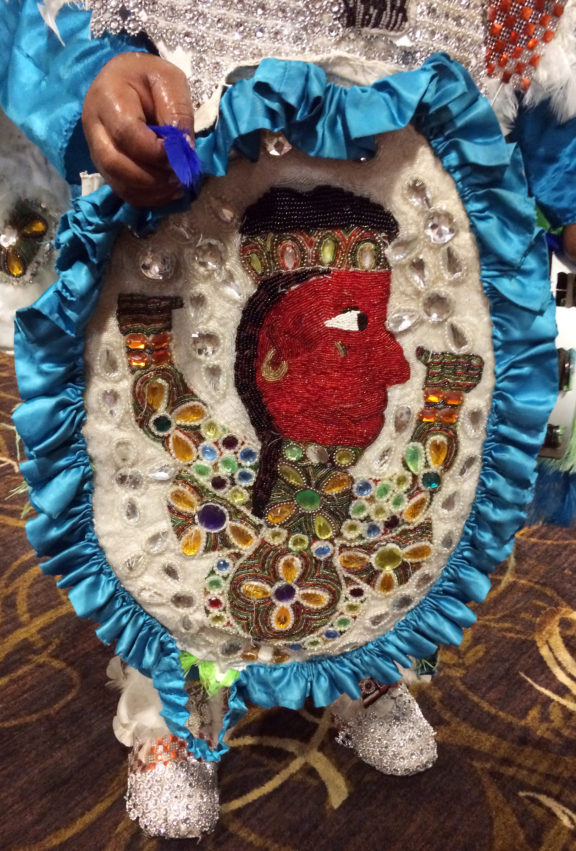