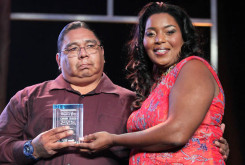 FORT LAUDERDALE — Fort Lauderdale’s foremost conference center sparkled on a recent Saturday thanks to the United Way of Broward County Mayor’s Gala and a guest list of movers and shakers from the county’s 31 municipalities.

“Tonight is about 100 firsts and tonight we pay tribute to Broward County firsts who have also been pioneers,” said Broward County Mayor Barbara Sharief.

But the black-tie affair was not about the pioneers of a century past, she said.

The mayor’s “Celebration of Firsts” heralded 27 people to the stage to accept crystal-engraved awards for being the firsts of modern times, including Bobbie H. Grace, the first female African-American mayor of Dania Beach; Kathy Kenyon Conover, the first female police officer of Hallandale Beach; and John Fiore, the first openly gay elected official in Broward County.

Seminole artist Elgin Jumper, also called to cross the spotlight, was honored for an entire people that long predate the county’s existence. His crystal was inscribed: “Member of the True First Floridians – Seminole Tribe of Florida.”

Jumper was the only Native American honored at the event attended by more than a dozen Broward mayors, including Mayor Lori Moseley of Miramar, Mayor Walter Duke of Dania Beach and Mayor Frank Ortis of Pembroke Pines.

“Here, we have people who are the best of the best. Tonight we celebrate the past, present and the future while raising money for people who are suffering,” Sharief said.

Well-known and respected in South Florida art circles for his vivid, modernistic depictions of Seminole pride, culture and history, Jumper said he was surprised when he was invited to attend the event as a special guest. He was further “amazed” when called to the stage to stand amid others lauded for individual achievements.

“I am speechless, maybe for the first time in my life,” Jumper said after the ceremony. “A lot of good things have happened in my life during the last few years. I hope the good things keep coming.”