HOLLYWOOD — The Seminole Color Guard led the way for the Grand Entry that opened the 46th annual Seminole Tribal Fair and Pow Wow on Feb. 10. The procession of Tribal officials, royalty and VIP guests was followed by nearly 200 dancers who showed off their moves as they made their way around the floor of the Hard Rock Live arena in Hollywood. The arena reverberated with sound as host drums War Paint and Southern Styles kept the rhythm going. The floor steadily filled with dancers in their finest regalia, all abundant with colorful feathers, beadwork, ribbons, jingles, bells, headdresses and sashes.

“There was an energy and harmony all weekend,” said Pow Wow director Wanda Bowers. “It was better this year, there were more people in the audience and the dancers had fun whether they won or not.”

The celebration of culture held from Feb. 10-12 was also a showcase for Native American art, crafts, music and cuisine, but the main events were the dance and drum competitions. A vast pow wow circuit exists in the U.S. and Canada where dancers, drummers and their families see each other regularly at various venues. In Hollywood, participants vied for a piece of the $250,000 prize money, but the attitude inside the arena was one of friendship, respect and camaraderie.

“I’ve been dancing since I could walk,” said Dylan Prescott, of the Ho-Chung Tribe in Wisconsin. “It’s good to see different tribes together. The drums are good and we’re going to have a good time.”

Men’s dance categories were Fancy, Northern Traditional, Grass, Southern Straight and Chicken; women’s included Northern and Southern Buckskin, Fancy, Jingle, Northern and Southern Cloth. The swirling, bobbing and ever-moving dancers kept to the beat of the drum and stopped precisely as the final note was played. In all, 187 dancers from age 10 to 55 and over competed in 35 age appropriate contests.

“Dancing gives me freedom and takes me back to the creation,” said Melvin Nicotine, of the Red Pheasant First Nations in Saskatchewan, Canada. “We open the dance floor with prayers. It’s good medicine. We come to meet people from everywhere, share our culture and, most of all, to be in good spirits.”

Every dancer has his or her own reason for dancing.

“It’s a way to express myself,” said Keith Reed, of the Ho-Chung Tribe in Wisconsin. “I enjoy the dance and how the songs make me feel. It takes me away from everything and it keeps me in good shape, too.”

The Northern and Southern drum competition included eight groups of eight to 10 drummers. The drummers surrounded a large drum and, drumsticks in hand, sang and drummed together with passion. Three man hand drums also competed.

“I knew there was a reservation, but I never came to an event here,” Ramos said. “I love the customs, dancers and the singing. Each costume has its own identity, they are all beautiful. I will definitely come back with my family tomorrow.”

There was plenty to do during the three day-fair, including celebrity meet and greets with Martin Sensmeier, Roseanne Supernault, Irene Bedard, Aaron Lewis and Rudy Youngblood, live art demonstrations by Bunky Echo-hawk and concerts by the Cowbone Band, Ted Nelson Band, Osceola Brothers, Spencer Battiest, Derek Miller and Lewis.

Artist Bunky Echo-hawk creates his art live in front of an audience, who interacts and shares ideas with him. On opening day he created a large acrylic on canvas piece “Never Surrender the Breath of Life,” which depicts a Native American in a gas mask.

“We live in an unprecedented time where Native people are making our own movies, designing our own shoes, making our own paintings, writing our own books and litigating our own issues,” Echo-hawk said as he painted. Tribal Fair is an annual tradition for the Hinds family, of Pembroke Pines.

“We like to support the Seminoles and watch the dancing,” said Cindy Hinds, who attended with her four daughters. “But meeting ‘Pocahontas’, Irene Bedard, was the highlight of the day.”

About 2,400 students from area schools enjoyed the dancing and a Seminole warfare tactics demonstration on opening day but became much more vocal when the animal show began. “Otter” John Jones paraded around the floor holding a menagerie of creatures one at a time. Judging by the oohs and aahs, a Nile monitor lizard, red shouldered hawk and an owl were the crowd’s favorites.

Next up were Billy Walker and James Holt, who brought out the large alligators to be wrestled. The kids erupted in cheers and watched the show intently as Walker risked life and limb for their entertainment.

“We are such a diverse group of people,” said Tucomah Robbins, who performed in the Seminole warfare demonstration. “We get to tell our story and that’s never a bad thing. There are people that don’t believe Native Americans are still alive. This shows that people are willing to learn about us.”

Winners of the 2017 Seminole Tribal Fair and Pow Wow 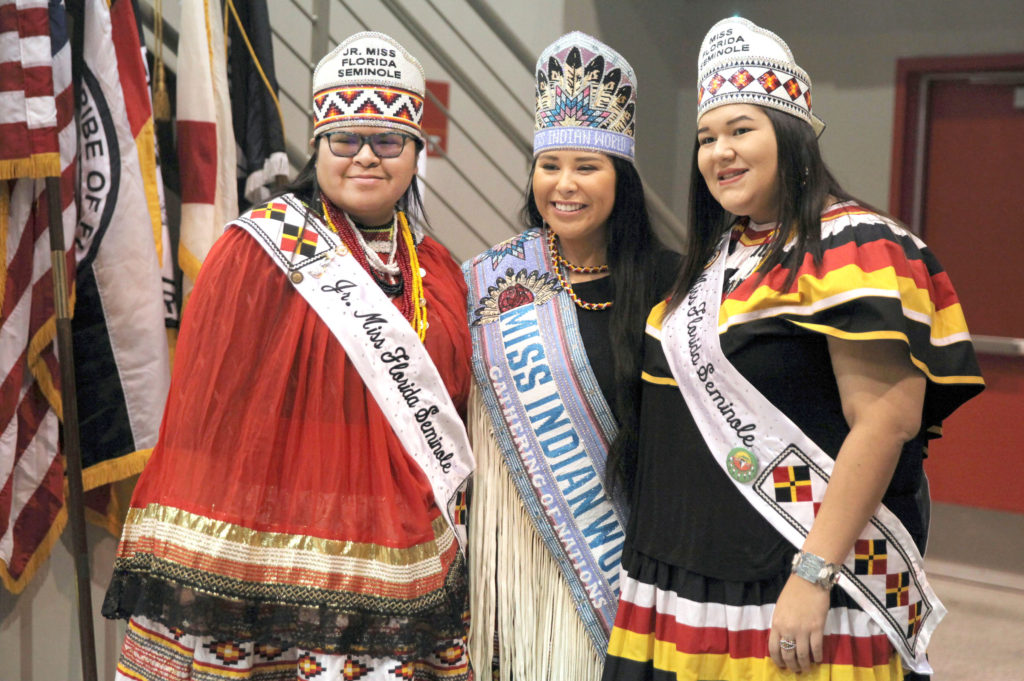 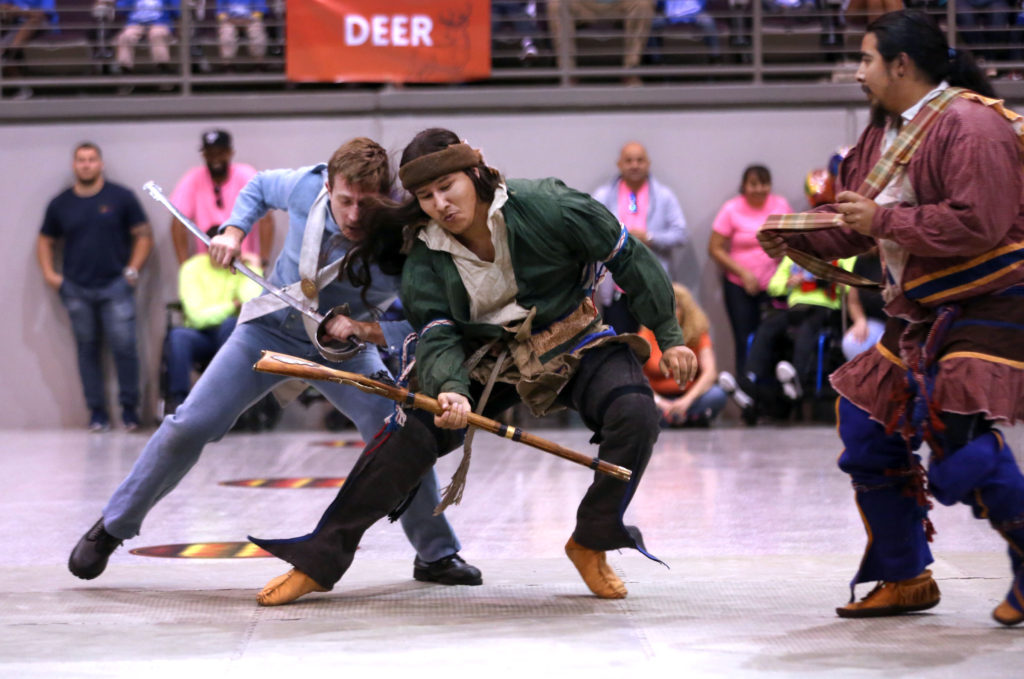 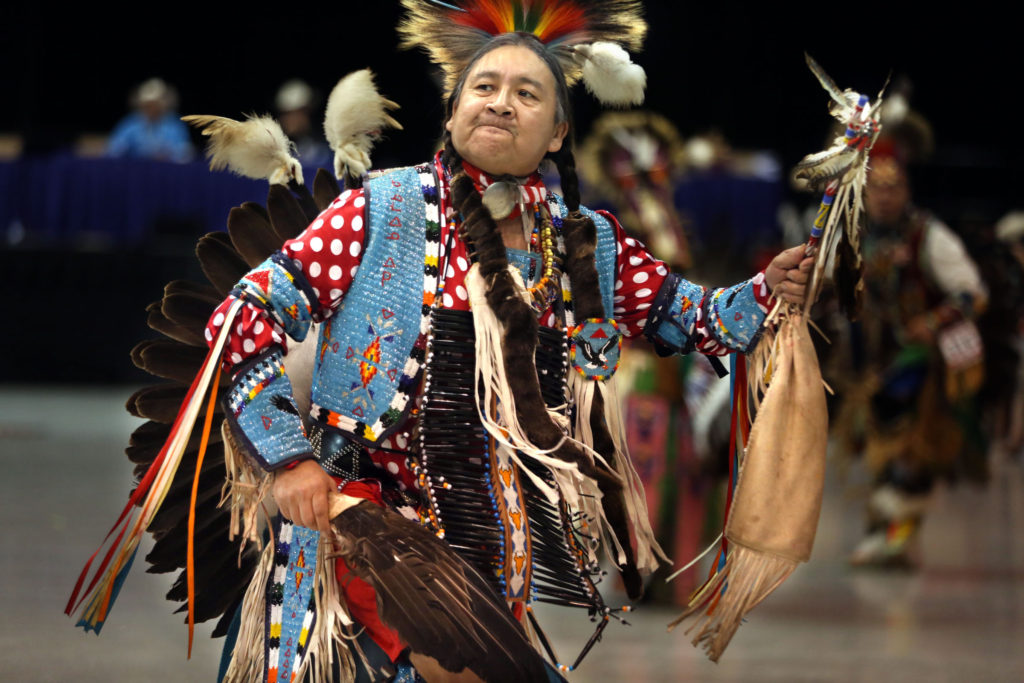 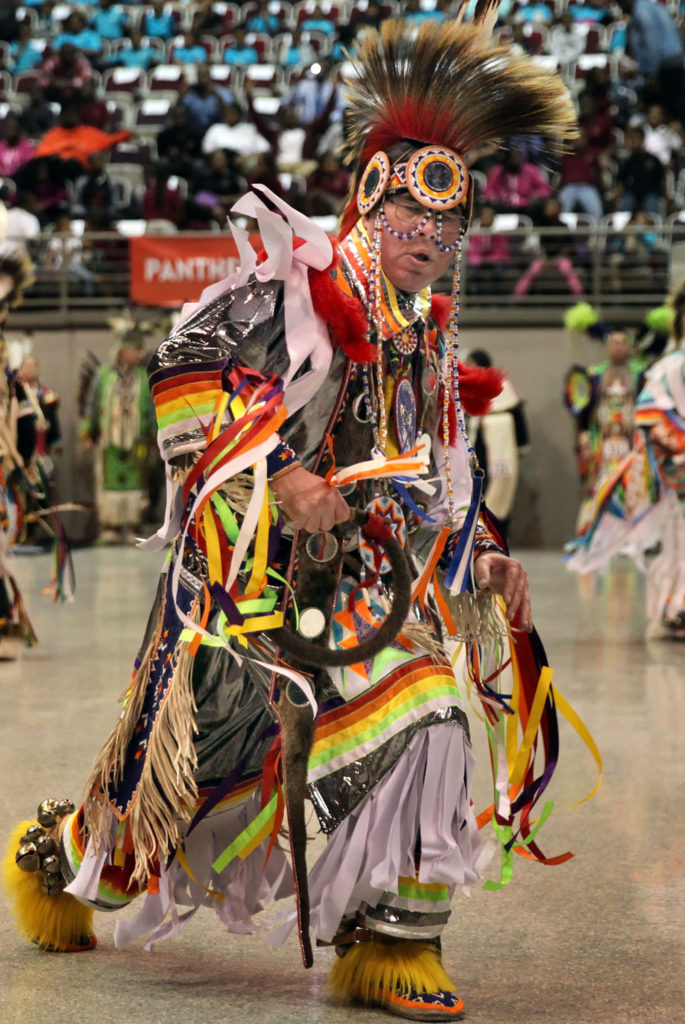 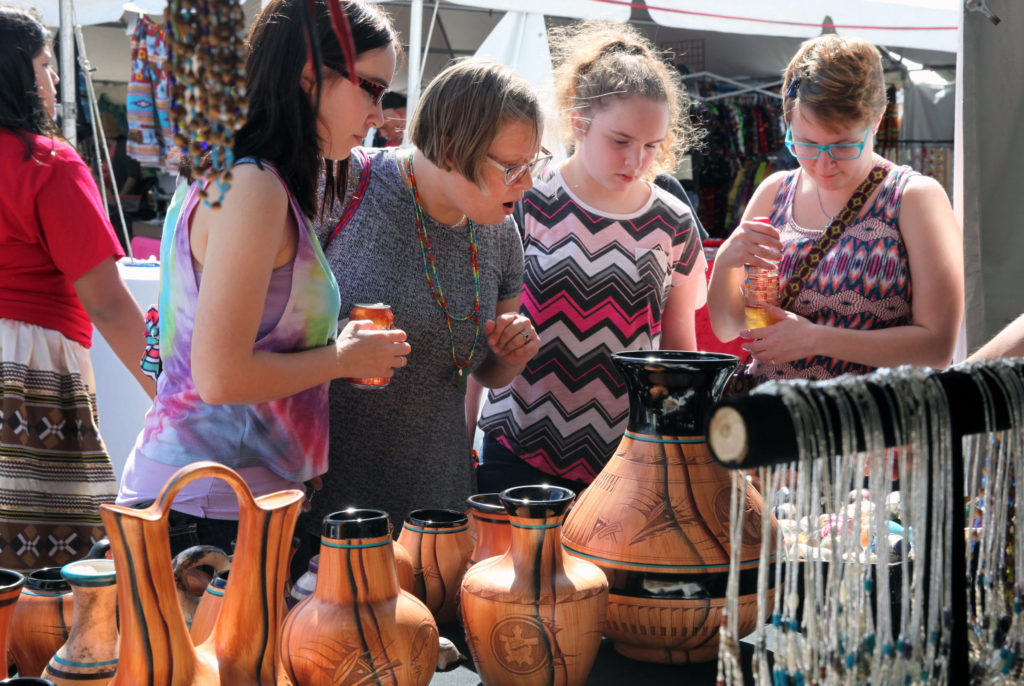 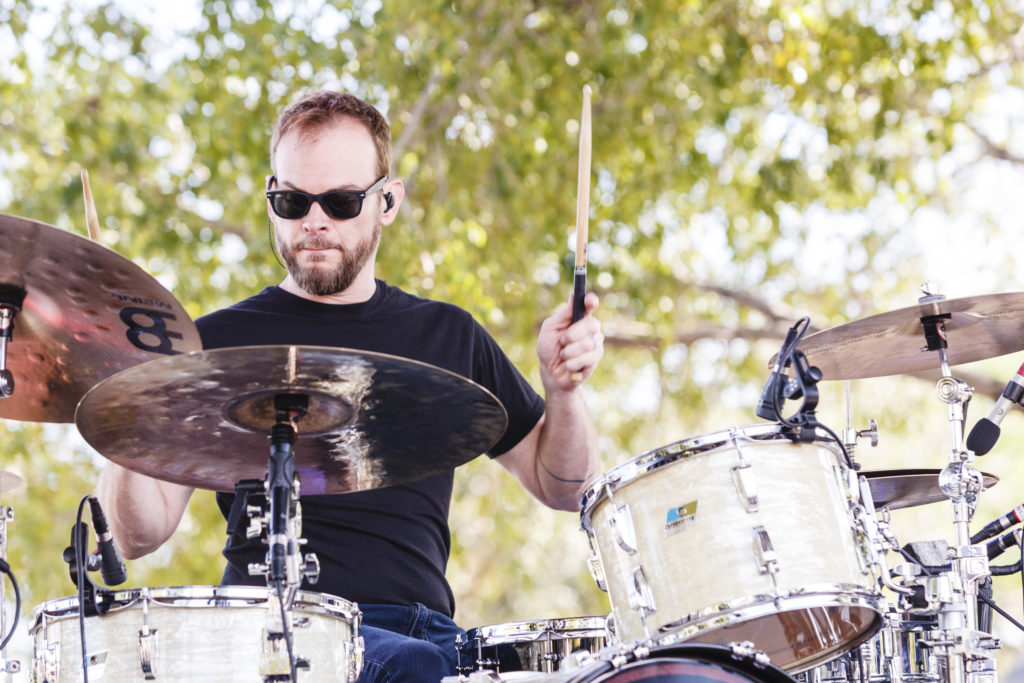 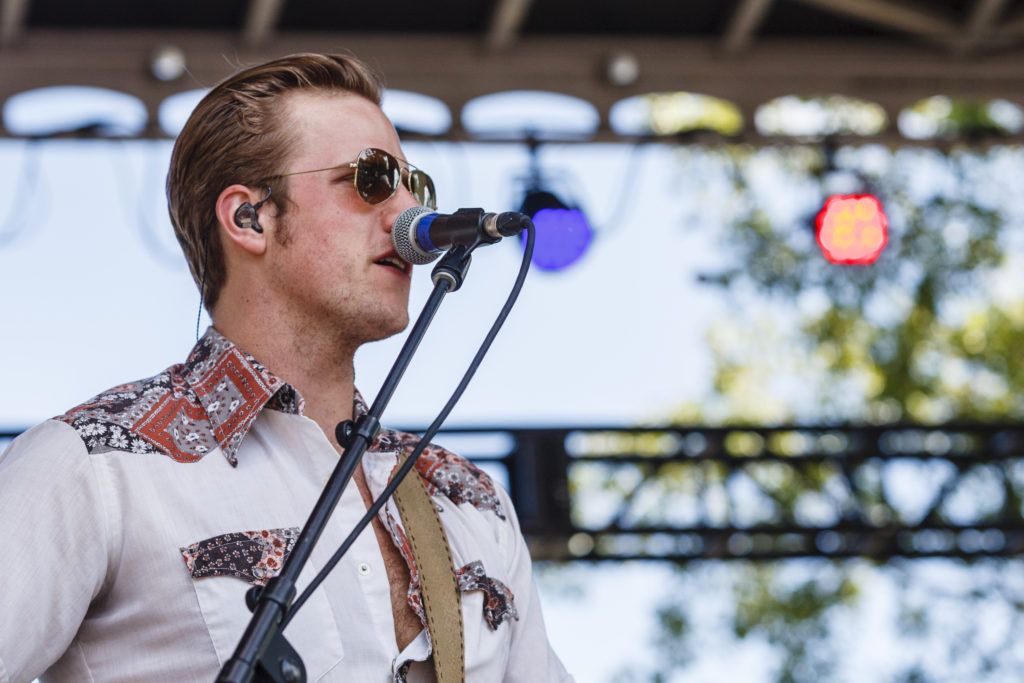 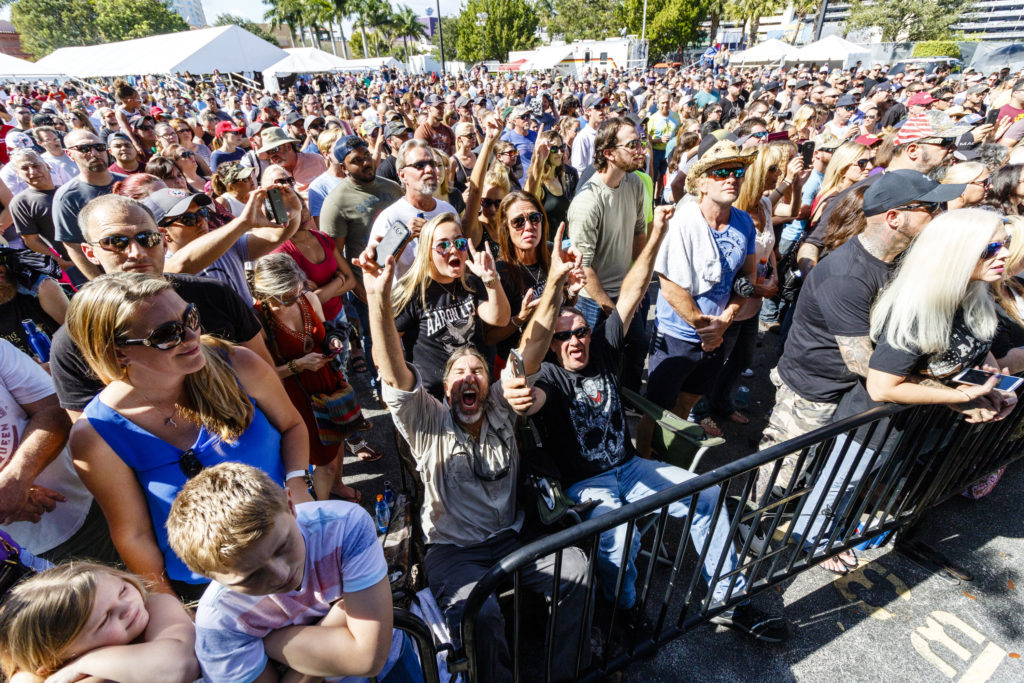