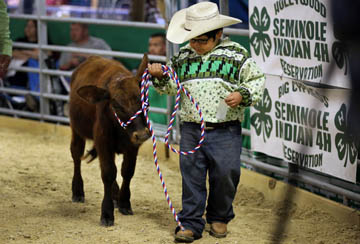 BRIGHTON — The cold, rainy and blustery evening of March 27 soaked the Brighton 4-H grounds but didn’t dampen the spirits of 76 young competitors who vied for wins with their steer, heifer, hog or small animal at the Seminole Indian 4-H Show and Sale.

While friends and relatives encouraged them from the stands, 4-H’ers from each reservation showed determination in the ring as they displayed 52 hogs, 24 steers, 2 heifer yearlings and 19 small animals for the judges.

Seasoned 4-H’er Hunter Strickland, 15, remained busy this year raising three heifers and a steer. It was her fourth year showing heifers. Hunter showed a yearling, which she planned to breed after the show, and she showed and sold a steer.

“I enjoy it, but it’s a lot of work,” she said. “It’s expensive, but you make your money back. The steer pays for the expense of the heifers. In the end, I’ll have a herd.”

Participants in the three-year heifer program don’t sell the animals; they use them to breed their own herds. The first year, they show a yearling; the second year, a bred heifer; and the third year, a cow-calf pair.

Rodney Osceola said he believes the responsibility he learned as a 4-H’er growing up in Brighton helped prepare him for adulthood.

“The main thing is being responsible,” he said. “You have to get the animals fed. Just like you would a young child, you can’t put yourself before them. I hope that’s what some of these kids have learned.”

In addition to caring for the animals, 4-H’ers learned the business of livestock. They tracked every expense, including supplies and veterinarian visits, and then they sold the animals and pocketed the profits at the 4-H sale March 28.

Children begin the 4-H program at age 5 with small animals like chickens, rabbits, goats, puppies, piglets and calves. At age 8, they may upgrade to hogs, and by 10 the kids can raise steer.

“You get the young kids involved with small animals, and it prepares them for the next level,” said Brighton Board Rep. Larry Howard. “At the end of the day, you are teaching them the responsibility of caretaking these animals. It will serve them well in life regardless of what they do.”

“Having a pig is more work. You have to spend a lot of time with it every day,” said CeCe, 9. “That’s the most important thing, so it gets to know you.”

She raised the 240-pound hog from a piglet weighing only 36 pounds. Her efforts paid off. She placed first in her weight category.

“It’s always a pleasure to come out and see what the kids have worked on all year,” said Immokalee Board Liaison Dorothy Scheffler. “They do well and learn about hard work and the reward at the end.”