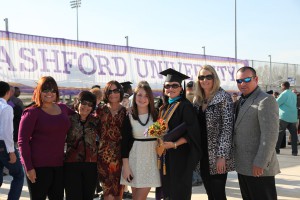 CLINTON, Iowa — Tribal Education Director Emma Johns has added to an already impressive resume of educational accomplishments, this time completing her master’s degree in public administration online from Ashford University. She walked in her graduation ceremony on Oct. 22 in Clinton, Iowa.

Family and members of her staff joined Johns at the graduation ceremony, which had the largest graduating class in Ashford’s history with more than 1,000 graduating students on hand representing 49 of the 50 states at the South Campus Athletic Complex.

“I achieved a goal I set long ago and since the day I graduated high school,” said an emotional, butterfly-filled Johns. She finished with an impressive 4.0 GPA. “I can’t talk to students and tell them to do something if I have not done it. I have to be able to walk the walk as they say.”

Formally named education director in May 2008 through Tribal Council, Johns, only 36, is no stranger as a leader for her people.

The Brighton resident has worked for the Tribe in different capacities for more than a decade (a freelance reporter for The Tribune, an education adviser, a counselor for the Family Services Department and employee with the Health Department) but most recently worked as assistant education director before finally moving up to director after Louise Gopher retired. She said she did not expect the Tribe to present her with the opportunity to accept such a pivotal position so quickly, all coming just short of her 30th birthday.

She said staying focused and keeping a positive perspective toward her job and graduation have helped her get through the tough times.

“The end results have always outweighed the bad,” she said. “There were so many times just over this past year that I wanted to quit (school), but I didn’t. I have thought to myself that I have a child (daughter Kaitlin Brown, 14) that is 100 percent dependent on me. Ultimately though, I have a creator who has given me all of these resources and support available to me to allow me to try and help make our Tribal members’ lives better.”

The journey, however, toward her most recent achievement started some years back as she attended Santa Fe College in Gainesville for two years before finishing her undergraduate studies at Florida Atlantic University with a bachelor’s degree in sociology as well as continuing education courses in student counseling while earning a certificate of completion in a women studies program.

“It has been a real struggle for her over the years,” said proud mother Carolyn Johns. “She has had to quit school and go back. Seeing her over the years, I could not be more proud of her now. We (with father Timmy Johns) have always instilled in them (Emma and other siblings) that education is the most important thing.”

Johns’ work in the education department remains tireless coming off the best turnout yet for the annual Tribal College Fair, which completed its sixth year in early October. Close to 400 Tribal and non-Tribal students from in and around Broward County attended with more than 80 Tribal departments, colleges, universities and specialty schools also on hand from across the midwest, eastern and southern U.S.

Even Johns said her struggles have turned into lessons in learning. She was once suspended while an undergraduate, losing her higher education scholarship (better known as the Billy L. Cypress scholarship) because of some bad choices. The situation forced her to pay her own college expenses for a brief time.

“Some of these kids, just like myself are going to make choices that cause them to fail, but because you have fallen doesn’t mean you should not get back up,” Johns said.

As a woman of many virtues, she also helped start the Pemayetv Emahakv Charter School in 2004 and said a doctorate degree may be on the horizon if the time and opportunity presents itself. Her interests even extend into fitness as she recently participated in a 60-mile marathon for breast cancer research in support of Breast Cancer Awareness last month.

She is also an active member of several Native groups including: the National Congress of American Indians, National Indian Education Association and Tribal Education Department National Assembly as well as a voting member and secretary of the United Southern and Eastern Tribes.