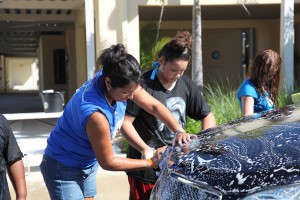 BRIGHTON — The Brighton community has come together to help one of their very own during what might possibly be the most difficult time 13-year-old Richard Harris and his family will ever have to endure.

Known for his great big smile, Harris, a sixth-grader at Pemayetv Emahakv Charter School, was diagnosed on Oct. 1 with acute myelogenous leukemia (AML).

“He was here at school and passed out and went to the hospital and it started from there,” Harris’ mother Cheryl Fish said.

Harris was immediately transferred to St. Petersburg All Children’s Hospital where he was diagnosed and began chemotherapy just four days after arriving.

The Brighton community along with the Charter School have held several benefits to raise money to help Harris’ family with medical expenses and any other expenses accrued as they travel back and forth from Brighton to St. Petersburg to be with Harris during his treatments.

“I appreciate it all,” Fish said. “It’s not something we ever expected.”

The benefits started with a rib dinner put on by the Gopher family. Dinners raised more than $3,000.

As soon as Harris was diagnosed and admitted into St. Petersburg All Children’s Hospital, faculty of the Charter School brainstormed on how they could lend support to Harris and his family.

“It was such a left field blow to our community that in the beginning we all felt so helpless,” Tribal member and Charter School Administrative Assistant Michele Thomas said. “We immediately started a Facebook page because we wanted a way for the students to keep in touch with Richard and even faculty.”

The students of the Charter School spoke up and said they wanted to hold a car wash to help raise money.

On Oct. 24, a teacher workday, students came to school on their day off to wash car after car to help their classmate and friend.

“I’ve known Richard for a lot of years and he’s my friend,” sixth-grader Sunni Bearden said. “I just wanted to help him.”

The students raised a total of $827 for Harris and his family through the car wash.

“It means so much to me and my mom and family,” Harris’ younger sister Ta-fv said. “It’s so kind of them to use their money to donate to Richard. It breaks my heart sometimes that people use all that money just on Richard but he needs it and that’s just great of them.”

Another fundraiser idea the Charter School came up with was to set up a collection for students, teachers and community members to donate to by placing money in canisters for the faculty member they wanted to see in the Culture Education’s dunk tank during the Halloween Carnival on Oct. 29.

The school collected $641 from the dunk tank benefit with Principal Brian Greseth ending up in the tank.

“It warms my heart as a community member raised in this community,” Thomas said. “It makes me very proud that we are such a giving community and that these are the types of things we can do when someone is in need.”

Students from the Charter School and community members have made cards, left messages on his Facebook page, called on the phone and even driven to St. Petersburg to visit Harris.

“It uplifts him a lot and keeps his spirits up,” Fish said. “It keeps him motivated to not let it get to him. Even just the phone calls. I handed out his number at school and the kids will call and that gets him through the days. And he’s still got that great big smile.”

Harris is expected to undergo chemotherapy treatment for six months, a total of four treatments lasting for 10 days at a time. After each treatment, Harris will take a break to let everything clear out of his system at which point he will return home for a few days.

In order to keep Harris on track and up to date scholastically, teachers Ryan and Stephanie Tedders have offered to homeschool Harris during his hospital stay.

“He was really happy about that because he didn’t want someone he didn’t know to come and start doing work with him,” Fish said. “They are going to do everything they can to keep him caught up so he can go on to the seventh grade next year.”

The Charter School as well as the community is continuing to find ways to help Harris and his family get through this tragic ordeal. An account was setup for Harris at the Harbor Community Bank in Lakeport with the nickname Richard Harris Supporters. Anyone wanting to make a donation can stop by and give the bank Cheryl Fish’s name or say Richard Harris Supporters and be able to help.

Fish said Harris is doing extremely well with his first round of chemotherapy and that so far he has had very few side effects. He recently had to cut his hair but Fish said once he decided to do it he dried his tears and started joking about it.

Fish thanks the community for all the love and support they have offered during this difficult period.

“If I didn’t have everybody around and people around to talk to I would have probably lost it,” Fish said. “I think it was kind of like an eye opener for Richard. He didn’t realize in the beginning how many lives he has touched. It’s just amazing and he knows everything that they’re doing for him and it just helps him out.”