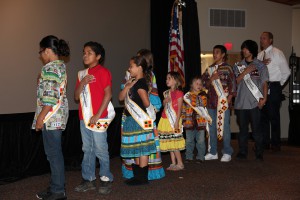 BRIGHTON — It was an emotional day for many as students of Pemayetv Emahakv Charter School thanked veterans for their service to their country during a special Veterans Day program Nov. 11 held at the Brighton Veteran’s Building.

The Charter School’s Student Council began the program by leading the audience in the Creek and American Pledges of Allegiance. Everyone continued standing for the National Anthem.

“The words ‘land of the free’ are just as true today as they were before,” Principal Brian Greseth said. “Today, it is our privilege to thank today’s veterans.”

The top three winners read their winning essays for all to hear.

Sixth-grade winner Brady Rhodes took to the podium first. Rhodes gave a very heartfelt reading about his two older brothers who currently serve in the military. His oldest brother has already served one tour of duty in Afghanistan and his other brother just deployed for basic training on Nov. 8, leaving a very emotional Rhodes.

“I am proud to say I’m from a family with lots of servicemen,” Rhodes said. “Freedom is never free.”

Carrillo’s essay focused on a story that Chairman James E. Billie shared with her about his time in the military during the 1960s.

Wrapping up the essays was eighth-grade winner Zachary Hudson who shared his thoughts from his essay, “War is an insane reality that many veterans have seen.”

Principal Greseth congratulated all students on a job well done and shared a related story from his past, causing him to become quite emotional also. Principal Greseth spoke about how his father is a retired Lt. Col. from the United States Air Force. He recalled how when he was a young boy he remembered having to say goodbye to his father for long stints at a time while having to stay with his grandparents in Minnesota.

“I know the feeling of not knowing if your family is coming back,” he said.

A moment of silence for all the servicemen unable to make it home was also held.

“Thank you for taking time out of the classroom to put on this program,” Rep. Bowers said. “I think I speak for all of us when I say thank you. The military will teach you a lot of things that will stick with you. I would encourage any one of you young folks wondering what do I do next, consider the military.”