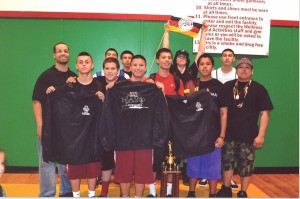 DENVER — Following a third-place finish in Lakewood, Colo., at the Amerind All-West Native American Basketball Classic and a third-place finish in the 2011 Native American Youth Organization (NAYO) tournament, the J.U.S. (Just us Seminoles) 18 and under boys’ basketball team set out to Atmore, Ala., with a first-place NAYO finish on their minds. (The teams Just Us and Seminoles recently combined to form J.U.S.)

The three opening round wins placed J.U.S. into a semifinal matchup versus Reservation ComboNation out of Cherokee, N.C. The Cherokee team jumped out to an early 6-2 lead but would never lead in the game again. Following a quick timeout, J.U.S. refocused their attention on the defensive end of the court en route to a 67-47 final score.

The championship game pitted J.U.S. against the Red Devils out of Choctaw, Miss. Once again, J.U.S.’ effort on the defensive end of the court combined with the pressure of their 2-1-2 press proved too much for the Mississippi team.

As the final horn sounded, the scoreboard read “J.U.S. 68, Red Devils 44.” In front of a large contingency of Florida fans, J.U.S. raised the first-place trophy and celebrated after being crowned 2012 NAYO champions.