TALLAHASSEE — With uncommon strength of character and painstaking dedication, Lorene Bowers Gopher helped rejuvenate and safeguard the Florida Creek language, taught hundreds of children about the old ways and completed her life’s work by handing down a rich, preserved treasure trove of tradition and culture to the next generation of Seminole Indians.

Lorene, who passed away on Aug. 4, 2014 shortly after completing the first Florida Creek dictionary, was one of three Floridians honored during the ceremony at The Museum of Florida History.

“My mother, she lived her life without thinking of awards,” Lewis Gopher told attendees after accepting the honor. “Her rewards were her kids and grandkids, seeing them graduate, seeing her granddaughter graduate from Florida State University. So she has the rewards. I want to thank the state for recognizing her. We really appreciate this.”

Since the award was instituted in 1985, the Secretary of State considers annual recommendations from the Florida Folklife Council to honor outstanding folk artists and folk culture advocates for their long-standing contributions to state folkways. The council solicits nominations from the public between June 1 and Oct. 1.

Led by Lorene’s brother Brighton Councilman Andrew J. Bowers Jr., some 30 Seminole Tribe members and members of Lorene’s immediate and extended families made the trip to the state capital to share in the ceremony.

“It was so wonderful to see so many Seminoles here at the museum today,” said Jeana Brunson, director of The Museum of Florida History. “So many were dressed in their traditional clothing. It was very, very beautiful.”

A big-screen, multimedia presentation introduced each honoree. Still photos – historical and contemporary – were mixed with film of Lorene shot by Carlton Ward Jr. and Elam Stoltzfus when Lorene hosted the Florida Wildlife Corridor expedition in 2013 at her camp on the Brighton Reservation. A letter praising Lorene from Florida State University President John Thrasher was read by his special adviser Elizabeth Hirst:

“At the university, we understand the importance of protecting and continuing the historical legacy and values upon which an institution is founded and draws its strength and direction for the future. Those who are not vigilant run the risk of losing it forever. Ms. Gopher clearly devoted herself entirely to that cause by ensuring through her selfless years of teaching that the Creek language would survive with new generations of students.

“There is no greater calling than shaping young minds. We at Florida State University are moved by our relationship with the Seminole Tribe of Florida and honored to teach our own students about its traditions, just as Ms. Gopher provided lifelong lessons to hers.”

“My mother was never one to seek out any awards. She preferred to stay in the background,” said Norman “Skeeter” Bowers. “If she were here today I guarantee she would be like, ‘What’s going on? What’s the big deal?’” 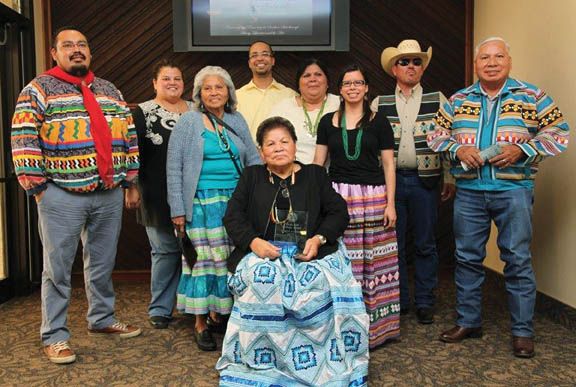