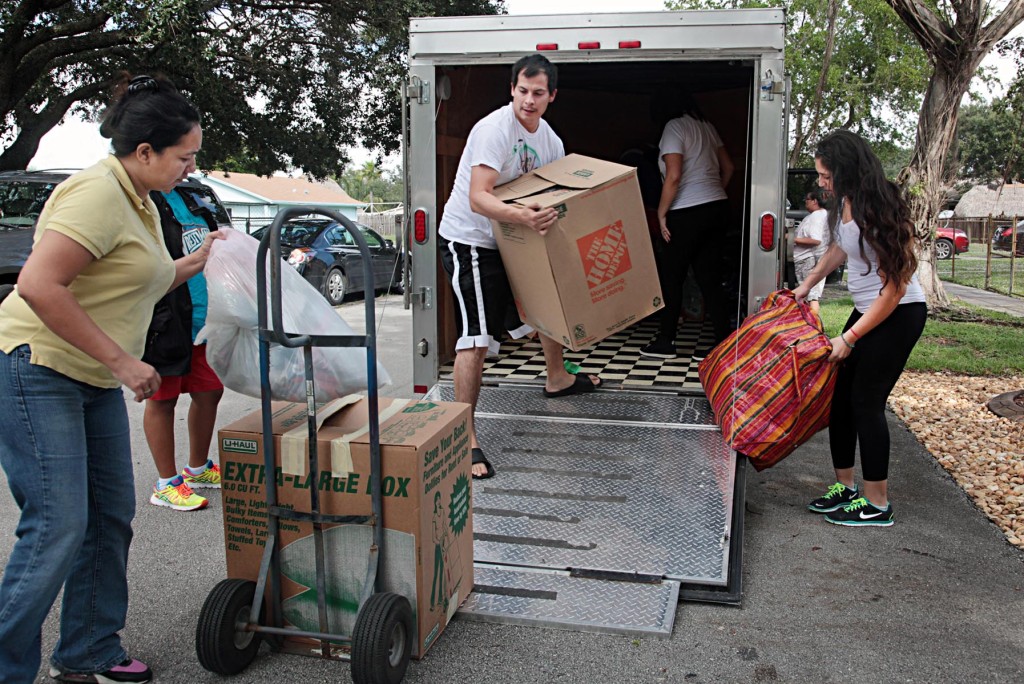 The nearly 40,000 residents of Pine Ridge endure extreme temperatures often well below zero, in addition to an 80 percent unemployment rate and crushing financial, health, housing, educational and social issues. Only 84,000 of its 2.2 million acres can sustain agriculture, and life expectancy – 48 years for men and 52 years for women – is lower than anywhere in the western hemisphere except for Haiti.

To help make a difference, Seminoles from every reservation donated items to the cause.

“We had a tremendous response from people who wanted to help out,” said Gloria Wilson, of the Native Relief Foundation. “It exceeded our expectations; we got more than we had last year.”

A couple dozen people gathered at Wilson’s home in Hollywood Nov. 23 to sort and pack donations, some of which were trucked in from Brighton and Big Cypress. Wilson’s driveway, front yard and garage overflowed with stacked bags and boxes. Volunteers made quick work of organizing the items into specific areas for shoes, clothing, blankets and linens, toys, non-perishable foods, furniture and other miscellaneous things.

“We got a lot of stuff; it was good,” said Alice Billie, Big Cypress coordinator. “We had a truck and a trailer filled with donations. We expect more people to drop stuff off here all day.”

As a child growing up in Brighton, Wilson recalled when she and her family depended on donations like this.

“The churches used to bring in clothes and put them in a big pile,” she said. “They told us to go get what we wanted. I used to go home with an armful of books.”

“She used to receive back in the day,” added Wilson’s business partner Juan Menendez. “Now she’s paying it forward.”

Last year, Bobbi “BJ” Billie, of the ABC Foundation, Pete Osceola III, of the Native Relief Foundation, and Misha Winters, a Sicangu Oyate Tribal member from the Rosebud Reservation, drove a truckload of donations to South Dakota where they delivered items to five of the reservation’s nine districts. This year, Billie and Winters will deliver to as many districts as possible, as well as a women’s shelter in Rapid City and the Wounded Knee District School.

The school, which serves an impoverished population, has 147 students.

“It’s not possible for some of these kids to have a normal life,” said Billie, who lived on Pine Ridge for 12 years. “They come back to school on Monday and look like they haven’t eaten all weekend. Their parents had parents who didn’t take care of them, so they do the same for these kids who are left to survive on their own.”

The school is trying to organize “lock-ins” to make sure students are fed and cared for during the weekends. They are also trying to purchase washing machines for the schools to encourage parents to do laundry at school while simultaneously interacting with their children and teachers.

“We are already putting our heads together to see how we can improve things for next year,” Wilson said. “A lot of people want to stay involved with us now. Our efforts will center on fundraising for the school; we want to meet as much of their needs as we can.”