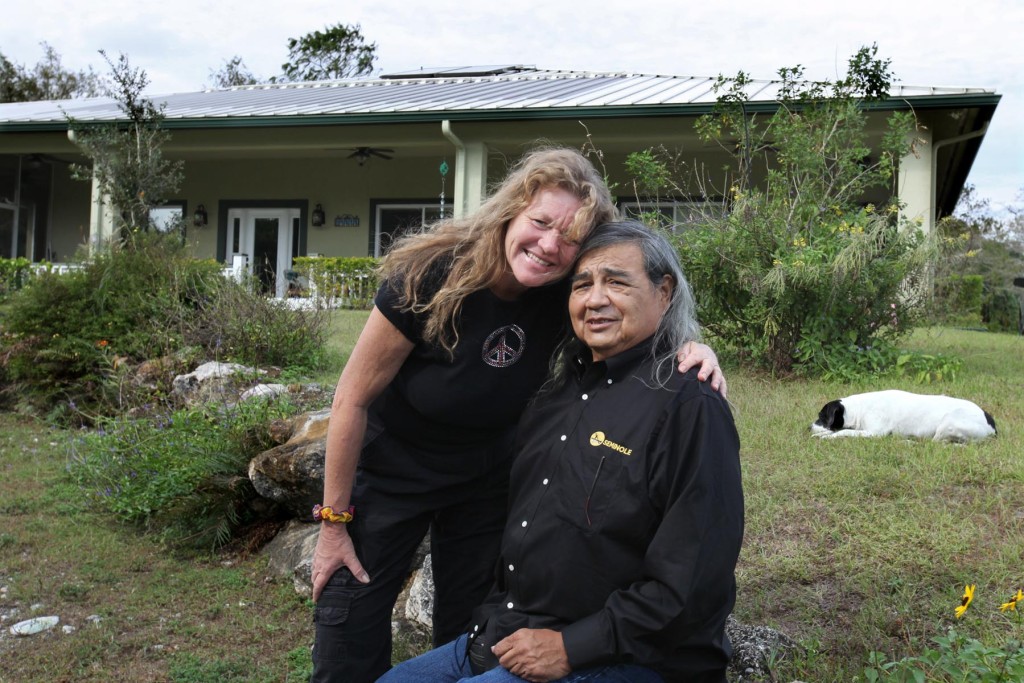 BIG CYPRESS — When an environmentally conscience couple builds their dream home, size and beauty are secondary.

“What’s important is to demonstrate that you can have a wonderful living space without having a 4,000-square-foot McMansion,” said environmental activist Rhonda Roff, the wife of Big Cypress Board Rep. Joe Frank.

And demonstrate they do. Their 2,200-square-foot home, built on an elevated lot on the Big Cypress Reservation in 2009, is the only solar powered home in the six Tribal communities – and it is available for anyone to stop by and check out, Roff said – by appointment, of course.

She said the couple had been living in a smaller, less efficient home before their family and the need for more space grew.

“Once the Tribe said OK that we could build a new home, we started working,” Roff said.

They employed a civil engineer then embarked full course on a solar energy conservation project.

Starting from scratch, the house the Roff/Frank family built is square, a shape which maximizes interior space while minimizing exterior surface area. The less exterior wall, the less thermal transfer of outside temperature to the inside conditioned space, heat in summer and cold in winter.

Instead of cinder blocks, walls are constructed with insulated concrete forms put in place and poured on the scene. Called “Greenblock,” the material can be twice as hurricane wind resistant and can cut heating and air conditioning costs by 50 percent.

In South Florida, cooling a home is more necessary than heating it so other design features of the home help lower air conditioning costs.

Roff said the family of four’s electric bill from August, typically the hottest month of the year, was a mere $121 for the four bedroom, two bathroom home.

The white, metal roof is a double plus because the white paint provides higher sun reflectiveness (requiring less cooling) and the metal, as opposed to other roofing materials, creates less emissivity, which is a measurement of radiated energy sent back into the air. The underside of the roof has a 5-inch thick coating of a spray foam insulation called Icynene. As a result, the attic never gets hot.

Further, the exterior walls are practically shielded from the sun by a roof overhang that juts about 8 feet over a wrap-around porch.

Steve Hoag, a solar engineer and the owner of All Efficient Products based in Davie, said some of the structural aspects of the Roff/Frank home are common sense features used by builders long before air conditioning and other modern appliances.

“It’s going back to basics,” Hoag said. “Solar techniques go back to the Romans, like the wrap-around porch, but we’ve lost a lot of the desire and attraction of simple things in lieu of technical gadgets. Combining solar and gadgets is a killer combination, but we should do the simple first.”

“For millennia, our people have used solar energy to provide materials for our camp (housing) needs but over the past several decades we have gone to more oil-based materials to replace our traditional ones,” Rep. Frank said. “My family’s incorporation of solar use for our house pays some respect to our ancestors’ use of solar energy.”

Hoag said it’s easier and less expensive to build from the start with solar power ability than to retrofit the home later. Retrofit costs can range from about $3,700 to $8,000, first depending on how aggressively a company prices the same job, materials and labor – and then on specific climate needs, he said. The technical makeup of a water heater, for instance, can change from a colder or warmer region.

“People can jump into the solar energy market anytime – and save a lot of trees,” Hoag said. “But don’t be at the mercy of boiler room sales. Be diligent and look for a good contractor.”

The carbon footprint of the home was also considered when purchasing all materials and hiring workers.

“That’s where we stepped into the social justice and fair trade arena. We fed the engine for local economics,” Roff said.

The couple lives by the environmentalist mantra “reduce, reuse, recycle.” Nearly everything in the house has a former life – even the vintage kitchen sink, which they purchased at a secondhand store when a family road trip passed through a tiny town in Georgia.

They bought lamps at a local thrift store. All the wood for the kitchen cabinets came from certified sustainable American forests. The living area floors are made of bamboo, the kitchen and baths of “Marmoleum,” the original formulation of linoleum which was made from the oils and fibers of the flax plant – hence the artistic mini dings and ditches that whisper character.

The bedroom windows face the east to soak in daylight. Solar tubes that spike from the roof through the attic deliver natural light in a hallway, closet and bathroom.

Near the apex of the roof, a photovoltaic system (PV) uses the sun to make electricity from one hour after the sun comes up to an hour before sundown. On a sunny day, the panels can make 15 to 30 kilowatts of power, Roff said, which is as much as they need.

Batteries are charged by the solar PV to work as a backup power source for the home when needed rather than the more commonly used fossil fuel powered generators. A backup power source is required by the Tribe, but a generator system which also cost the homeowner for installation, only kicks in during outages. The Roff/Frank’s solar power system with battery backup allows the family to save money every day.

On rainy days, when only dribbles of electricity can be produced by solar power, Glades Electric Cooperative, a non-profit customer owned corporation that provides electric service to over 15,000 members, comes in handy. Only the oven and the clothes dryer are not connected to the solar panels.

Also on the roof, is a solar water heater powered by its own dedicated PV powered pump that moves water into the panels where it is heated. The water is then saved in a 120-gallon tank, which can be heated by conventional electricity if necessary, on especially dreary days.

Hoag said homeowners with solar water heaters can testify to the advantage best after a power outage like one caused by severe weather.

“There are no switches that go off and on. It’s a matter of the sun coming out and being intense enough to heat the water. If there is a brownout or a blackout, then you still have one luxury – it is hot water,” Hoag said.

Roff said her electric bill reflects less than the average 1,100 kilowatts hours (KWH) per month per household. On the average, the house requires 980 KWH per month. About 740 KWH come in from the Glades Electric grid and 240 KWH is made via the solar power system and used in the house. Another 240 KWH is made and sent back to the grid. Therefore, the family pays for 500 KWH.

Frank said modern technology gives the family the ability to create electrical power to offset their consumption from the grid.

“We heat our water without electricity and the solar tubes allow us to light the interior space of the house without turning on a light switch during the day. Any actions we can undertake to lower our carbon footprint will help our Tribe, as well as the state and nation, achieve energy independence for our future,” he said.

Roff said she would still like to see a bigger impact.

“Every time I see a coal hour on my electric bill I feel guilty,” she said.

Still, the environmentally friendly home is a model for being gentle on nature while putting it to work. The house is surrounded by native plants, bushes and trees that are naturally drought and deluge resistant – which require no use of additional water supply, while providing a food and shelter source for all neighboring native creatures. Even the steps that lead to the elevated front porch are made of reclaimed coral culled from theFlorida bedrock.

“The house was never just about the electric bill. We want it to withstand all of the crazy Florida weather and we want the home to still be around for our daughter to use when she is grown and her grandchildren to pass to generations,” Roff said. “It does not really belong to us; it’s giving back to the Tribe already.”