VERO BEACH — As the American Heritage softball team gathered in right field before the start of the Class 6A state championship game, the players were about as loose as a team could be. They joked with each other, did little dances in a huddle and just appeared to have good ‘ol time on a sunny Saturday afternoon.

When the game started, Heritage showed no signs of nerves as they jumped out to a big lead early and cruised past Arnold High, 12-2, in five innings May 7 at Historic Dodgertown in Vero Beach.

After the final out, it was time for a major pile-on party near the pitcher’s circle. The victory marked the culmination of a 26-2 season for the girls from Plantation who overwhelmed five opponents in the state tournament by the tune of a jaw-dropping 48-3.

A year ago, right after Heritage lost the 5A title game on the same field, Ahnie practically guaranteed the Patriots would be back in the championship this season.

All Heritage did was tear through the regular season with barely a hiccup. As usual, the Patriots won district and regional titles, but in the eyes of a program that has won seven state titles — it’s state championships that determine the success of a season.

Needless to say, the team’s relaxed atmosphere near game time proved to be the right approach.

In fact, by the time Ahnie came up to bat as the No. 8 hitter in the top of the first inning, Heritage already led 5-0 thanks in part to a three-run home run from Sydney Grobman.

“We were just more aggressive. We wanted it more. Last year we were nervous,” said Ahnie, who drove a 1-2 pitch to right for an opposite field single in her first at-bat and took second base on the play.

“It felt like another game. There weren’t nerves or anything,” said Kiauna, whose diving catch on a shallow fly ball in the second inning turned out to be the defensive gem of a game.

While Kiauna flashed impressive leather in the outfield, it was her bat and legs that helped Heritage reach the title game. The previous day, Kiauna provided the spark Heritage needed in a 5-0 win against Land O’Lakes in the semifinals.

With two outs and nobody on in a scoreless game, Kiauna reached base on a bloop single in the third inning and then put her speed to use by stealing a base. A hit by Hanna Sipos brought home Kiauna with the game’s first run.

“It was a game-changer,” Ahnie said.

In the state title game, Kiauna led off the third inning with a single and scored to give Heritage an 8-0 lead. Later in the inning, Budha scored as a courtesy runner.

Heritage’s victory marked the sixth state championship at Heritage won by Ahnie and her older siblings. Her brother Andre won back-to-back state titles as a lineman for the football team and Blevyns, a senior this year, played on the second of those championship teams as a long snapper.

“It’s satisfying because we work hard for this and it’s not something that’s given,” Ahnie said.

Although Heritage will lose star pitcher Madison Canby, nearly the entire rest of the team will be back. Ahnie and Kiauna have their senior seasons to look forward to next year. They understand keeping Heritage among the state’s elite is key for those coming up through the program, including a handful of players from the Tribe.

“It’s a good look for the younger ones,” Kiauna said.

“There’s a lot of young Native kids on JV and they see us winning and it’s uplifting for them,” Ahnie said.

Budha, one of those young players who split time between JV and varsity as an eighth-grader, said she learned a lot playing on a varsity championship squad.

“The experience moving from JV up to varsity was a lot harder and it’s intense,” she said. 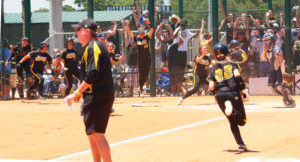 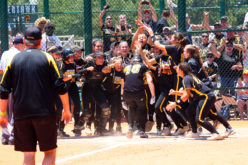 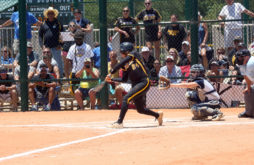 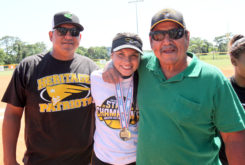