Skip to content
You are here
Home > Sports > Dash for bass: Triple Crown Fishing Series kicks off in Big Cypress 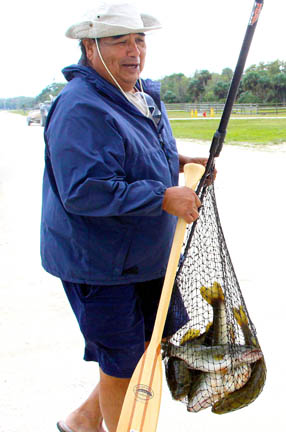 BIG CYPRESS — Inclement weather might have altered the appetites of fish, but it didn’t prevent nearly two dozen anglers from casting on the canals of Big Cypress March 7 as the Seminole Sportsman’s Triple Crown 2015 Fishing Series kicked off.

“Then it was cold and then it rained. It was hard to turn over them fish, but we got it done,” said Jumper, who placed third in the tournament with his son, Naha. The Jumpers returned with 10.99 pounds of bass.

The heaviest collection belonged to Big Cypress Board Rep. Joe Frank and Frank Marrero. They teamed up to win first place with 18.99 pounds of bass, including the day’s biggest fish, a 5.9 pounder reeled in by Marrero.

“That’s a good bass for this kind of weather,” Moses Jumper Jr. said.

“It was windy, but it was alright,” Marrero said as he released all his team’s fish back into the canal at the dock in front of Jumper’s property.

Bryan Arledge and Wayne Williams finished runners-up with 12.21 pounds. All fishermen met the 3 p.m. deadline for fish to be weighed without a penalty.

The top three teams were awarded trophies and prize money by Collins, who also presented the Seminole Sportsman’s Josiah Johns memorial plaque to Marrero for catching the largest bass. Every participant received a tournament T-shirt.

“I think we had some guys who did pretty good fishing,” Jumper told the group. He also mentioned the series would not be possible without support from Hollywood Councilman Chris Osceola.

The weather likely contributed to a lighter catch total compared to a year ago. The top three teams in last year’s tournament accounted for nearly 54 pounds, about 11 more pounds of bass than this year.

The series continues April 11 in Big Cypress with the Howard Tiger Memorial Fishing Tournament. The final event is the Take a Kid Fishing Tournament May 9. Weights from all three tournaments will be tabulated to determine the overall winner. For those who missed round one, there’s still opportunity to make up ground. Last year’s overall second and third place finishers both missed one tournament.