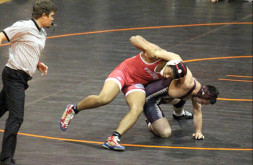 FORT GIBSON, Okla. — The momentum Sammy Micco Sanchez generated from winning a gold medal on wrestling mats in Canada last summer carried over into his high school season this winter in Oklahoma.

Sanchez, a North American Indigenous Games (NAIG) champion, finished his freshman season at Fort Gibson High School in late February with a 30-12 record and earned a spot among Class 4A’s elite in his weight division by qualifying for the Oklahoma state tournament. The Seminole Tribe of Florida member was the only freshman out of eight wrestlers in 4A’s 195-pound division at states in Oklahoma City.

Fort Gibson wrestling coach Sammy Johnson said only a handful of freshmen in school history have ever qualified for states.

“Finishing in the top eight as a freshman is really good,” said Johnson, who also coached Sanchez at NAIG.

After spending the fall as a linebacker and fullback on Fort Gibson’s football team, which went 11-1 and won a district title, Sanchez shifted to wrestling, where wins continued to pile up. Fort Gibson wrestling won its district for the first time in five years, captured its conference tournament and the Bristow Duals, finished runner-up at a tournament in Louisiana and placed fourth overall at the state championship.

It was a satisfying season for Sanchez, who’s only been wrestling for three years. This season he often wrestled up a division from his weight, which hovered around 180.

“It was a better season than I expected,” he said.

“Sammy won some big matches for us,” Johnson said. “He’s a team player and will do whatever it takes for us to be successful. He’s a tough kid. He’s done a good job.”

Sanchez won two consolation matches at regionals, including a 5-4 win that punched his ticket to the state tournament with six of his teammates. A loss would have meant the end of his season.

Sanchez’s reward for reaching states was a first-round bout against Tuttle High School senior Dustin Mason, a two-time state champion and the division’s No. 1 seed.

“I was expecting to get pinned in the first period,” Sanchez said.

But the low-scoring bout turned out to be close and lasted into the third period before Mason notched a pin.

“I was down and I got caught under,” Sanchez said.

Sanchez’s season ended with a loss in the consolation bracket, but the setbacks didn’t dampen his coach’s outlook for a freshman who has one state championship tournament under his belt and three more years on the mats at Fort Gibson.

“That’s the best part of it. The sky is the limit for him,” Johnson said. “Hopefully, he’s a little more confident. He doesn’t believe in himself as much as I do at times.”

“Next year I hope to place at state, and I hope to be a three-time state placer by the time I graduate,” Sanchez said.

Sanchez will return to the football field for spring practice. Johnson, who is the team’s defensive line coach, said Sanchez could become a full-time starter this fall.

“He’s a real athletic kid. He can play anything in the front seven,” Johnson said.

Sanchez’s brother, Jesse, a sophomore at Fort Gibson who won a silver medal at NAIG, didn’t wrestle this season due to a football injury, but he is running track and field this spring and continuing to prepare for his junior seasons in football and wrestling.

“He’s lifting. He’ll be back next year,” Johnson said.

Wrestling will still be a big part of the coming months for the Sanchez brothers, who were scheduled to compete in March at a non-high school tournament in Virginia with their younger relative Julius Aquino.