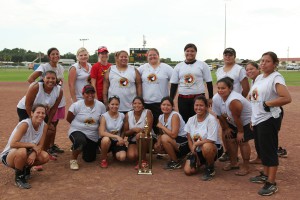 NASA brings together six Tribes from along the eastern part of the country including the Seminole Tribe of Florida, the Seneca Indians from New York, the Choctaw from Mississippi, the Poarch Creek Indians from Alabama, the Coushatta Tribe from Louisiana and the Cherokee Indians from North Carolina.

The NASA softball tournament takes place each year on the second weekend of August with a different Tribe hosting every year.

“This year it is was the Seminole’s turn to host the tournament,” said Brighton Recreation Director Richard Osceola. “Years before it was held in Hollywood but last year at the board meeting I requested that we have it here.”

With a brand-new facility, the Brighton community eagerly and willingly hosted the event.

“I’m continually amazed at the progress of the Seminoles,” Poarch Creek Councilman Eddie Tulles said. “Everybody knows the Seminoles make a world of money, but if someone would come to this community, [he or she would] see how much they put back into the community. No ballplayer dreads coming to Seminole Country.”

Teams came by chartered buses and carloads to Brighton to compete in the annual tournament.

One of the Seminole Tribe’s men teams, Hayla Boyz, started off strong, winning their first game 8-6 against the Skins. They continued winning, beating the Poarch Red Stix 15-12.

Seminole Heat however didn’t have the same luck. With tough competition they were immediately dropped into the loser’s bracket fighting to stay in.

“There’s hard rivalry but some of these guys will be out eating dinner together; that’s one of the beautiful things about it,” Tulles said.

In the women’s division, the Lady Seminoles won its first three games before being sent into the loser’s bracket only to bounce back and make it into the finals.

Immokalee Recreation struggled being the first women’s team to compete, losing 14-4 to the Natives.

In the Legends Division 40 and older, the men and women had some tough competition. The Brighton Seminoles played all the way to the top taking first place as the women’s legend team Lady Seminoles had to fight a little harder, coming in third.

With the event being held in Brighton the atmosphere was a little bit different than it was in the past years.

“In Hollywood it’s different because everything is on top of you,” said Joe Collins of the Hollywood Recreation Department. “But here everything is so laid back. Everyone’s kind of isolated, so they can’t just run off.”

The competition remained fierce up until the final day, but looking out among the crowd, one would never know. The different Tribes took the opportunity to mingle and catch up with old friends from other parts of Indian Country.

“We compete against each other every year, so the friendship’s always there,” Osceola said. “It’s always good to see everybody coming together, so it’s always fun.”

Next year’s NASA tournament will be hosted by the Coushatta Tribe in Louisiana.