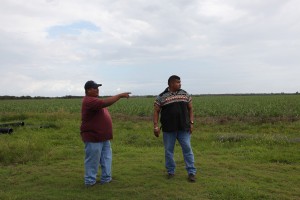 BRIGHTON — Since taking office in June, Brighton Board Rep. Larry Howard has looked to expand the Seminole Tribe of Florida’s revenue beyond gaming and has turned to the reservation’s land to do so.

With the support of the Board of Directors, he has revamped the citrus groves and sugarcane fields and reinstated shell pit operations. In addition, he has made improvements to the reservation’s cattle operations.

Rep. Howard said he hopes they can stay on this path for the betterment of the Tribe and for the shareholders of the Seminole Tribe of Florida, Inc.

“I enjoy what I do each and every day,” he said. “At the end of the day, it’s all about the people of my community and the shareholders of our Tribe. I just what to say thank you all for the opportunity to represent the Brighton community and the Seminole Tribe of Florida.”

The Seminole Tribe established the Brighton Citrus Grove in 1984 with 40 acres of land. Now, the Brighton Reservation houses more than 400 acres of citrus on two groves: the Flowing Well Grove and the Stone Beads Grove. Although originally intended to be a project for community use only, the groves – and the Seminole Pride Orange Juice label – have recently reached international markets.

Director of Citrus Operations Joe Tillman said the state of the groves reached nowhere close to potential before Rep. Howard took office. During the last 10 months, Tillman and his crew have worked diligently under the direction of Rep. Howard to remove and replace dead trees, clear vines and perform fertilizing and pruning. Their goal is to turn a profit from the citrus operations for the first time.

“Because of the Board’s willingness to stay in agriculture, we are here today,” said Tillman, who has 45 years of experience in the citrus business. “Big things are happening. That’s why we’re working as hard as we are.”

Seminole Pride Orange Juice is 100 percent natural with no preservatives and is sold throughout the Seminole Tribe. Hard Rock Hollywood and Hard Rock Tampa each receive 1,500 gallons of Seminole Pride Orange Juice a month, Tillman said. In addition, the Coconut Creek, Immokalee and Brighton Casinos receive 240 gallons of juice a month, and locations such as the senior centers and schools in both Big Cypress and Brighton sell the product.

The Tribe’s ambitions went beyond borders this fall.

In November, the Tribe shipped Seminole Pride to Santiago, Chile, taking its product international. Since then, they have shipped around 8,000 gallons of orange juice to Latin America. Tillman has further desires to expand citrus operations to other Tribes across the country.

The Tribe also hopes to qualify for lucrative government set-aside contracts with the Department of Defense and the Bureau of Indians. Government agencies must contract 20 percent of all food services to minority businesses, and the Tribe wants those contracts. Tillman is working to have Seminole Pride certified as a minority supplier to make it happen.

Confident in their product, Tillman believes this is only the beginning for Seminole Pride.

“We’re second to none,” Tillman said. “We’ll beat anyone in a taste test.”

James Tommie has had a hand in Brighton’s sugarcane operations since day one – almost 16 years ago.

Although the sugarcane fields hit a low point during the last several years, Tommie took the fields from desolate to flourishing since Rep. Howard pushed to make them operational again.

“The way sugar prices are these days, it’s a venture that never should have went under,” Tommie said. “Prices are going up.”

Tommie and his two-man crew planted 712 acres of sugarcane in October. They planted three varieties of cane because of the fact that soil changes across the farm require different types of plants.

Prior to planting, Tommie cleared the land of brush and trees and prepared the soil in order for the sugarcane to do well, he said.

If they keep the sugarcane in good condition, the Board stands to make a large profit, Tommie said.

When Tommie began preparing the land for the new crop, he and his crew harvested 203 acres of sugarcane that remained from a previous planting. With the old crop, they pulled in $138,000.

When they harvest the remaining 712 acres of sugarcane, Tommie projects a net profit of about $1 million dollars.

The Tribe sells its sugarcane to U.S. Sugar, an agricultural and food manufacturing company with a 300,000-square-foot facility that processes, packages and warehouses the crop, taking it from the sugarcane to the crystallized sugar available in stores.

Tommie will harvest the first of the sugarcane in December.

“I’ve never seen the plants look this good on the farm,” Tommie said. “If you do the cane right, it will do right by you. We’re in the neighborhood of doing real good.”

Like the citrus and sugarcane operations, Rep. Howard saw revenue-generating potential in Brighton’s shell pit. The purpose of the operation is to produce material from the earth for the pavement of both reservation and federal roads.

Marvin Bowers oversees the operation, which employs seven people and utilizes six machines. Bowers worked for the shell pit for 12 years before it became non-operational. Since his return, he has worked to make the process more efficient.

Bowers and his crew have 250 acres of land at their disposal.

They already stripped the overburden (trees, brush, etc.) off of 10 acres to get down to the dirt material needed for their product. At that point, they run the material through machines that sift out large rocks and sand, Bowers said.

About 300-400 tons of earth move through the machines each day; once separated, it is ready for purchase. Their ultimate goal is to have the material – and the pit itself – certified by the Department of Transportation for use on federal projects.

“This could be one of the most profitable (ventures) for the Tribe,” Bowers said. “Everything that comes out of the ground gets used.”

The shell pit serves multiple purposes. They not only sell the finished product to clients, but they also use the top soil removed by the machines through sifting for house pads on the reservation.

Bowers said the next step is securing more clients to purchase their material, such as the Department of Transportation, the Army Corps of Engineers and local governments.

“We’re on pace,” Bowers said. “It’s a little challenging, but I am up for the challenge.”

Ranching is a way of life for Alex Johns, who oversees Brighton’s cattle operations. He and his team of cowboys wake up at 4 a.m. to take care of the reservation’s 5,000 cows.

They’re currently working to make the operation more lucrative for the Tribe.

About four years ago, the cattle department made the decision to produce all-natural beef; they no longer use hormones or antibiotics, and they raise their cattle on an open range.

The result, Johns said, is better quality meat that will sell for more money on the market. They can pull in $50 more a head and $2 a pound for all-natural beef compared to only $1.00-$1.10 a pound for beef pumped with hormones.

For several years, the Tribe has been shipping its beef to Texas and Kansas as well as the European Union, Korea and Japan. They are ambitious to continue reaching new markets.

“Our cattle is ready to go anywhere in the world right now,” Johns said. “These calves will bring in more money than they ever have.”

Johns commends the Tribe’s Choice quality-grade USDA beef and said they hope to advance to the highest grade, Prime.

In addition, they are seeking to become a verified green ranch for the way they treat the land and are looking into using solar energy to pump water for cattle, Johns said.

“This is part of our heritage,” Johns said. “It’s a way of life we get accustomed to. We’re just trying to raise the best-quality beef we can because we believe in it.”

Rep. Howard said he will continue working closely with the Board to expand operations and pursue new ventures. The additional business will only help the Tribe and its members by supplementing its gaming revenue.

“This is going to make everything better for the shareholders of our Tribe,” he said.