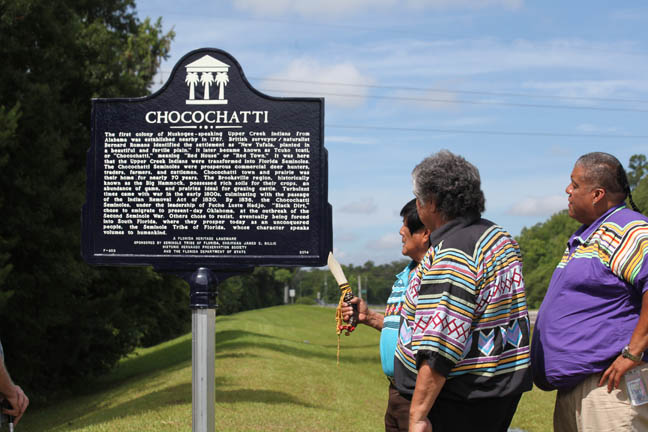 BIG HAMMOCK, Fla. — Nine years before the Declaration of Independence was signed, a displaced group of Muscogee-speaking Upper Creek Indians established a colony in the rolling woodlands, lush lakes and fertile prairies just outside present-day Brooksville, located north of Tampa.

A British surveyor called the settlement New Yufala, borrowing the name of the area in Alabama from which he believed the Indians hailed. The Creeks preferred to call their new home Tcuko tcati or Chocochatti, which means red house or red town.

The group of about 75 stood under the blazing sun on the side of State Road 50 just east of Emerson Road, not far from the original colony site, to hear brief remarks from Chairman Billie, Backhouse, Yeager and local historian Doug Davis.

Weisman gave a keynote speech. Tribal medicine man Bobby Henry provided the invocation. All agreed that the significance of the place is remarkable.

In the early days of Chocochatti, and for about the next 70 years until pressure from the U.S. government forced the Creek Seminoles to Oklahoma, Chocochatti was a prosperous, self-sustaining Native community of deer hunters, traders, farmers and cattlemen.

In fact, during those seven decades, in the halls of Washington and Tallahassee especially, Chocochatti was considered the seat of the Seminole Nation.

A report by the Pasco County Historical Preservation Society detailed a visit to Chocochatti by Horatio Dexter, who had been employed by Territorial Gov. William P. Duval to inform the Indians of an upcoming council at Moultrie Creek.

At the time of his visit Dexter reported that “Chocochattee Town” consisted of about 20 homes with 65 resident Indians under Sinaha, who was leading as the town chief. The chief owned three slaves, 160 head of cattle, 90 horses and a “gang of hogs.”

When the Indians left, however, the historic community seemed to vanish into the past.

During the recent dedication, Chocochatti was restored to its well-documented and well-earned place in history.

The Florida Heritage Landmark roadside marker was sponsored by the Seminole Tribe of Florida, Historic Hernando Preservation Society and the Florida Department of State. It joins two other recent Seminole markers – Red Barn on Brighton Reservation and Council Oak on Hollywood Reservation – and more than 750 historical markers statewide.

“Historical markers are not planted by the hand of God, nor do they result from federal mandate. They spring forth from grassroots community action to become a tangible part of public history and a community’s legacy of how it sees itself,” Weisman said.