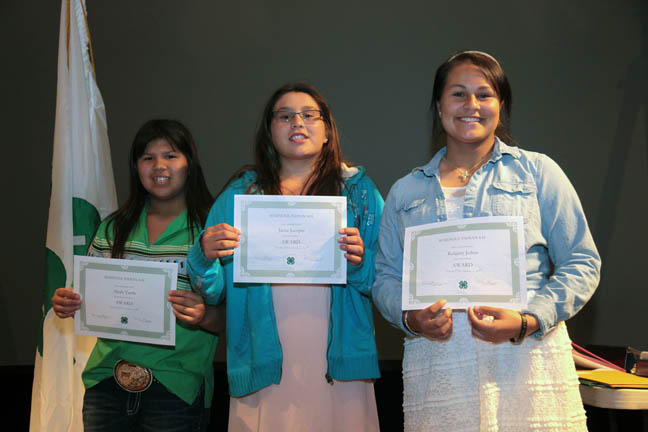 The 114 kids who participated in the Tribe’s 4-H program during the past 12 months were congratulated for jobs well done at  banquets in Immokalee, Hollywood and Brighton May 30, 31 and June 2. The youngsters were rewarded for their efforts with awards, praise and support from family and friends.

“They all did an excellent job,” said Polly Hayes, 4-H coordinator. “We used to have a lot of animals not make weight, but we had just a few this year.”

Hayes emphasized the importance of all the volunteers who helped make the program a success on each reservation.

“Parents are teaching kids to do the right thing,” Brighton Board Rep. Larry Howard said. “4-H teaches discipline, keeps them off the streets and out of trouble.”

The highlight of the year was the 28th annual Seminole Indian 4-H Swine, Heifer and Steer Show and Sale in Brighton March 28-29, where 98 children showed and sold 79 hogs and 16 steers. Thirty-four small animals and five heifer projects were also shown.

Beginning at age 4, kids may join the small animal club and progress through the hog, heifer and steer programs until they are 18.

“I love showing in front of people and being able to raise my animal and watch it grow,” said Deliah Carrillo, 16, who earned special recognition for raising the largest steer in the show.

Recordkeeping, which teaches discipline and math, is a main component of the program. First year 4-H’er Taden Santiago, 10, earned the Junior Record Book award for the quality of his records.

“It was hard to write all the stuff down,” Taden said. “But I know I did this much to keep my hog alive, care for him and hoped to make him a grand champion. I’m proud of myself.”

Kids learned life lessons and practical skills throughout the year.

“I learned responsibility and to take care of things I start,” said Kalgary Johns, 16, an eight-year veteran. “The hardest part is breaking steers and getting them to lead on a rope. I get to make new friendships. It’s been fun. I’m happy with everything I’ve accomplished.”

Many 4-H’ers plan to get involved in the cattle business when old enough. Four-year 4-H participant Cyrus Smedley wants to spend his life in the cattle industry.

“I do this to build up my own herd,” said Smedley, 15, who has cows and calves in the heifer project. “You have to make sure you feed and water your animals or they will die. You have to spend time with them.”

Youth will take a break from livestock until the steers arrive in July. Those who want to participate in the steer or heifer project should contact cattle owners now to get one. The shipping schedule is July 7-12 in Brighton and July 14-17 in Big Cypress.

The first enrollment meeting will be held in September, and kids raising hogs will receive them in December.