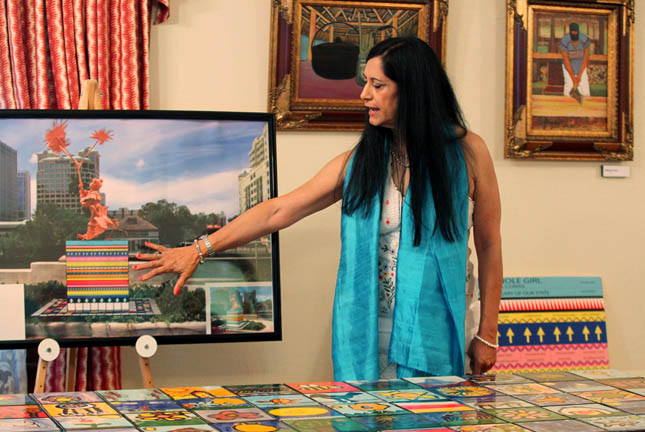 FORT LAUDERDALE — Excitement had been building among artists for months about a Seminole sculpture whose future home will be along the New River in Fort Lauderdale. But completion of the statue by sculptor Nilda Comas, with assistance from Elgin Jumper and endorsed with $50,000 from the Seminole Tribe, hinged on selling 500 ceramic tiles for $100 each to meet costs and to decorate the work’s pedestal in patchwork designs.

Thanks to a $40,000 gift from philanthropist AJ Acker, the tile goal has been met. Acker made the donation during a Venetian Arts Society art salon and fundraiser June 5 at the Fort Lauderdale Historical Society’s New River Inn.

“I like people and I don’t have a family, so for me, supporting the campaign is like leaving a legacy,” said Acker, a world traveling photographer, part owner of Sleepy’s bedding company and a South Florida resident for 40 years.

Comas, owner of Legacy Art Studio in Fort Lauderdale whose works pepper cities worldwide, said Acker simply asked during a recent visit how many tiles were left to be sold.

The piece titled “Florida – A Seminole Girl” will be a life-size bronze of a 5-year-old dressed in traditional attire circa 1910 who is happily prancing at play with palm fronds in her hand and creatures at her feet.

“The statue will bring the Seminole presence back to the downtown Fort Lauderdale area where we have been missing for decades. It’s a good thing,” said Jumper, a Seminole painter and poet who is also a student of Comas.

At the foot of the statue, 76 tiles already painted by Ahfachkee School students ages 5, 6 and 7 will hug the base. The tiles portray everyday scenes of the Everglades as seen by Seminole students, including native birds, fish, turtles, chickees, horses and peaceful vistas.

An auditory element will include the sounds of Seminole children singing in Mikasuki. In the background, viewers will also hear birds, water and rustling leaves – all sounds of the Everglades.

The city of Fort Lauderdale donated space at Stranahan Landing along the New River across from Stranahan House, the historic home of Frank and Ivy Stranahan, who were Fort Lauderdale settlers and friends of the Seminoles.

Ivy was the city’s first public school teacher. After she married Frank and left public teaching, she turned her attention to educating local Seminole children. She established the Friends of the Seminoles foundation. Frank owned a trading post where Seminoles came to do business. Many times, Seminole families camped on the Stranahan homestead.

Willie Riddle, director of the Venetian Arts Society, said the art salon was held to celebrate the group’s Seminole Indian Month at the venue decorated with a dozen paintings by Jumper.

“We gathered to celebrate the art of the Seminole. That’s what we do – we celebrate many cultures in intimate ways through art salon,” Riddle said.

Jumper and Seminole traditional flutist Gordon “Ollie” Wareham presented a performance art show that infused a soliloquy by Jumper, music by Wareham and the live creation of a stark charcoal drawing by Jumper. Larry Mike Osceola, who has since become the first Seminole appointed to the Broward County Historical Commission, displayed pieces from his private collection of Seminole dolls, wood carvings and patchwork.

Jimmy Osceola, the first Seminole artist to befriend Comas and another of her students, also attended.

“It’s unbelievable that it all started with a knock on Nilda’s studio door about a year ago,” Jimmy Osceola said.

Riddle credited the contemporary Seminole artists for bringing long overdue attention to the lack of Seminole presence in Fort Lauderdale.

“The Seminole people have not been given their full place in the area, yet they are one of the most critical aspects to the entire culture of the community,” he said. “Here, we have contemporary artists doing what ancestors have done for centuries, but they are doing it with 20th-century flair.”

Comas said “Florida – A Seminole Girl” will likely be unveiled in November.