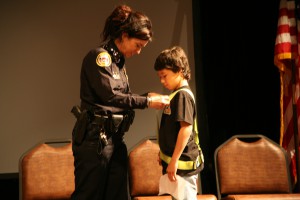 BRIGHTON — On Nov. 12, Pemayetv Emahakv Charter School took the morning out of the classroom to hold a special ceremony to honor and thank all veterans at the Brighton Veteran’s Building.

Principal Brian Greseth explained the meaning of Veterans Day – to thank and honor all those who served honorably in the military during wartime or peacetime. Veterans Day is intended to thank veterans for their service and to acknowledge their contributions to the country’s national security. The holiday underscores the fact that all those who served – not only those who died – made irrefutable sacrifices.

PECS’ Student Council began the program by reciting the Pledge of Allegiance in Creek and English followed by the national anthem.

Teacher Heather Dobbs’ fifth-grade class continued the program by performing the Preamble to the Constitution of the United States. The fourth-graders followed, singing God Bless America in their Creek language.

Students Aiden Tommie, Sunni Bearden and Odessa King read essays they wrote on the topics, What’s Veterans Day mean to us? and, Why should we honor our veterans?

A moment of silence for all fallen servicemen was also held.

In a joint ceremony that also celebrated PECS’ Safety Patrol, everyone witnessed the new inductees take the oath of office.

PECS’ Resource Officer Darryl Allen explained the requirements to be chosen as a Safety Patrol member. Student have to be fourth-, fifth- or sixth-graders. They are chosen by their teachers, have to maintain an overall grade of a “C” average and have to be role models. They also have to maintain satisfactory behavior and have to perform their Safety Patrol duties promptly.

One by one, 20 students were inducted as Safety Patrol members. Each was given a pin; then, they recited the PECS’ Safety Patrol pledge together.

Lt. Lisa Bennis, of the Seminole Police Department, swore the youth in by having them raise their right hand and recite the oath.

Brighton Councilman Andrew J. Bowers Jr. said to the new Safety Patrol members, “I think our future is safe, and by what I’ve seen here today, our leadership potential is in good hands.”

In closing the ceremony, PECS’ Safety Patrol, along with the present veterans, formed a receiving line for all students, teachers and parents to shake their hands to honor and thank them for their service.