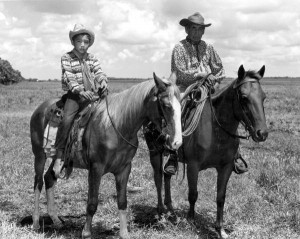 BRIGHTON — This year, the annual Brighton Field Day Rodeo was designated a memorial to honor Tribal icon Fred Smith for his contributions to the Seminole Tribe, his country, his community and his family from Feb. 3-4.

A proud statesman, lifelong cattleman, tough politician, historical pioneer and compassionate steward to his people and Florida neighbors, Smith gave a lifetime of service to his fellow man.

Born into the Bird Clan on the Brighton Seminole Indian Reservation on Aug. 16, 1939, he was the son of Jack Smith Sr. and Leona Micco Smith.

Growing up in Brighton, Smith became a cowboy at an early age. He rode in the shadow of his grandfather, Charlie Micco, one of the founders of the Seminole cattle industry, from the time he was old enough to set a saddle.

He learned from the ground up about the hard work and determination required to bring a herd to market and carried those work ethics into his career.

Smith served his country overseas in the U. S. Army and returned home with a strong desire to improve conditions for his people.

Despite the fact that they had recently adopted a constitution and established a Tribal government, the Seminoles suffered from poverty, social injustice, poor health and educational programs and a lack of economic opportunities while attempting to subsist on government and tourist handouts.

Determined to improve his Tribe’s fortunes, he dove into government work, rising to become, first, the Brighton Representative, and, later, the Tribal Secretary/Treasurer.

He became known across Indian Country for his business acumen and success in diversifying the new Tribal gaming monies into citrus, cattle, cigarettes and other business pursuits.

He was in high demand as a consultant and speaker to other American Indian Tribes who wished to emulate his business success.

From his office and from his cattle pasture, Smith modernized the Seminole cattle industry.

He pioneered video auctions and group sales, made sure the Tribe had a voice in the Florida Cattlemen’s Association, lobbied for cattlemen in Tallahassee and Washington, D.C., served as vice president of the Intertribal Agricultural Council and played a major role in making the Seminole Tribe the nation’s third largest calve producer, a distinction they carry to this day.

“Despite the fact that there were demands on his time 24 hours a day, my dad never lost sight of his roots or responsibility to his family,” Camellia Smith Osceola said.

“He was there to put me on my first horse and held my hand as I met the daily challenges of growing up and eventually accepting the responsibilities of raising my own family.

“Even then, he never let go and became a strong influence on my son, Jarrid, whom I consider one of his achievements. He is my hero, and I will always remember him with his hat and boots on.”

Rodeo was in Smith’s blood, and he knew the rewards of creating opportunities for wholesome activities that encompassed entire families.

Partnering with his good friend Josiah Johns, who was an avid sportsman and athlete, he was influential in the creation of the rodeo arena in Brighton and was a strong advocate of the annual Brighton Field Day events. Together, they encouraged youth involvement and sponsorship in building a rodeo athletic program.

Johns passed away in 1983, but Smith kept their rodeo relationship alive and continued to sponsor the sport derived from the cattle industry, which has become a part of the Seminole culture.

Shortly after Smith’s passing on Sept. 4, 1996, the rodeo complex in Brighton was named the Fred Smith Rodeo Arena in his honor.

Friends describe Smith as a quiet and soft-spoken man who was tough and could intimidate others in backroom politics and deal making.

His Indian name means “The One Who Holds the Heart.” Most of his life was spent in service to the Seminole people, holding and protecting the heart of the Seminole Nation.

From the cattle pastures to the boardrooms, Smith improved the world and made life better for the Seminole Tribe of Florida.

Peter B. Gallagher contributed to this article.