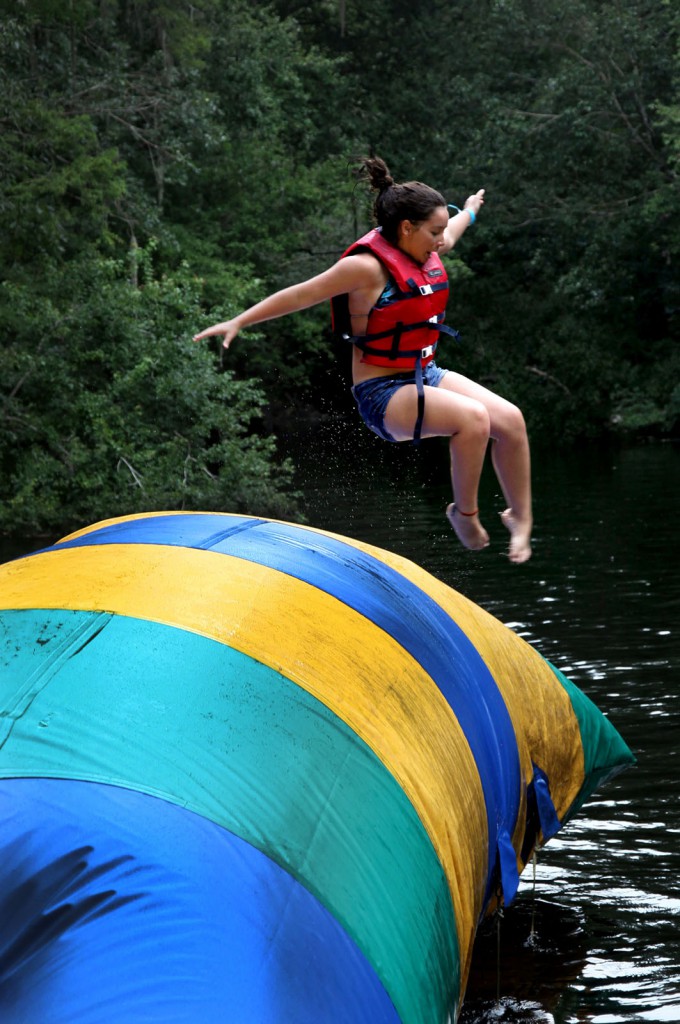 HIGH SPRINGS, Fla. — Every single second from dawn until deep into the starry night was filled with fun, adventure and learning for about 235 Tribal children at Camp Kulaqua sleepaway summer camp.

Nearly 80 teens participated in the first week, July 28 through Aug. 1, at the camp in High Springs, just north of Gainesville.  The youth camp, held the following week for ages 7-12, was attended by 134 kids.

“Everything we need is there. The place supports everything we want to do and more,” said Helene Buster, director of the Tribe’s Family Services Department who led the annual event for the 10th consecutive year.

Most campers felt right at home with friends, school classmates and family members.

“The best part was floating down (Ichetucknee River) with my cousins,” said Destiny Diaz, 11, of Hollywood.

Some campers made new friends, like Mocha, a 600-pound black bear who one camper renamed “Curtis,” and Poncho, a 13-year-old clownish Capuchin monkey who entertained spectators with goofy antics during a walk through the zoo.

For instance, all age groups swam, played sports, tubed down the Ichetucknee and performed in a talent show. But when it came to health workshops, the teens also learned about the dangers of sexually transmitted diseases. And both groups attended a class about money management and then did good works for pay that could be used for shopping later; the teen transactions were made via checking account while the children were paid in toy paper dollars.

“It’s about health and well-being and becoming well-balanced adults,” Ray said. “One objective is for the campers to practice what they learn in a venue where they can have a lot of fun doing it.”

Dozens of the Tribe’s police officers, firefighters, educators, nutrition experts, health care professionals and Culture teachers devoted three or more weeks preparing for the camp and then serving as counselors and support staff.

Every evening after dinner, children and teens created traditional crafts under the direction of Culture teachers, including Vinson Osceola, of Big Cypress, who taught the boys canoe carving and chickee-thatching techniques.

Buster said the camp has grown over the years. The first summer provided only one week of camp for all age groups and only for children from Big Cypress and Immokalee. The two groups this year had more participants than ever from every Seminole reservation and community.

“It’s probably getting more popular because of word of mouth, but I’m not really sure,” Buster said. “What we do know is that kids have a great time and then they tell all their friends.”

Hilarious, laugh-filled events were held daily. The teens’ Wacky Seminole Camp Sports Wednesday was highlighted by a “build a snowman” event that employed massive amounts of shaving cream and a handful of willing victims.

Teamwork and respect were recurring lessons in all activities – whether building a box car for zany racing or taking directions blindfolded through the gym during a “walk of trust” exercise.

Sidney Nunez, 17, camped for the fifth consecutive year but for the first time as a junior counselor. The Immokalee High School student said all her six brothers and sisters have also attended.

“Camp helps kids grow. It teaches us how to manage money and how the Education Department is always there all the way through college,” Nunez said. “This year I started working the minute I stepped off the bus and I didn’t stop until the second I got back on the bus – but it was all the fun I expected.”

For Javian Cypress, 9, the most fun came from spying flying fish, sunbathing turtles and a huge manatee resting on the bottom of the grassy, sun-dappled Ichetucknee.

But camp wasn’t all fun and games. Morning activities on the last day included a final exam that tested the children’s knowledge about the serious issues learned in camp: drug abuse, money management and character judgment.

“When someone breaks a promise after you believed in them, it’s hard to get the promise back,” Cypress said. “We have to always try to be trustworthy people.”