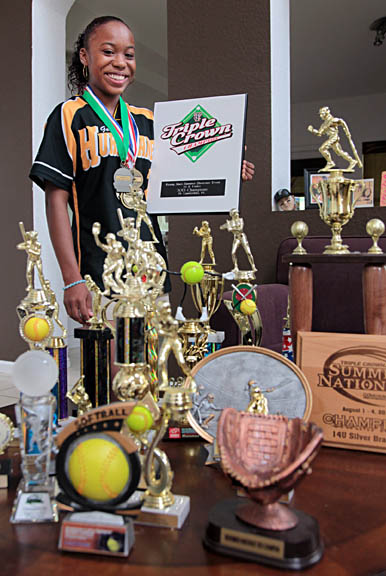 PLANTATION — Kiauna Martin knows how it feels to be a champion; at 14 years old, she has already been one twice.

Martin and her fastpitch softball team, the Gold Coast Hurricanes, won the Triple Crown Sports Summer National tournament, 14U division, in August at Myrtle Beach, S.C. The final game of the tournament was played against the South Carolina Lightning; the Hurricanes won 9-1. Based in Plantation, the team also won the championship title last year in the 12U division.

“I enjoy the sport and I have fun,” said Martin, who plays multiple positions on the field. “Playing in the tournament was nerve-racking. I felt like I had to be perfect or I’d let the team down. I tried to calm down and then we all bonded together and stopped worrying. We just played how we played and we won.”

A versatile player, Martin started playing T-ball at 5 and took to the sport. Although she has tried other sports, including volleyball, her passion resides with softball. She also plays for her school team at American Heritage School.

“Kiauna adds a lot of strength, power and quickness to the team,” said Jorge Rodriguez, coach of the Gold Coast Hurricanes. “She can play anywhere in the field; her attitude and speed are major factors. She’s very positive even when things are down – she overcomes issues and keeps her head up. I admire that about her.”

Watching her mother, Sara Jumper, play softball inspired Martin to try the sport – it looked like fun to her. She tried it, liked it and excels at it now. Some players on the team have played together for a few years, including playing on the Seminole travel team. Martin is the only Tribal member on the team now, but the relationships between the girls have grown strong.

“We’re close and we have a good time on and off the field,” said Martin, a ninth-grader. “If there’s ever a problem, we just get together and work it out.”

Martin also excels at school. Her favorite subjects are math and science. Between softball, homework and family life, she finds time to go to the Hollywood Gym where she is giving volleyball another try by playing in the Monday evening coed league.

Although it’s unusual not to have a favorite position on the field, Martin is confident and athletic and plans to continue playing softball wherever she is needed on the field.