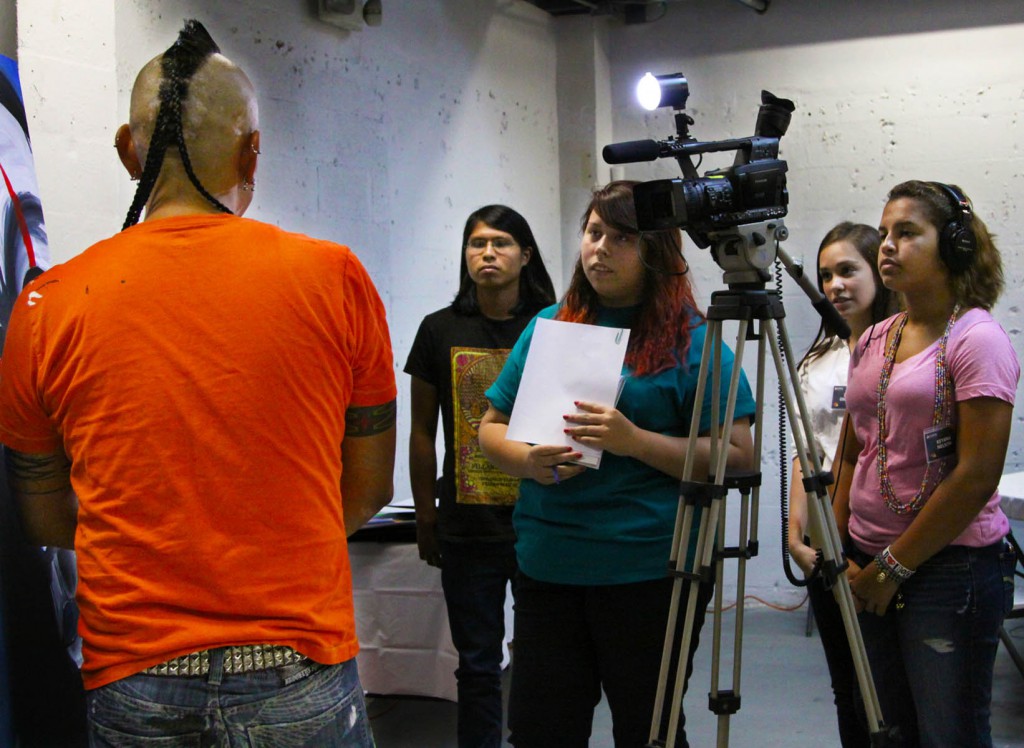 By Elizabeth Osceola and Royce Osceola

HOLLYWOOD — Ten Tribal youth united at the seventh annual Seminole Media Productions Workshop (SMPW)  to test their skills in journalism, graphic design, broadcasting and technical production. During the four-day workshop held July 23-26, students had the opportunity to listen to a motivational speech and watch a live art performance given by Bunky Echo-Hawk, a world-renowned Native American artist.

Started in 2007 by then-SMP director Danny Jumper, the event aimed to introduce youth to the possibilities of a career in communications. Frank said workshops in the past were classroom settings, while this year was more hands-on.

“We hope to give an educational experience that they’ll enjoy,” she said.

For the first time in the workshop’s history, students had the opportunity to focus on technical production. In this area, students learned the ins and outs of audio, lighting, video, event coordination and all the elements needed to produce  an event.

On the journalism side, students learned the basics of reporting and were introduced to interviewing, editing and photography, while broadcasting students learned the same techniques for a different medium. The students’ work is featured in The Tribune and on the Seminole Channel.

Tori Osceola, 14, who participated in broadcasting for the third year, said the workshop gave her an opportunity to learn more about film production, including lighting, camera and sound. Osceola plans to pursue a career as a television producer or as an on-air personality.

“I keep learning more and more each year,” Osceola said.

Bunky Echo-Hawk was invited to perform for the entire Tribal community at the Hollywood Gym. In preparation for the event, students in the graphic design program created banners and fliers to promote the show.

Deven Osceola was one of three students who designed the promotional materials. Originally, he wanted to be a video game designer but came to the workshop to try his hand at graphic design. He looks forward to coming back next year.

“I learned a lot about myself during my time in this workshop,” Denise Osceola added. “You never know how it’s going to be [until] you try it out.”

While Echo-Hawk was transforming a blank canvas into a “Modern Day Warrior,” the SMPW participants covered the event by using the tools they learned while in the workshop: journalism students reported and photographed, broadcasting students shot video and technical production students staged the lighting and audio.

Maleah Isaac had a great time while in technical production. Prior to the event, Isaac assisted in arranging everything from the soundboard and lights to the wires and cables.

“I actually had fun; I learned a lot,” she said.

Isaac plans to attend community college in Mississippi to play basketball and might take a class for technical production to increase her skill portfolio.

Frank said the students got real world experience and learned the importance of being flexible in real life scenarios – it helped teach the kids an important message.

“You always got to finish what you started,” she said.