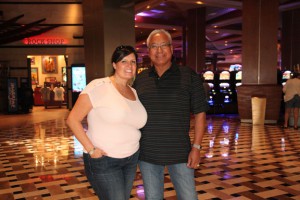 HOLLYWOOD — Joe Osceola Jr. created Osceola Operations LLC in 2005 to do business with the Hard Rock in Tampa. Now his company, which specializes in the hospitality industry, is busier than ever selling items to all the Hard Rock Hotels, Tribal casinos and restaurants.

“Getting into the Hard Rock was very hard,” Joe said. “They had their business relationships already; no one likes change. There was a lot of competition.”

There is still competition, but as a Tribal vendor Osceola Operations gets first right of refusal for jobs, submits bids for projects along with non-Tribal vendors and has the opportunity to get a lot of work.

The company supplies items for guest rooms, public spaces, restaurants and casinos. They have seven brand standards in place – meaning that to refurbish the supply, the hotel must go through Osceola Operations – but the company strives to add more. Those items include flat-screen televisions, iHome clock radios, box springs and mattresses, bathroom amenities and TeleAdapt wireless technology for cable and Wi-Fi.

“Thanks to the Purchasing Department, a lot more jobs are being bid out,” said Jody Osceola, who works with her father, Joe. “We work hard to get the jobs. You work within the guidelines you are given and hope to do your best.”

Getting the job means getting the best price for the client, whether it’s the hotel, casino, restaurant or other business. To do that, Osceola Operations attends trade shows nationwide in search of sources for items and for meeting with manufacturers’ representatives.

“Sourcing the stuff is the hard part,” Jody said. “We try to source our products as closely to the manufacturer as possible to keep the prices down. We’re always looking for more sources.”

Competition is fierce and grows every year. The company competes against non-Tribal vendors, mainstream retailers and Tribal vendors, and their challenges include getting the best price for the Tribe and meeting their deadlines.

“Whatever anybody wants, we can find it,” Joe said. “We try to go straight to the factory and stay away from the middleman.”

Other businesses not affiliated with the Tribe often find Osceola Operations. The company will do business with anyone but does not aggressively seek mainstream retail clients. They conduct most business via email and other online communication.

The Osceolas envision the company expanding over the next few years.

Joe is interested in light-emitting diode (LED) lights and is talking to Hard Rock about replacing their expensive, heat-producing halogen lights with more energy efficient LEDs. Another business opportunity in that field has Joe in talks with a Chinese company about opening a factory on a reservation.

“We would like the Chinese company to come here to any reservation, any Tribe,” Joe said. “It would be under the umbrella of Osceola Operations no matter where it is located. I also see a future in solar panel farms. A lot is going on; we can’t just stop at one thing.”

Jody wants to expand the rapidly growing company but knows that doing so will require more money.

She is investigating federal loan programs for Native Americans through the Bureau of Indian Affairs, Small Business Administration and the Department of the Interior. She believes that Osceola Operations can expand to businesses throughout Indian Country and that utilizing their Native American status for funding will be key to future growth.

“The best thing is watching the business grow; having my daughter work with me is a big plus,” Joe said. “I don’t know what is going to come tomorrow, but we keep looking and keep going.”

“I would have come on board a lot sooner had I know how great it is,” added Jody, who started working at the company about a year ago. “Working and learning from my dad has been so rewarding personally. On the business side, getting to work with the Tribe and contribute to its growth and prosperity is important to me.”

Osceola Operations can be reached at www.osceolaoperations.com.