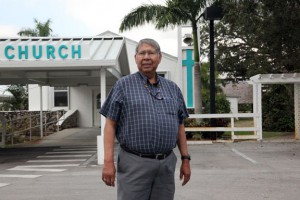 HOLLYWOOD — Paul Buster can be described in many ways: language teacher, musician, father, grandfather, pastor. But when asked to describe himself, he has a very simple answer.

Born in Big Cypress to Junior Buster and Mary Annie Osceola Buster, Paul grew up in a camp on the reservation. One of his earliest memories is of the natural state of things; he clearly remembers the abundance of native plants and animals. Most people at that time were full-blooded Seminoles, and everyone spoke only Elapoonke, or Miccosukee, as Paul refers to it.

“The elders told us the language was Elapoonke, but most people today call it Miccosukee,” Paul said. “I was taught to respect my elders, which is natural for anyone, or it should be.”

Technology was slow to arrive in Big Cypress, but Paul’s father had a large, old, battery-powered AM radio on which they listened to the Grand Ole Opry from Nashville.

“There were hardly any other radios in the area, and we would listen to the Opry on Friday and Saturday nights,” Paul said. “If you get in the right spot, you can still pick it up today.”

His family’s camp was far out in the swamp because his father maintained water pumps for road construction projects. Paul grew up in a Christian environment, although his parents also adhered to Tribal traditions, customs and language.

Playmates in his camp were rare, so he went to other camps to get together with children, play softball or swim in a nearby pond. His first experience at school was in a one-room schoolhouse on Big Cypress, where the teacher taught all the classes from first to fourth grade.

Buster grew up speaking only Miccosukee, but he learned a little bit of English at the school, which had about 30 students. In fifth grade, he was sent to a public school in Clewiston, 40 miles away, where he finally learned English.

Paul married while still young then left high school and earned his high school equivalency diploma. A few years later, he attended the Baptist Bible Institute in Graceville, Fla. and earned an associate degree, as spirituality has always played a large part in Paul’s life.

“I got through the courses and could have stayed longer, but I came home,” Paul said. “Two or three months later my mom passed away. It seems like God brought me back so I could be with my mom when she went back to be with the Lord.”

In the 1980s, Paul was a water manager for the Big Cypress cattle program, where he was responsible for the water level in the pastures. He made sure the pastures were irrigated in the dry season and water was pumped out of the pastures during the rainy season. In the 1990s, he moved from Big Cypress to Hollywood and served as a layman at the First Seminole Indian Baptist Church. He became a pastor in the late 1990s.

A language teacher in the Hollywood Culture Department since 2000, Paul spends a lot of time teaching preschool children, as well as adults.

“A lot of adults need to brush up or just learn how to speak the language,” he said. “It is really important for our people to keep our language; it is what makes us who we are. Our people don’t really take advantage of it, but when they do, I spend time with them.”

Many people know Paul as a gifted musician; he plays guitar, writes songs and has a band called Cowbone. His music is a blend of country, folk, gospel, church and Seminole stories but has a real country flavor because of the use of a steel guitar and dobro. Cowbone can be heard at many community events and the annual Tribal Fair. Paul has recorded two CDs, with plans to make another this year, and views his music as a significant accomplishment in his life.

“My dad couldn’t afford a good guitar,” Paul said. “I have a couple of good guitars, among many, including the legendary Martin D-28. My dad always talked about that kind of guitar, so I got one a few years ago.”

But his greatest accomplishment by far has been serving the Lord.

“It’s a life like no other job,” Paul said. “Someone asked me how I get my sermons. Once I was sitting in my music room and there was a cap that belonged to my son. It says, ‘Just Do It.’ I was looking at that cap and it just came to me as a topic for a sermon. I applied it to a scripture and it came out a sermon. Mary the mother of Jesus said to the people about her son, whatever he tells you to do, just do it. Pastors are led by God’s Holy Spirit, and they get their messages in different ways. Sometimes it’s from hearing children talk or seeing things in the environment. God sends messages to me in different ways.”

As a pastor, Paul is often asked to lead a prayer before community events, say words after someone passes away or just offer support.

“It’s a round-the-clock responsibility,” he said. “You have to be available any time to be around people. Sometimes I don’t say anything; I’m just there.”

Paul has witnessed enormous changes in his life, including the good fortune of the Tribe.

“The change was like night and day,” Paul said. “Some changes have been for the better, but some have brought sadness. However, the Tribe progressed to making revenues, and we have better programs now to take care of us. It was quite a change from the 60s to present day, which is wonderful because it benefits the Tribe.”

Although he has experienced great change in his life, he does not live in the past. He appreciates modern communications and has his own Facebook page.

Buster’s first marriage was to Daisy Jumper, with whom he had three sons. He has been married to Meg Buster for nearly 20 years, and they have two daughters.

Paul was predeceased by two sons, Merle Hank Buster in 1996 and Ira Billy Buster in 2007. His surviving children are Paul “Chunky” Buster, of Big Cypress, Melissa Metcalf, of Hollywood, and Jessica Buster, of Davie. He also has three granddaughters ages 12, 10 and 4.

In addition to blood relations, Buster has many other “children” around the world. He was a host for exchange students for eight years and still keeps in touch with them; they even call him Dad.

As for the future, he looks forward to more of the same and even better for the Seminole Tribe.

“I want to just keep serving the Lord as long as I’m physically able,” he said, “and write more songs, some poetry and be a friend to anyone who needs a friend.”